The Law of the Conservation of Hair

Errata to The Fugue of the Undreamable Abyss

The Law of the Conservation of Hair Rachael K. Jones

That it has long been our joke that our hair lengths are inversely proportional, and cannot exceed the same cumulative mass it possessed on the day we met;

That our faith was bound by this same Law, your exuberant pantheism balanced against my quiet nihilism;

That this Law does not apply to beards;

That you were the long-haired hippie boy, born too late for Woodstock, and I the butch bisexual with a pixie cut marching beside you in the climate change rally;

That we shared the same celebrity crushes—Michelle Obama and Nicolas Cage—and this surprised and delighted us;

That on our first date, we solemnly swore this vow: if we ever found a wardrobe portal, take it; or a TARDIS, hitch a ride; or a UFO, board it without hesitation;

That for such an act we should forgive each other implicitly and completely, because there would be no time to ask, and you might only get one shot;

That brides traditionally grow their hair long, and mourners shave it;

That I shaved mine anyway;

That you wore tiny white field daisies gathered by your niece in your braids, like faraway stars;

That you wore them in your beard too, except one you plucked for the Justice of the Peace to press in the pages of her Sufi poetry book;

That though we both had liberal arts degrees and too many strong opinions on Sappho, we loved the stars, and the phases of the Moon, and B-grade sci-fi cheese with rayguns and swamp things;

That we were both the type to volunteer when no one else would;

That when, in the strength of my passions, I rushed headlong into a cause, you would be the sword wielded by the arm of my conviction;

That the best swords are alloyed and folded many times upon themselves;

That I believed in peace above all else, because life was short, and we were mortal, and once life was lost, it ended;

That you believed in peace too, but for opposite reasons;

That no one had yet survived First Contact, and the ships had been recovered empty and adrift, the astronauts completely vaporized;

That I pointed out how this was an absurd conclusion, because all matter, like hair, has to go somewhere;

That fear is an easier thing than hope;

That the fleet drew nearer each day;

That Earth wanted to launch a nuclear arsenal;

That they were running out of astronauts;

That you didn’t ask me before you signed us up for the mission to babysit the shuttle’s payload;

That I didn’t mind;

That they made you cut your hair before we left Earth so your helmet would fit properly, but I had to grow mine out for the same reason;

That you stopped praying that day, and I quietly started;

That we passed the time on the shuttle to the asteroid belt reading aloud from Carl Sagan;

That we agreed the aliens were surely made of star stuff too, in their flat black triangular fleet falling toward Earth like a cloud of loosed arrows;

That they came upon us while we slept, and we jolted awake in our sleeping bags when the shuttle jerked to a stop;

That when we radioed them, they bathed the cockpit in shimmering blue light which tickled my nose like ginger ale fizz and made me sneeze;

That instead of hitting the launch button, we waited;

That it was just like on Star Trek when we disintegrated, like Scottie beamed us up, except nobody asked permission first;

That we reappeared on their craft, whole and sound and long of hair;

That they had followed the climate change rally too, and taken pity on our plight, and this was a conservation effort;

That I insisted they send us back to explain;

That when I rematerialized on our shuttle, you didn’t return with me;

That you did it on purpose;

That it was, after all, the deal we made;

That I was angry anyway;

That I blasted Nickelback over every radio frequency as your punishment;

That the fleet answered me with mandolin music, distorted as in a dream;

That every sword is wielded by the arm of a conviction;

That every arrow is loosed toward a bullseye;

That all matter—not just hair—is conserved, neither created nor destroyed;

That it is all the stuff of stars;

That the stardust would love me in any form, and I him;

That we will always expand and diminish ourselves for each other’s sake;

That we will take turns being the rock or the slingshot, so we may fling each other into adventure;

That I jettisoned the payload;

That my shuttle shot homeward in a cloud of arrowheads;

That the arrows arced over the Earth, but did not strike;

That from the ground, it looked like long, dark tresses threading through the night sky;

That the bright white stars above flashed like a field of daisies;

And that when they fetched me dripping from the cold grip of the sea, the first thing I did was shave my head, as if for a wedding.

Previously published in Toasted Cake, 2016. Reprinted here by permission of the author. 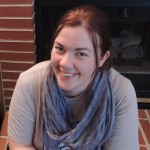 Rachael K. Jones grew up in various cities across Europe and North America, picked up (and mostly forgot) six languages, an addiction to running, and a couple degrees. Now she writes speculative fiction in Athens, Georgia, where she lives with her husband. Her work has appeared or is forthcoming in many venues, including Shimmer, Lightspeed, Beneath Ceaseless Skies, Flash Fiction Online, Fireside Magazine Accessing the Future, Strange Horizons, Escape Pod, Crossed Genres, Diabolical Plots, InterGalactic Medicine Show, Fantastic Stories of the Imagination, The Drabblecast, and  Daily Science Fiction. She is an editor, a SFWA member, and a secret android. Follow her on Twitter @RachaelKJones.