It takes a witch to make a queen’s lipstick. Hogfat, crushed ants, frozen embers, lead. Good lipsticks should burn. I, who had mixed oil and beetles and chilis into pastes and powders, had seen good people incinerated by those ocher smiles. The Queen of Algae and Urchin had asked that I squash rebellion with face powder, which would mark forever those who desired another ruler–or to rule themselves. Upon receiving this request, I fled to the Queen of Geodes and Mica, who received me with open arms. She kept me busy with lipsticks and eyeshadows and kohl until the day she requested that I create a face paint for children that would dispose of those heirs without a drop of her blood. Upon my refusal, she threatened prison, her dogs, my death, and I locked myself away in my workshop to think.

Having no other skills and a newly-acquired distaste for the destructive whims of the most powerful, I stole away in the night, to a kingdom far away. There I set up shop not as a witch, but as a woman, talented in powders and pigments. A woman who wished only to sell beautiful things.

I turned with joy to a simpler life after so many years in palaces. The shop was mine alone, with solid cedar floors and walls that kept out the wind. A little hideaway in a kingdom where a new queen had come to power, one I had never met, one who I hoped would never know my name.

But my new queen’s messengers arrived two days after I had rented the shop, when I was still sweeping the floor and rubbing oils into the corners where the dark comes in. I thought I’d disguised myself well enough. When I saw the messengers’ shadows on my threshold, I knew that I had failed.

I was brought to her lady’s maid, who asked me for an eyeshadow, one that would see through lies. I refused, of course, claiming retirement, claiming my magic had fled, claiming the tired bones and shaky hands of an old woman. Just one last powder, the maid requested, a tax for my entry into the kingdom.

“Deliver the powder by tomorrow,” she said, her eyes dark with fear, “and then she will leave you to your peaceful retirement.”

I toiled all day and night. Belladonna, hemlock, owl feathers, carrots, mercury, and other things of which I cannot speak. In the morning, I handed the woman a small vial. One drop daily. The lady’s maid shook with relief. I wished I could advise her, too, to leave the service of queens. But I was not yet free, not yet a heartening example for anyone.

Upon applying it, my queen canceled her trade agreements with the Queen of Salt and Fire, having seen too much or perhaps too little.

A month later, the messengers arrived in the middle of the night. They took me into the canals beneath the city. Under the palace lay a great underground lake, which my queen used in lieu of dungeons. Our boats met by torchlight. My queen was beautiful in the way that power creates a certain magnificence in the wielder.

She asked for a powder, one which would conceal that which she wished hidden. I asked, of course, about my retirement, about our agreement. She claimed the lady’s maid hadn’t told her; that this, at long last, would be my final work of art; that she needed, in these trying times, just one more small favor. The reward for my small act of service, she promised, would be great.

The water lapped at our boats, rocking them, and there were monsters in the depths. I knew that, should I refuse, I would never see the land. Shaken and furious, I agreed.

Chalk, flour, rue, the scales of snakes, and the last lie in an old man’s life. When the messengers came, I had one pouch of powder for them, but only one. It seemed the best way to remain alive.

The next day, one of her counselors disappeared. A tragedy. The man was never found.

A queen born into power, after all, will never rest content with the kingdom she possesses. Every queen wants more. Power gives no satisfaction, only an insatiable hunger. My queen, like all queens, wanted the world. I could not believe she would leave me be. I didn’t know where else to flee. I spent many nights looking at the ceiling above my bed, not sleeping, just waiting.

Barely a fortnight later, she summoned me to her chamber. Tapestries covered the walls and light coated every surface. She said I could have all these riches and more if I could complete one final task. A lipstick, she said, one that carries my words from ear to ear. Make it impossible for anyone to say no to me.

Lipsticks require gemstones and mulberries and blood that never rots. My hands shook over the potion. I was so tired of the whims of queens. It was clear that, as long as she ruled, I would have no respite. It was clear that, if I could not live safely, I must try for something else, for justice.

This time the messengers took me to her throne room. I held the bottle of crimson liquid in my hand. I could not keep from quaking. She had mistaken me for a woman who loved wealth over all else. I had not bound the lipstick to her; anyone who painted their lips with that molten ocher could use it to command.

Faster than she or her guards could interfere, I scooped my finger into that pool of scarlet and smeared the whole of it on my lips.

“Down with the queen,” I said.

And the word spread. And the people obeyed. 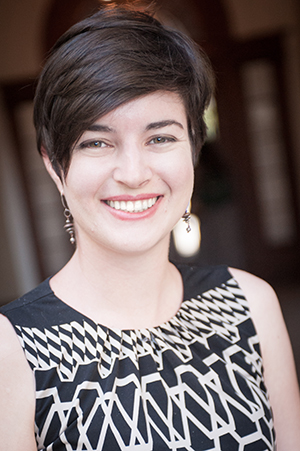 Audrey R. Hollis is an MFA candidate at Purdue University. Her fiction has appeared or is upcoming in The Pinch, The Los Angeles Review, and Lady Churchill’s Rosebud Wristlet, among other places. You can follow her on Twitter and Instagram @audreyrhollis or go to her website at www.audreyrhollis.com. She lives in Lafayette, Indiana with her wife and cat.