It’s spring when you arrive, or what passes for it in the Northwoods. The ground is still frozen because otherwise, you’d have to wait months for it to dry to get all the equipment in. It’s cold and your knuckles split from having to swing the axe in the dry air, but it beats Milwaukee. Beats packing meat and avoiding the mean looks and having to fight for an extra blanket at the boarding house. It’s just a skeleton crew this early, you and ten others and not even a real camp because you have to build it before the others can arrive. But it’s extra pay and you don’t mind the work or the company. You’re paired off in tents and Holstegg and you have found excellent ways of staying warm.

The first thing you need to look for is the flower. Every dryad has one that blooms year round, even in this snow-blasted place. They hide them, though, so you have to look closely, circle each tree in a slow dance of intent. Sometimes it’s only the smallest of things, a snow-white bloom where there should be only evergreen. Or a splash of fire red in a sea of oak.

Holstegg tells you of life on a farm, twelve siblings, and no neighbors for a day in any direction. You shiver and he pulls you to him, his chest broad and his blond beard tickling the back of your neck. And he tells you the stories his parents would weave of the old country, of magic and witches and talking bears. You ask if there were any blond ones and the sound of his laughter echoes through the camp.

The second thing is the slow breathing. All trees breathe, and you’ll be able to see it if you’re around them long enough, but dryad breath is different, escapes out through a single concealed mouth, and if you wait long enough you’ll see the heat of it fog the crisp air.

You bathe in a cold stream and sometimes Holstegg has to break the thin sheet of ice with a rock. Never an axe, he knows, because that would promote rust. You try to wash yourself clean but sex still tastes like pine sap and sweat. It’s the happiest you’ve ever been. The other men at camp know full well what you’re about, you and Holstegg, but most of them believe it’s just something men do out here, in the woods. That it’s some sort of skin you’ll remove when you get back to where you can buy a woman and a hot meal. And the others, the others who seem to see in your eyes the same desperation you see in theirs, they laugh right along despite the tightness in their chests.

The third thing is that dryads thirst for human blood. Take off your gloves and rub your knuckles against the bark and the dryad will shudder in delight. This is the easiest way to tell but also the most dangerous, and should only be used as a final confirmation after you have strong suspicions and have checked for the other signs. Dryads can, if pressed, uproot and move, attack when threatened. You must be careful.

True spring comes, and then summer and the rest of the jacks. The camp is full and you and Holstegg are allowed to keep your tent. With so many people there’s more danger now and your voices are not so loud when you speak, and there is fear hiding in the lilts of your laughter. Still, it is better than the city, better than anything you have known. Does it matter that it seems more fragile than a poplar, likely to fall over from a strong wind or bounding deer? Does it matter that autumn looms and beyond that winter and a return to everyone you want to escape?

A dryad heart will fetch three hundred dollars if you sell it to the right shops in Milwaukee. The wood from its body will bring in another fifty dollars a yard. It never rots so you can bury it to avoid the lumber boss’ watchful eye, can return right after the season ends, right before the cold freezes it in the ground. Dryad tears can be jarred and are worth nearly a hundred dollars a quart. If you’re busy enough you can make enough in a single year to live off for the rest of your life.

You have a dream. You and Holstegg buy a farm and live there and nothing bad ever happens. No neighbors mean no fires in the night. No scrawling messages on the sides of buildings. No sermons aimed at your hearts. You just need enough money for the land and the necessities. You just need a little help…

You stand with your bloody knuckles against the bark, listening to the soft moan of the wood beneath. The axe almost feels light in your opposite hand. You lean forward so your lips are nearly brushing where its mouth is hidden, where every so often a gust of warm air washes over your face.

“Come away with me,” you say, and you whisper your dream, of a small home ringed by tall shadows. Not safe but safer. Not perfect but beautiful. And the rest of the camp will wake one morning to find you gone, and Holstegg too, and upturned earth where certain trees once stood. 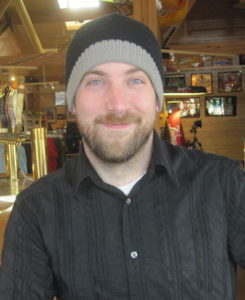 Charles Payseur is an avid reader, writer, and reviewer of speculative fiction. His works have appeared in The Best American Science Fiction and Fantasy, Lightspeed Magazine, and Beneath Ceaseless Skies, among others, and many are included in his debut collection, The Burning Day and Other Strange Stories (Lethe Press 2021). He is the series editor of We’re Here: The Best Queer Speculative Fiction (Neon Hemlock Press) and a multiple-time Hugo and Ignyte Award finalist for his work at Quick Sip Reviews. When not drunkenly discussing Goosebumps, X-Men comic books, and his cats on his Patreon (/quicksipreviews) and Twitter (@ClowderofTwo), he can probably be found raising a beer with his husband, Matt, in their home in Eau Claire, Wisconsin.