The morning after the storm, Carlotta climbs onto her roof with a mug of orange tea and looks over Hialeah Bay. It stretches, glittering, to every horizon. The waves swept the flooded yards and streets of chemical slicks and litter. The winds blew away the stench of moldy homes and rotting plants. And the rain gave a good scrubbing to everything left standing. Carlotta takes a deep breath and revels in the bright blue calm until she hears an airboat roaring down 17th Avenue.

Not scavengers, she thinks. They don’t use the streets to navigate, knowing the area well. The grocery boat came through three days ago, the tinkers won’t reach her block for a week, and Homeland Security could care less about Gladeville. They’re probably busy keeping looters away from the pass-throughs and floating resorts on the remnants of Miami Beach. The boat slows at the corner so the pilot can check the signpost, then it glides down her street with two little girls and an old man aboard. Carlotta can’t believe it. Tourists. Already.

She puts down her mug, clambers to a chest and yanks out a paintball rifle. One shot’s all she usually needs to send these vultures flying back to their own troubles. Carlotta peers through the sight. She aims over the girls’ heads and finds the old man staring at her. She blinks and looks again. It’s her father. She fires.

He ducks, shielding the girls. The paintball hits the pilot, who swears and starts to bring the boat about. The old man snaps his fingers and points at Carlotta’s house. She fires again, knocking off his sunglasses. The girls scream, the pilot shouts, but her father jumps out and sloshes toward her, red paint dripping down his cheek, the rising tide beating at his thighs.

No sense wasting more paintballs. Carlotta unpockets a pistol and levels it at her father’s heart. He doesn’t stop. She doesn’t fire. Beside the stump of her mailbox post, he says, “Your sister’s dead, gorda.”

Carlotta lowers the pistol and looks at the girls. “They hers?”

“Ours now,” her father says.

Carlotta laughs. “Clever hustle, Papi. Sick, but clever. Get in the boat. I’m not leaving.”

Her father pulls a piece of paper from his pocket, unfolds it and holds it up.

Carlotta reads it through the rifle sight. A death certificate. Luisa’s. She lowers the rifle.

“I can’t raise them with your mother gone,” he says.

“What would you know about raising children, right? Find another wife.”

“I found my daughter. Finally. I need you home.

“You know what I’ve learned out here, Papi?” Carlotta waves her pistol across the bay. “Home’s just where you are. Until you’re not.”

“Home is where they send one of these.” Her father snaps the paper at her. “If you die out here–“

“If you die out here, I won’t get even this. You’ll just float off and disappear.”

“I already have. You should’ve left it that way.”

Carlotta laughs again. “Look around. You won’t be standing much longer. Might as well get used to it. Same way I stood my childhood. Got used to it and waited for the end.”

Her father smiles. Carlotta shivers. She’s given him an opening.

“Is that what you want for your nieces, then: me?” He taps the paper against his chest. “I still work late. I still get angry. I’m still a cabron.”

Carlotta looks at the girls. They look at their hands. She did that too when her father looked at her. So did Luisa.

“I also said, ‘Don’t be stupid.’ That shack of yours won’t last six months.”

“We’ll move then. There’s plenty of places to squat. More each day. Wherever you call home, it’ll flood too, soon enough.”

Luisa lifts her chin to keep from looking at her hands.

Her father flings the paper aside and trudges to the boat.

Carlotta calls to the girls, “Lo siento.” The little one raises her hand just enough to wave. The big one slaps it down as their grandfather crawls into the boat. He snaps, and the airboat roars off.

When Carlotta can’t hear it anymore, she goes back to her tea. It’s cold, and all she can see of the bay is the paper floating away, waving like her niece’s hand. You should get it, she thinks. For their address. Just in case. 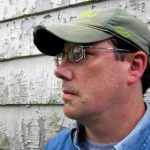 Stephen S. Power‘s first novel, “The Dragon Round,” will be published by Simon & Schuster in July 2016. His short fiction has appeared most recently in AE and is forthcoming in Daily Science Fiction, Lightspeed, and Amazing Stories. He tweets at @stephenspower, his site is stephenspower.com, and he lives in Maplewood, New Jersey. He’s currently at work on “The Dragon Tower,” a sequel to his novel. Secretly he’s also plotting a second series, “The Dragons of America,” and several novellas.