Truth be told, there might honestly’ve been just a solitary other instance where I decidedly got one up on the Dickhead. Had to’ve been among the last times I was home before, you know, the end. I’d finished up school in the spring and found work at a Nu-2-U downstate, spending my days shuffling Playstations in and out of hawk while sweating out my nights in my studio apartment drafting diagrams of whaling ships and other obsolete boats, and with August upon me and still feeling, I guess, like the summer’s end’s change was coming (although school would prove to be out for good as far as I was concerned), I got myself high enough to peaceably merge into the infrastructure of Friday’s northbound traffic with a larder of secondhand presents for Na stuffed inside my trunk. A toaster oven and one of those Italian stovetop percolators and a turntable and some LPs I knew she’d melt over. Like, evidence of both my love and gratitude and also that her boy’s now a grown, working man.

So I roll in late and sleep hard in my old bed and that Saturday morning while Na plays with all her new toys—making endless rounds of buttered toast and coffee while Uh-huh revolves on the platter—out of nowhere (which is where every battle in our stupid war comes from and goes: fucking nowhere) the Dickhead and I start in arguing about a proposed shipping terminal and pipeline for oil tankers roundabout Calais way. His thoughts are that it’s a good idea, jobs and industry and the whole party line. I say it’s Passamaquoddy land so not really ours to decide the use of. Which apparently is the wrong tack to follow. Before long, Dickhead’s calling me a mouthy little bitch and is threatening to shoot my face off if I don’t quit my lip—all on account of we disagree, mind you, as to how a group of strangers in a whole nother county should or shouldn’t utilize their sovereign land—and I guess I’ve just heard that line one too many times in my life to let it slide again. So with the Dickhead standing there by the woodstove like Cotton Mather with his one crooked finger leveled at me and my contemptible point of view, I take from my pocket a stainless steel butterfly knife—something else I picked up from my work—and open it real slow and deliberate. Not like a gangster in a kung fu movie, whipping the blade around in some confusing and dangerous dance. More like a specialist with an exacting tool.

And I tell him, “Dude, if it really matters that deeply to you, why don’t we test the measure right now.”

Wicked tender-like, I take his hand to curl his fingers tight around the handle.

With both mine, I guide his hand until the knife-tip pokes my throat.

“I know it ain’t one of your guns,” I say, trying to find the sweet spot that’d catch both my jugular and windpipe in a single deft jab, “but I think this ought to do the trick,” and it’s right about now I notice for the first time ever how strangely pale his eyes are. “Demonstrate how much it really means to you, Levi.” Like those beige M&Ms. You know the ones I mean? The color they discontinued. Pale and sweet. The ones they replaced with blue. I lean my throat a little deeper into the blade. “Prove how little I care.” My stepfather’s eyes are another era’s M&Ms. Still no response.

And you know, if I hadn’t already another agenda, it’d actually be disappointing, the Dickhead’s total lack of gall. I snatch back my knife and leave him there standing agog like a stooge while I take again my seat, finish my toast while the butter’s still melty. Leave the blade open on the table. Just in case he changes his mind. A thin red runnel tickling down to my collar.

Meanwhile, eyes closed, Na shudders and sways her neck and shoulders in a quiet little dance with herself, humming along to the turntable’s John Cougar song: I’ve been doing it since I was a young kid and I’ve come out grinning…

And to hell with all else: it’s nice seeing Na some kind of happy. Even if it’s only just a little. Even if it’s only because she’s choosing to not see the everything going on around her. A morning at home gone a few minutes unruined. Her dancing’s all the victory I need. Even if it’s only for a second or two before the warships come crashing in. 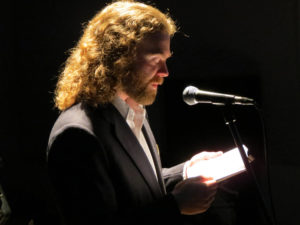 Douglas W. Milliken is the author of the novel To Sleep as Animals and several chapbooks, including The Opposite of Prayer and, most recently, In the Mines (in collaboration with the musician/documentarian Scott Sell). His stories have been honored by the Maine Literary Awards, the Pushcart Prize, and Glimmer Train, as well as published in dozens of journals, including Slice, the Collagist, and the Believer, among others. www.douglaswmilliken.com.