White as china, she is, a new polished plate, ready to be broken. She ain’t more than ten-and-fifteen, made very tiny by the master’s heavy, black overcoat what’s thrown about her shoulders. I stand back as the door swings wide, the carriage crunching away over the gravel, her boots tipping and tapping on the step, not wanting in but not keen on staying out, neither. I’d tell her to bolt, to run screaming, but there ain’t no-one what can see me. Her skirts swoosh into the parlour, and there’s that rattle and clank of buckets, as the maids make ready her bath.

Maud’s her name. The morning sun has her propped up in her nest of feather quilts, her eyes bold and bright. There’s food on a tray aside the bed — poached eggs and bacon and sweet, milky tea. At first. As soon as the master starts his work, they quick lose the stomach for it.

“Will it hurt?” she mutters to herself, shaping the burnt rind into the curl of a question. I think of her mother, weighting her empty heart and home to the velvet sack of shillings in her pocket. Think of a sweetheart, perhaps, seeing her face, for a while, in every passing flower-girl; her shape forming in each swirl of steam from the trains what growl across the arches. But they’ll forget.

“I daresay it will,” I whisper. I stare out over the spindly trees and the tall metal gates, run my fingers over the frost what’s gathered on the inside of the glass. I don’t feel nothing, and I’m glad for it.

“Consumption. To be consumed, to be eaten up, to have all that is superfluous burned away, in one glorious moment.” The master and his men talk in the parlour as I stand outside. I put my face to their long coats on the hat-stand, choke back the smell of January rain and the suffocating smog of the city. “A woman is most beautiful on the brink of death. It is capturing the apple at its ripest before it starts to decay. There is beauty in death, and in death there is art.”

There’s a creak on the stairs behind, and there’s the young miss, crept out of her room in her white nightgown, her head tilted to the side as she tries to make sense of their fancy talk; the way they tried to make right what they did. There was those, rich and poor, that got the consumption the same, but to be given it? The master starts fires just so he can watch it grow; to see it all cinder at his making. He calls it art. It ain’t. It’s a crying shame.

“Who shall bring me roses,” Maud sings to herself, that old music hall song what sends me back to dizzying dances in smoky taverns where the wallpaper hung in peels and the piano never stopped thumping. She sits at her table, staring at the skull what’s peering back at her from the looking glass.

There’re handkerchiefs spotted with blood about her. Her cheeks are flushed. She’s a candle teetering over the short wick and burning wax. She runs a brush through her thick, damp hair, then stops, lets it clatter to the floor. She coughs, stares down at her blood-splattered palms, and laughs, near weeps, wipes her face and leaves her chapped lips smeared with brown. She sings, “Will it be you, my love, my love, will it be you?”

From his studio, that rotten smell of turpentine seeps. The master’s brushes scrabble against the canvas like rats across the attic. There’s a clink as his paintbrush meets the water, a cough-cough-cough as he talks sweet to her, his voice mumbled through his mask, as the young miss gasps and sobs. He’ll wear her tear-trails on his waistcoat like diamonds, keep her heart what he stopped in a small, silver box.

She went on a Wednesday six-month later – took very quick– and was dropped into a pauper’s grave on the edge of St Giles. Her portrait hangs in the master’s gallery. Her heart’s locked in his dresser, next to mine. The master did me when I was ten-and-four, his voice soft as he held the poisoned rag over my mouth, making me breathe in, and out, until my lungs were full with it. He’s got friends in the sanatoriums and the hospitals and the morgues. Friends in the museums and the galleries. Friends in places so high it crooks your neck just to think of ’em, especially when you’re born so low.

“Where you were plain, Esther, now you are pretty,” he told me, his eyes shining terrible over his mask, “men will look at you, for centuries, and they will marvel.”

Maud stands aside me by the empty fire, and through the window we watch the carriage come clattering in.

“Queer how people should have a taste for it,” she says, dusting down her frock what’s still damp from the ground. “For paintings, of dying girls. Well, at least we shall be remembered, I suppose.”

I don’t say nothing.

Feet shuffle across the gravel, and in the lamp-light I see an auburn lock shivering loose from a dirty bonnet, a girl half-drowned by the master’s heavy, black overcoat. I fancy I hear her skirts swooshing into the parlour, the rattle and clank of buckets as the maids below stairs make ready for her bath, the door slamming shut, and one final gasp. 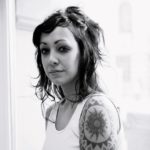 Nicola Belte is a writer of weird things, from Birmingham U.K. She is represented by Bryony Woods at DKW Literary Agency, and she is currently working on a handful of (mainly grim and gruesome) novels for Young Adult and for children, as well as many short stories. She also wrangles slush and edits for Shimmer Magazine. For other published works and general ramblings, say hello at nicola.belte@blogspot.co.uk