Our House is pregnant.

The Orderlies posted the news on our Noticeboard. No explanation, no fanfare.

We gather in the common room, silent, scarcely able to look at each other.

Then the room erupts. “They’re joking.” One woman, white-faced. A man sits and stares at his hands. Like he had something to do with it. “What happened?” seems the most common question. How could a bricks-and-mortar construction conceive with a human being? Sure, the House is sentient-sensitive and alien (brought in by one of those cursed freethinking long-haul astronauts).

The Orderlies observe us, in silence.

Later that night, one pats me on the shoulder. I leap up and nearly bang heads. He holds a finger to his lips. “Come with me.”

I obey. What choice do I have? We inmates signed a formal Agreement with the Counselling Service, which provided us with a free bed and lodging for the week. We were all grieving the loss of someone close to us, a fellow worker. That’s all we had in common.

The Orderly escorts me into the communal kitchen and closes the door behind us. “Don’t worry,” he says. “There are no bugs.”

“You’ve heard the news?” He looks closely at me. I nod.

“Please, sit down.” He pulls out a chair. I sit, rather heavily. “We’ll shift you to a secure House, first thing tomorrow.”

Dread forms a solid pit in my stomach. “Why?”

Don’t scream? I blink, scan the document, reread it, make no sense of it. Chemical formulae, blood readouts, DNA.

“The House is pregnant. Congratulations, you’re the father,” says the Orderly, softly.

I stare at him.

“Mr. Janssen, you heard what I said?”

“Your emotional levels, your distress at the loss of your co-worker, penetrated the defenses of the House. We understand, you worked so many shifts together.”

Again I nod. I’d never had a brother. James filled that gap in my life.

The Orderly goes on. “We now face the least expected outcome of space travel. Matter, impregnated by homo sapiens. We will shift you, for your own protection. Even among your inmates here, there may be unexpected prejudice.”

The Orderly observes me.

I try to keep my face calm, but fear, anger, confusion and above all, disgust well up in me. Suddenly I can’t hold it in. I vomit.

The Orderly cleans up. His face is calm.

I spent a sleepless night, and in the morning, they take me to another facility. My inmates are silent as I walk past them. Perhaps they don’t know. I hope not.

I’m rewarded with food, leisure, the best of everything.

All I want to do is escape.

In the end, I achieve this.

I find a job, live a quiet life, do nothing to draw attention to myself. Using a variety of aliases, I read up on what I’m accused of participating in. There are no words for it, and ‘taboo’ doesn’t cut it. I sleep badly and am inclined to overindulge in both alcohol and women. I never used to be like this. When my wife died, I grieved for a long, long time. Even now, I think the Orderly must have been yanking my chain. Objects can’t be impregnated.

Then the photos started arriving in my mailbox.

I stare at it and reach for the Johnnie Walker.

The next year, another photo. Bigger.

I sell up, shift, leave no forwarding address, and decide to swear off the grog. My new job is solitary. Except for my marriage, I’ve lived my entire life by myself. We never had children. Mary couldn’t, and I didn’t make a fuss.

Five years later, a large envelope appears under my door. Official. I hesitate. What the hell. Maybe I’ve won the lottery.

It’s a photo. In the ruins of a bombed-out city, the now-much-larger igloo stands undamaged. There’s a sign hanging from its front door. I peer at it. My eyesight is failing. I find my magnifying glass. The sign reads, “Hospital Withstands Aerial Bombardment Intact. All doctors and patients safe.”

I swallow. As a child, I dreamed of becoming a doctor. Later, I wanted to volunteer as an Ambulance Driver in a war zone.

The Igloo went to the war zone and withstood bombardment.

For the first time in many years, I break down and cry. Long, hard, wracking sobs rock my body. At last, I wipe my tears away and pick up the photo. 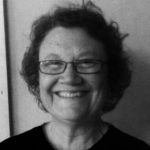 Brenda Anderson’s fiction has appeared in various places from Andromeda Spaceways Inflight Magazine to 50-Word Stories and Abstract Jam. She lives a few minutes from the sea in Adelaide, South Australia and enjoys long walks, unfashionable music (especially Wagner’s Ring Cycle) and movies. Animated films, especially The Triplets of Belleville, Up and Wallace and Gromit rank among her favourites. A longtime member of her local Baptist church, she tweets irregularly @CinnamonShops and doesn’t own a mobile phone.