On the Anniversary of Your Passing Thomas K. Carpenter

The first time you walk out of a blinding white door suspended in mid-air, I’m hiking the CT to forget the accident. Your sudden appearance makes me trip over a tree root and bust my nose. We hike for three days after that, but you have no supplies, only a stick of gum you had in your pocket when you went into the machine. While arguing about something I’d done two years ago at the Hepstone Bar & Grill, you slip on a scree field and break your neck in the fall. I mourn for three days before deciding it was a hallucination from dehydration. My nose still has a bump.

I’m in the bathroom at the Esquire Bar in downtown Sacramento on a date set up by my apartment building when you arrive from the third stall. After I injure my hand thinking I’d ordered your funeral in error, my date stumbles in. I lie that you’re an old fling, then the two of you hit it off and we go back to my room for haptic-kink play. The next day you get run over by a FunCar. I ID the body at the morgue, but there’s no record of your existence, so the resident aDoctor marks you down as a glitch in the data-sphere.

On business at the Siberian Meat Farms, you appear next to the culturing vats. I ask you about the accident, but you only remember stepping into the machine. You fall into a vat before we can leave. I swear off processed proteins and never look at a burger joint the same way.

These dates are a blot on my memories, an ink spot I cannot remove no matter how much I try. Pleading does nothing so I turn to printing an ever-increasing dosage of experimental medications. The bathroom mirror sends me to rehab when I wake up naked in an orbital hotel.

After your ninth appearance and death, I go to the Institute of Temporal Studies, but the building had recycled itself into a water retainment pond. No records of the company exist and the NDA on my memories prevents me from speaking to anyone about it.

Six more deaths in 2062. My calendar is filling up with anniversaries. I barely go a month without having to be reminded of you. It’s bad enough that you keep coming back, but now you haunt my schedule like a Gregorian virus.

I’m forty-six years old and nearly every week I’m having a toast to your memory. I wish that was the only time I drank. Your appearances have stopped accelerating. I’m not sure if this is good or bad. When I spoke to a quantum-archeologist, using hypothetical questions to avoid violating the NDA, he suggested that a theoretical time-traveler could accidentally pierce a hole in the multiverse. The other versions of you might slip through a temporal membrane, but the base universe would eliminate anomalies. It’s a theory.

Twenty-nine. That’s how many times I’ve had to watch you die. Twenty-nine more anniversaries to clog my calendar. I hate you. I hate the Institution. Why did you have to sign up as a beta tester? Your death is like a flooded river, overflowing its banks and choking away my life.

I was wrong about the acceleration. There are an infinite number of multiverses, each one with a version of you, each one sliding inexorably towards me.

On four-hundred-and-thirty-fourth version, I ask if you believe in the immutability of the soul. Instead of responding, you ask about the bump on my nose. This is a first. I explain the circumstances of the initial visit. Normally questions relating to past versions of you trigger an event that claims your life as if the multiverse has its own fatal NDA clause, but we talk all night and again in the morning after sex. You die a week later, but during that time I forget about the death anniversaries.

We spend a month together. Then two. The span is getting longer as if the multiverse is triangulating. The deaths are hard, harder than even the earlier ones, but I’m at peace. Rather than think about the reasons you went into the machine, I concentrate on present. On the now.

This gives us time to grow gills and explore the sunken ruins of Orleans; learn to carry ant farms in our bellies. In time, it feels like you’re not dying at all, except when you do.

It’s simultaneously the fiftieth anniversary of your first death and a full year of continuous existence. We celebrate by emailing ourselves to Jupiter and using titanium airfoils to fly through the Great Red Spot.

I don’t know if this means you’ll stick around. You could die again any day, but I’ve decided that for each version, you only die once, but you live many more times than that. You could say it’s an almost infinite ratio depending on how you want to quantify the time-signature of death.

On the anniversary of your passing, I want you to know that I’m sorry. You signed up for the experiment because I’d been ignoring you, busy in my day to day emergencies that really didn’t matter. It took a multiverse of karmic echoes to prove to me what I was missing. Even if you die again and we have to start over, I want to get this right.

FFO: What is the story behind your story?

TKC: The piece started as a writing prompt. I was only given the title and used it as the piece of grit to grow my pearl. I find title prompts to be some of my favorite ways of generating story ideas. Sometimes for my novel length projects, I only have vague ideas for the later books of a series, but when working with the cover designer, I have to have the titles decided long before the stories are written. I use the title as inspiration for some of the threads of the plot, or as a way to shift expectations. My favorite of these was the Mark of the Phoenix, the third book of the Animalians Hall series. I won’t spoil how the title influences the conclusion of the story, but I know my readers were thrilled by how it worked out. 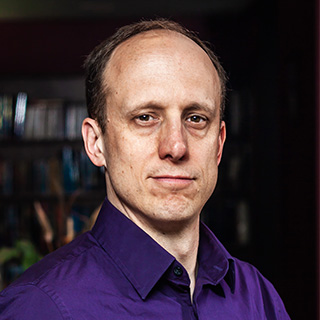 Thomas K. Carpenter resides in Colorado as a full-time writer with his wife Rachel. When he’s not busy writing his next book, he’s hiking or skiing in the great outdoors. His best selling Hundred Halls series has sold over 100,000 books and has over a 1000 five star reviews on Amazon and Goodreads.