A long time ago, I knew this guy named Agriellos Angriopoulis. Angry, for short. He lived on the top floor of a crummy old house at the east end of Chestnut Street. The only way to get to his apartment was to climb up the fire escape, into the bathroom window over the tub, but Angry didn’t mind. The rent was only one hundred twenty-five dollars a month, heat and water included, and Mrs. Petrakis in the apartment below left Styrofoam boxes filled with gyros or moussaka on his windowsill every afternoon.

A few weeks after I met him, Angry got a job with Asheville City Schools, answering their Help With Homework line. In those days, pre-internet, if you needed to know something, you had to either look it up in a book or ask somebody. Angry worked from home, sitting at his kitchen table, surrounded by carts full of library-loan references and encyclopedias. A big man of huge appetites, he liked to drink retsina straight from the jug and eat kalamata olives and fried chicken wings while he answered the phone, dressed in only a pair of XXL boxers patterned with pictures of the Acropolis.

At first, the answer line job was like quiz shows and crossword puzzles all day long. Angry loved it. “Quick, man, who wrote Oedipus Rex?” he’d holler to himself. He was an enormous hit on the phone, always ready with a joke or an interesting tidbit. “Hey, did you know the heart of a blue whale can be as big as a VOLKSWAGEN?” In the beginning, it was only elementary school kids calling him, then it was high school kids, then college kids, then even their parents.

I heard him one night around dinnertime. “Slice it up in quarter-inch slices,” he said. “Dip in beaten egg, then in seasoned flour to which you’ve added a tablespoon of cornmeal. Fry until golden brown, and drain on absorbent paper.”

He hung up. “Lady wanted to know how to fry okra,” he told me, biting into an olive.

He studied my face. I must have looked a little skeptical.

I guess it was inevitable, given the growing number of calls, that he’d have to decrease the detail of his replies. But soon, what it looked like to me was him totally fudging every one of his answers.

“Evolution or creationism?” a high school boy asked. Only one week before, Angry would have taken his time on a question like that. He’d have consulted multiple sources and discussed it from various perspectives: scientific, historical, religious. But that night, he didn’t open a single reference book.

“Lemon drops,” he said, and he hung up the phone.

“Angry.” I was startled. “You’re not even trying. Are you tired? Do you need some time off?”

He just stared at me, his face immobile, his eyes black and deep.

How deep is the ocean? Is goodness absolute? How does wood petrify?

Thousands of questions. It was a marvelous mystery to me: The more cryptic his answers, the more people called.

How many stars in the universe? Is time truly without end?

“What’s the secret of a happy life?” The supplicant’s desperate voice reverberated through the receiver.

Angry smiled a dreamy smile. “White-out,” he whispered, and he hung up the phone.

“White-out?” I said. I contemplated Angry’s answer. “Oh!” It struck me. “You mean it’s only when we realize no mistakes are irrevocable that we can ever be truly happy! An ever-ready supply of emotional correction fluid! Forgiveness! Oh, Angry!” I was weeping, and I barely knew why.

“Snap out of it!” He grabbed me by the shoulders and shook me hard. “When I was in sixth grade, I’d sniff white-out. I’d get dizzy, fall down, and look up girls’ dresses. That’s what I meant. I was happy back then.”

What’s the weather in Phoenix?

When we die do our souls live on?

Does anybody hear my prayers?

Suddenly one morning, after scarcely three months, Angry was gone. Out the window, down the fire escape. Just like that. On the kitchen table, beside the ringing telephone, he’d left a polished chicken wing bone wrapped in a snarl of his own coarse black hair.

I wondered, for a minute, what to do with it. Should I wear it around my neck? Should I boil it up and make it soup? Should I wrap it in satin and put it in a heart-shaped box?

“Oh, Angry, what does it mean?” I wondered. But only for a minute.

I picked up the ringing phone. 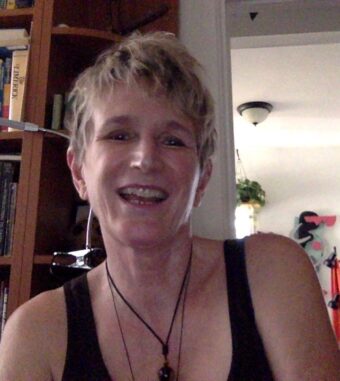