Our Cousins, Whom We Do Not Use As Directed Claire Humphrey

We are the alive ones. We have grown fewer with time. Our cousins stay near us in the form of objects although they are not of us any longer.

We moved through a wider world then: we traveled in a cloud over many waters. We visited grasses short and tender, grasses tipped with fluffy seeds, grasses yellow and sharp with drought. We visited mosses dense and emerald green, mosses star-shaped, mosses red and hairy, which grew on stones at the water’s edge. We visited ways cobbled with foot-worn bricks, ways graveled with red sandstone, ways paved with sections of weather-broken concrete.

We had our first cousin the day of the storm. Lightning broke from the ground and rent us apart, as we had not known we could be rent. After this rending, on the rain-soaked earth lay our cousin: a wheel, spoked, as from a bicycle. We gathered this cousin to us, but our cousin was not of us any longer. And we saw we were fewer.

We still moved through the world. We brought our cousin with us. Soon we had another cousin: the day of the shipwreck, when smoke poured from the engine room and then flame came forth, and the ship had to be deserted in tiny boats, and by the time our boat reached safety we had with us our cousin the wheel and also our new cousin, a brass compass the size of an apple. And we saw we were fewer.

One day we were rent apart more than any other day: cousins lay around us on the verge, on the track, on the meadow. We saw a great black scar where the explosion had scorched the earth and scattered us, and we saw other kinds of cousins lying there, red and torn. We knew these for the cousins of object-makers, and we had not known object-makers had cousins until that day. We left those other cousins for their kin to gather, as we gathered ours, and we heard object-makers’ voices crying out behind us long after we left that place.

We miss the grasses, the mosses, the ways.

We miss traveling in a cloud, as we did when we were many.

Our cousins cannot tell us what to do. If they speak, it is only among themselves; but they seem more separate than we are, and we are not sure if they speak at all.

We arrange them in a wide circle in the parlor, compass and boot and wheel and tiger rug, stone knife and patterned bowl and glass jar filled with ginger candies, dozens of cousins from tiny pearl bead to heavy anvil to nearly weightless skein of silk. We listen.

Our house has its noises, and we go about silencing them, unplugging the noisiest objects, repairing the creaking floorboard, oiling the hinge of the shutter. We return to the circle of our cousins.

We miss the world and its ways, the many shapes of clouds there are, the height of some buildings overlooking the harbors and the depth of some stairways down under the cities. We miss the world.

We are so few, so many fewer than we were. We cluster together, aware as we never used to be of how we can be torn apart.

We touch each of our cousins in turn. We have never used them as directed: our cousins are not that kind of object. We simply touch them while we may.

We cannot know if they consent or if they understand. Here is what we do: We ring our cousin the bell.

Our cousin’s voice sings out, sharp and sweet, hanging in the air.

While it lingers, we open our cousin the glass jar, who contains many ginger candies, many more than the number we are.

We take just enough and we taste them and the taste is a benediction.

We, the alive ones, we who are left, leave our cousins in the house.

We turn from them, from the fading sound of the bell, and we seek fresh grasses and mosses and ways. We travel out, our cloud sparse and light, to what we have not seen.

The ginger sweetness of the candies from our cousin the glass jar stays with us only for a little time, and then that fades too. 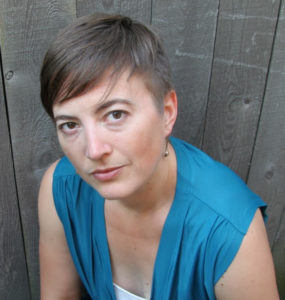 Claire Humphrey‘s first novel, Spells of Blood and Kin, was published by St Martin’s and won the 2017 Sunburst Award. Her short stories have appeared in many magazines, most recently Strange Horizons, Liminal, and Beneath Ceaseless Skies, as well as anthologies including the Lambda Award-nominated Beyond Binary (Lethe Press), the Kickstarter sensation Long Hidden (Crossed Genres), and Aurora Award nominee The Sum of Us (Laksa).