This is what it was like, in the beginning.

You come home from school one day, and a wall in your house is missing.

It might be the front wall, leaving your door suspended in space and the neighbors too able to see in. And seeing, comment. It might be in the kitchen, where dinner is late, and drafts wend their way around suspended cabinets to chill now tasteless lasagna.

Or it might be in your bedroom, where you now sleep with a light (too dim to hold back the night), where you keep your first edition comics (exposed to the weather) and the posters of things you used to love hang (tattered by sharp winds). Your home is colder than it should be. Broken. And monsters are no longer relegated to the darkness under the bed.

This is what it is like, in the middle.

Focusing on the missing wall is difficult. Memory brings it back to full glory but only in dreams. Waking reveals its true nature, which is absence. Torn plaster bristles with sprigs of horsehair (it is an old house, but nothing like this has happened to it before) and the wound grows more ragged as the days pass. So do you.

You cling to what remains.

Your plastic horse collection, the palomino missing one delicate hoof but still beloved. Your library, paperbacks pilfered one by one from the house shelves, as if they could shore up the empty space in your room. Sometimes it even works.

The missing wall is not discussed. You build a castle of blankets at the edge of your bed, between you and the hole where the wall used to be. You raise an army of animals to defend the tattered fortress while you sleep. Frost rimes their polyester fur, but they are true soldiers, strong and tireless at their watch. Afternoon tea parties are not enough to repay such loyalty, but they are all you have to offer.

You learn to navigate the drafty rooms, to cook and clean and care for, and you decide to rebuild.

The work is hard at first. You have never used plaster. The rusty metal trowel hangs heavy in your tiny hand. You start small, working from the bottom left corner so that rain will no longer soak the pressed cardboard backing of your dresser. The angles are wrong, the texture lumpy and the result is nothing like what you lost. You remember the red plastic scoop buried in a cardboard box in the basement, waiting to make snow blocks for a winter igloo. You find it, try to use it to shape something permanent, but the bulky rectangles are too thick to dry. The half-formed shapes melt into puddles of childish pink goo.

You collapse into a puddle of your own. Later, you do not remember the wracking sobs, but the aching pain and hollowed-out chest are harder to forget.

It is the bees who save you. You are curled in a hopeless arc when you notice the low drone of a bee at work. Then another, followed by a floating network of coordinated effort, all focused on one task: converting the shattered plaster into a nest. Their persistence motivates, their geometry inspires. Delve, partition, restore. You cock your head to one side and watch, and think, and then emulate.

From that point on the work gathers speed.

Some time later you are halfway through. Your dresser is no longer in danger of falling out, but the window still hangs in empty space. With a sudden inversion of perception, you realize that the missing wall is also a door. If you shift the piles of books aside, you can sneak out into the night to explore worlds both dangerous and seductive. You stop patching.

Perhaps you revel in this new-found freedom. You spend time in activities other than practical. That lasts long enough to build character, teach valuable life lessons, etc., etc., before you realize that walls are there for a reason. You reject less constructive pursuits and consult a guidance counselor about getaway plans. You rejoin the bees in their peculiar dance.

Eventually, the wall is complete.

This is what it will be, in the end.

One day you may stand outside your old address on a summer day, bathed in a corona of light. The field where you played hide and seek has sprouted a cluster of townhouses. The yellow brick of your childhood home still glows, although perhaps not as brightly as it once did. There is no sign of the missing wall.

You walk around the building, picking your way past a child’s bike (long tassels and a banana seat but not yours) and the remnants of a garden gone to seed. Carpenter bees still grace the air, tunneling into the old wooden balcony in the effort to build anew.

You might look up and wonder. You see no sign of it, the breach where your wall once was and is again. From the outside, the house appears intact. You gaze up at that second-floor window and, almost, see a face peering back.

Perhaps you spare a moment’s thought for the grueling hours you spent as a child, spackling over the yawning space with nothing more than hope and imagination. Or for what you may have walled up inside.

The new wall still stands. Not as solid, perhaps, as the original, not as sturdy in the face of wind and rain, but it is whole. The house sits, squat with memory, and you hope that you left it stout enough to shelter its new occupants. Your time there left scars, yes, but not ghosts. That old willow still drapes drowsy and cool above the murmuring creek in which you learned to swim. Red-berried bushes surround the porch where you flapped your wings. The tranquil air fills with the drone of bees as they build, tear down, and build again.

And then there is nothing left to do but turn and fly away. 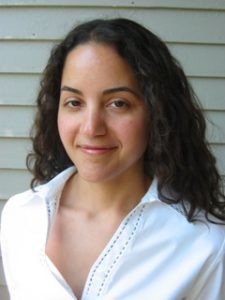 J.R. Johnson is a social scientist, writer, maker, archer, and unlicensed librarian. She grew up in the folded Appalachian hills where she learned to love Fall, blueberries straight from the bush, and the stream beneath the willows near her house. The fact that Fall is inevitably followed by Winter, that picking berries meant crossing paths with bears, and that the stream was laced with dioxins may also have had some impact on her outlook. Her work has appeared in Terraform, Nature, and other publications. For more on her latest projects visit jrjohnson.me.