Goddamn, it was hot.

Even in the shade, I was dripping with sweat, my mouth so dry it felt like I’d spent the last hour eating sand.

However, some clients are so big you don’t hesitate. They want a face-to-face, you give them a face-to-face. You don’t even think about asking them to stop by the office. You drop everything and head to them, even if that means hopping in a shuttle and schlepping halfway across the galaxy to some desert dustbowl of a planet with a number for a name.

“I’m not saying returns this year were unacceptable,” Mr. Park smiled, his eyes locked on the horizon, a laser rifle cradled in his arms, “merely, I expected better.”

“We appreciate that,” I replied, mopping my brow with an already sodden handkerchief. “Unfortunately the empire’s entered a stable period, and stable markets are a double-edged sword. Less volatility means less risk but also lower returns.”

Mr. Park wasn’t even sweating. Either his clothing was a nano-fibre composite with internalised temperature control, or he’d gotten himself some high-end implants. Probably both.

“Still, 9%? Government bonds would’ve given me that with no risk whatsoever.”

“Yes sir, but that would be boring, no?” Not a by-the-book response, I’ll admit; however, I was counting on my personal assessment of Mr. Park. The man had money to burn; did he really care about a few percent? I had him pegged as a gambler, and gamblers gambled for the thrill of it. The winnings were just a bonus.

When he laughed, I knew I’d called him right.

“You know, I remember the early days of the empire.” He grinned, fingers drumming on his rifle’s stock. “Back then, wars erupting left and right, the markets were a thing to behold. Peaks and troughs like you wouldn’t believe; fortunes made or broken overnight.”

I nodded. Nothing stimulates an economy like a war–or cripples it.

“That’s what we need. Another war,” Mr. Park continued. “Like with the Karaks! That was a good war.”

He waved the question away. “Insectoid species. Before your time; long gone. Good for the economy, though.”

I wondered how old Mr. Park actually was. He didn’t look a day over thirty-five, though for men with money that hadn’t meant anything in centuries. Could he genuinely have been around for the birth of the empire?

“Ah!” he yelped, the sudden outburst making me jump.

“Shh!” The laser rifle levelled with the horizon, Mr. Park’s eye glued to the scope. “Quarry.”

I peered at the desolate plain of sand. If there was anything in this hellhole, I wasn’t seeing it.

I was still scanning the horizon when the rifle pulsed, a needle-thin beam of light searing away from us. It vanished in an instant, the smell of scorched ozone creeping up my nostrils.

It took us almost twenty minutes to reach his “quarry,” and when the speeder finally touched down, I couldn’t even see the ridge we’d been standing on. The heat haze limited visibility, but we must have travelled at least a dozen kilometres.

However, I still found myself standing over the carcass of a medium-sized bipedal creature. There was a neat hole, a centimetre across, burrowed into its temple.

“Nice and tidy, see?” Mr. Park showed me, tilting the lifeform’s head. “The beam cauterises the wound, so you don’t get your hands dirty.”

“Yes, sir,” I nodded, wondering what kind of work had been done to the man’s eyes to allow him to make that kind of shot, let alone his musculature and nervous system. How much of him was even human anymore? “Very nice.”

Noticeably pleased with himself, Mr. Park reached into his pocket and withdrew a small remote. With a flick of his thumb, a drone detached from the speeder and swung over to hover above our heads.

Another flick, and the drone zipped around us. Sensors strobed, lenses snapped, and the moment was captured in every visible spectrum.

“I’ll send you a copy,” Mr Park said, guiding me back to the speeder once he’d reviewed the imagery and satisfied himself with the reproduction.

“Thank you, sir,” I replied, out of courtesy rather than genuine interest. “Aren’t you going to collect the kill?” The speeder had already begun to lift, and the creature’s body was still lying in the dirt.

“Whatever for? The meat’s vile, utterly inedible, and would you want it as a trophy piece? It’s not exactly impressive.”

I nodded, barely listening, watching instead as a number of creatures shimmied their way up out of the dirt around their fallen comrade. Tendril-like fingers extended from mottled bodies, and they stroked the corpse with sorrowful sweeps. As one turned to me, glimmering eyes locked on mine, I saw a silent accusation.

“Anyway, back to the markets,” Mr. Park continued, gunning the accelerator, the speeder powering us away. “Like I said, what we need is another war. Nothing boosts the economy like a good war.”

“Yes, sir,” I replied, my mind wandering uncomfortable paths, my gut already a few steps ahead.

I wondered how soon the image would “leak” (with ample assistance to ensure its reach), and which of mankind’s “allies” would be the first to see the parallels. The creature’s death itself meant little, but as a symbol, it spoke volumes. Humanity; we kill other sentient beings for fun!

It would likely be just the first of many little jabs, and inter-species diplomacy is tricky at the best of times. How much would it take, really, to go from “friend” to “threat?”

No doubt Mr. Park was betting “not that much.”

It occurred to me I should do the same. It wasn’t like I had much of a choice; I was standing right next to him in the same image that was poised to destabilise an empire.

The markets would move, because gamblers love to gamble, and there’s no greater thrill than betting it all. 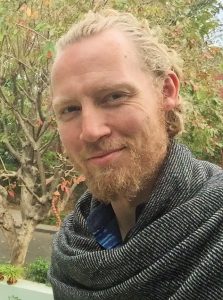 David Whitaker is originally from the UK, but having ambled around a bit, somehow found himself living in India. He has a degree in Journalism, however ultimately decided that as he prefers making things up, it should probably be a resource rather than a profession. His work has appeared in Sci Phi Journal, AntipodeanSF, and Review Americana. You can find him and all his other stories at his website, wordsbydavid.com