The deer, who is not really a deer, flees.

Her heart beats frantic against the prison of her ribs. White froth rises in her mouth to choke her. She dares not slow, though, nor stop to rest. Else the man who loves her will find her again, and there are worse things he can cause her to be than merely cervine.

The man, the hunter, follows her through these dark woods. She hears his footsteps all around her, but maybe that is just the gallop of her heartbeat, or the echo of her hooves against the frozen ground. Her magic is older than his, but his is the stronger, and spellcraft flutters away from her on the deer’s ragged breath. Perhaps he isn’t everywhere at once, not really. But of course he doesn’t need to be.

“My heart, my soul, my beauty.” His voice shatters the icy moonlight that slices between bare trees, and the deer nearly loses her footing. The world is too wide around her through the deer’s eyes, so large it crushes the air from her lungs. No, no, up again: there is no escape, no refusing to play the game. If she lies down at his feet and denies him the thrill of his chase, the stories they tell afterward will only say how much she wanted this. “I will hang your head in my hall, where men will sing your praises for centuries to come. You should be honored … “

The deer does not want centuries of praise. She wants only this lifetime, the blood that rushes in her ears, the familiar contours and spaces of the body that used to be hers. There is no time left to wish for what has been taken, though. Now there is only the hope of denying the hunter the object of his appetite. Her hooves find purchase on a scrabble of dirt and her legs recoil for a sudden change of direction: saltation and exaltation. An arrow pierces the air where she would have been and strikes, quivering, in an oak tree. She mourns the ghost-self that would have died there, and she mourns the lost resolution of this chase as well.

Somewhere, everywhere, the hunter is laughing. Not in mockery, but in surprised awe. He loves her as the thirsting man loves the water, he tells her. His reverence is no smaller for its distortion.

The copse of trees falls away around her and she sees white light sliding over silver pelts before she recognizes her new companions. A cluster of forest deer, all does. Their tails flick up stark white at the speed of her passage—

They do not look up again when she returns to join them while they graze. Her heart still hammers her ribcage but the little patch of winter grass is tender where it has slept beneath its blanket of snow. Another doe grazes her, flank to flank, and she meets golden-brown eyes. She musters what reserves of magic are left to her and listens to the shimmer of moonlight on snow, the warm swirl of misty breath. Yes. Perhaps.

She cannot take her own shape back. Not while he has anything to say about it. But she can, she thinks, press it upon another.

The arrow screams out a warning. Can you ever forgive me? she wants to ask the wide unblinking eyes of the doe. But she has no voice for the question, and the only answer to be had is the arrow’s bite. The other doe’s blood slashes the snow black. She stumbles to her knees as her herd panics and flees. Only the deer who is not really a deer stands and watches, and feels the earth tremble under his approach.

She makes the deer-shape cling to the other doe, several breaths past the moment when her rolling eyes still and her heaving sides quiet. She watches his face, drinks down that moment of doubt. His eyes shift upward—to her. The paean on his tongue thickens, threatening to curdle into something uglier.

Best not to linger. She changes the shape of the spell on the breath of an apology to the dead doe. Now she looks down into her own slack face. The hunter looks down too, and doubt and triumph war on the ancient canyons of his face.

His servants hurry forward to retrieve the cooling body. They disappear first into the night’s shadows, but he stops to look back. At the black stain upon the snow, or the doe who did not flee.

She stares him down until at last he turns to follow the rest. Only then does she turn and pick her way over the tracks the herd has left. Let him wonder. Let him doubt the shape his arrow brought down. Let him gnaw forever on the bones of his denial. She will find her way back to her own shape again, or she will live and die as a creature of the forest. But she will not die as his creature. It is a small prize, less than she deserves. More, too. But it is hers. His doubt: the only vessel of immortality she needs.

She never asked for centuries of praise. But she has survived. And in that small way, at least, she has done something worthy of praise.

Originally published in Gorgon Anthology, January 2019. Reprinted here by permission of the author. 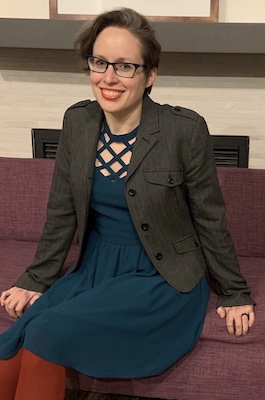