When we turn thirteen, we witch-children must sing at the Witches’ Sabbat.

It is how newly of-age witches are introduced to our ancestors, my grandmother said. Taking puffs of her pipe, she told me about her own Sabbat, in the same woods I would have mine. Her eyes sparkling, she spoke reverently how she sang under the stars with her familiar by her side and felt our ancestors’ hands on her back. She found connections out in those woods, she said, to us and everyone like us.

Many witch-children look forward to it. They spend their schooldays staring dreamy-eyed out the window, and rehearse the Sabbat song every night. They brew lavender-scented potions, cast flawless spells, and read the futures in tea leaves and tarot cards. When their Sabbat approaches, they pass out invitations to all of their classmates, heedless of the sneers. Those bright-eyed descendants are the pride of our shrinking community.

I was an awkward thing. My spell-work was clumsy, my potions sour, and my fortune-telling vague. My rabbit-familiar was small and skittish, nothing like my mother’s wolf or my grandmother’s vulture. More damningly, I had none of my grandmother’s pride.

When my grandmother swooped down on her broom to collect me from school, I’d crumple with shame. I hated even more when she took me out at the weekend, pleading with me until I wore my pointed hat and robes. She never noticed strangers laughing behind their hands as we walked by.

The worst was the incident in second grade. I forgot my lunch, and her vulture familiar brought it to school for me. Some children shrieked and ran at the sight of such an ugly creature; others laughed and pointed, indifferent to the teacher’s pleas for tolerance. Even after my teachers explained, I felt my classmates looking at me differently, remembering my strangeness.

My familiar didn’t come to school with me. It was too much trouble to explain that he was not a pet. He waited on my bed until I arrived home and collapsed beside him. Both of us exhausted from separation, he’d crawl into my blazer, his body seeking out the thump-thump-thump of our shared heart.

I could think of nothing worse than singing an old witches’ song in front of everyone I knew, yet my grandmother wanted to invite my classmates to the Sabbat. The Witches’ Sabbat was meant to be shared, she said. Heritage was something to be proud of.

My grandmother did not understand that the world of witchcraft she knew had vanished long ago. Nobody wanted potions or charms any more. Nobody needed the wise old woman in the woods. To most, witches were simply the warty-nosed villains of movies and television.

Yet, however reluctant I was, my grandmother was twice as persistent. She wrote invitations with parchment and quill, her familiar carrying them to my classmates’ parents. She rehearsed with me for hours, drawing my tiny voice from my throat. She stitched vulture feathers into my robes and ironed the brim of my pointed hat.

On the night of my Sabbat, I stood out in the woods, the grass damp between my bare toes. I watched my guests trickle in, shaking more with every new face.

There were my friends, giving me encouraging but awkward smiles. Sullen boys were dragged along by their mothers, grunting at me as they passed. One of the girls who always tittered at the boots my grandmother wore, sighed at her phone as her father embraced her. A shy girl from my French class gawked at everything. Far more guests than I expected.

I looked to my family. My mother smiled as she chattered amongst the guests. My father, rubbing his hands together, answered questions from the other parents. My grandmother, with her eyes closed, mouthed the words to our song.

My familiar clung to my chest, our heart racing between us. I rubbed my cheek against his velvet fur. Neither of us were looking forward to this. We were not the witch-children that made our grandmothers proud.

The midnight bell tolled. As I took my place in the centre of the Sabbat circle, it felt as though the entire world were staring at me: the bemused eyes of my classmates and their parents, the expectant gazes of my coven, and my grandmother, her chin raised and her smile encouraging.

It was time to sing. I opened my mouth and found my throat empty.

As the silence dragged on, some of my classmates muttered amongst themselves, irritated at being out in the cold for so little. One boy sniggered and was elbowed into silence by his father. I saw one of my friends, wide-eyed with her hands over her mouth. Other parents, forcing grins and fidgeting. Embarrassment clouded my vision, and my heart trembled in my hands, ready to shatter.

Just as I was certain my world would crumble, my grandmother’s lips began to move, and her voice rose from the crowd. The song rippled out from her, as others joined her.

My coven was not a choir. Their voices were a cacophony of mismatched sounds – wolf howls, owl hoots, cat meows, crow caws, even the occasional burp of my toad-throated cousin. Yet the song pressed its warmth all around me, steadying me like my grandmother’s hand on my shoulder.

I touched the vulture feathers my grandmother had sewn into my robes, plucked from her own heart.

I thought of us, hand against hand, paw against talon, a chain stretching back centuries. I felt those hands on my back, helping me stand tall.

My head tilted back, I let my rabbit-heart sing. 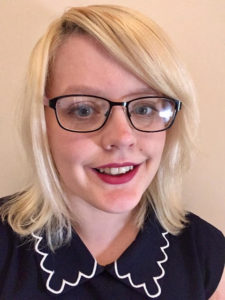 Charlotte Huggins grew up in the north of England, but now studies for their PhD in mental health in Aberdeen. Alongside academic work, they also write fiction. This usually involves a lot of coffee. Their flash fiction has previously been published with Tiny Owl Workshop, and is upcoming in Unnerving Magazine. They can be found on Twitter on @C_F_Huggins.