Garion spread his arms, his Xbox controller in the crook of one hand, freshly opened beer in the other. “Now? I’ve been logged in for three whole seconds. Can I just–”  But Lora’s blonde hair was pulled into a ponytail, and she had her gray sweatpants on. Gray sweatpants talks never let him _just_ anything.   He dropped the controller onto the over-plush couch cushion and slid his hand into his left pocket.

Garion set his beer on top of a bridal magazine on the coffee table and prodded the television remote.   The forty-six-inch screen went dark.   “Of course, baby. What is it?”

Lora’s brow furrowed. “Don’t call me baby. You know how I hate that.”

Beer on a bridal mag, prod remote, screen dark. “Of course, Lora. You know I’m always here for you.”

Lora’s eyes flicked from his face to the blank screen, then to four empty beer bottles on the floor beside the couch. Her lips curled in the way they always did when there was something she didn’t want to say. That reluctance could go either way for him.

Used to be? What they used to be was a couple that bickered and tossed around insults like they were tissues. But they’d turned a corner. The last real fight they’d had was over his Kickstarter failure – the Velcro wallet one three months ago, not the reversible underwear one, though she’d taken extra shifts after that one too so they could make rent. Three months wasn’t a streak he intended to break today. He thought a moment before answering her, a rarity for him.

“Was what we used to be so great?” He laid the game controller on the table. “I think even your mother’s finally starting to warm up to me. And weren’t we ring shopping last week?”

He didn’t pop this time. He felt like he should have, but he wasn’t sure how to make that one any better. “How I feel about you is real. It always–“

She winced and waved a palm as if she was cleaning a window she couldn’t stand to look at. “I found them, Gar. When I was doing laundry. You left them in your pants.” She held up a streamer of square plastic packets. For half a second Garion thought they were condoms, but he knew better. What she held was a strand of popped bubbles, their tiny doses of anti-time already expended. She knew he had been using Rewind.

“Those were the pants you wore ring shopping.” Her eyes flooded. “Was that whole day a lie?”

“Garion, Rewind is a lie! You and me fighting all the time, that was the truth. Not popping a Rewind every time I don’t like what you say.”

“Sometimes I do and say stupid things. More than sometimes. And those things hurt you. I don’t want to hurt you, Lora. Not ever.”

Her eyes narrowed, driving the tears to the corners and down her cheeks. “What to say? Why don’t you just try different things until one of them works? That’s what you do, isn’t it?”

“Until I can’t find anything that works.” Pop.

“It’s not like that.” Oh yeah, he already tried that one.Pop.

“Look, you deserve a guy that makes you happy. I want to be that guy. I wasn’t him, now I am. Maybe it’s not the best way, but I’m working on it. I love you, Lora.”

“You think ‘I love you’ is going to make all of this better?”

Garion probed deeper into his pocket, but all he found were expended packages. Why now! He couldn’t navigate this minefield on his own. No Rewind, no Lora; it was that simple. How many breakups had those little bubbles helped him dodge already?

“What’s the matter, Gar? Did you run out?” She shook the streamer, sending a taunting wave down the length of empty pouches.

His fingers itched for them. Too much time had already passed to fix anything he’d already said, but the next dumb comment was always poised just behind his teeth. So Garion did what desperate men do — he faked a cough.

It was a small cough at first, but it grew in melodrama as he scrambled off the couch and into the kitchen. She followed, hands on hips. He jerked open the refrigerator and pretended to reach for a bottled water. A rotten acting performance if there ever was one, but he could make most of it disappear with one squeeze of what was hiding inside the box of baking soda. Or, it should have been in the baking soda. His coughing stopped without opening the decoy bottle.

“Yeah, Garion, I found that one too.”

“What you need is to leave. We’re over.”

“Give me another chance. Let me change your mind.”

“How many times have you changed my mind already? But not this time.” She pulled the second strand of Rewind from the waistband of her sweatpants. Baking soda still clung to some of the plastic. Half the bubbles had been popped, but not by him. “It’s over, Garion. And this time, no take-backs.” 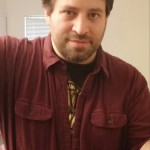 Scott W. Baker is a high school math teacher by day and a writer by night, which leaves very little time for fighting crime.  He enjoys long walks on the beach, zombies, and time with his daughter doing things that only a third grade girl would think to do with dad.   His previous stories can be found in places like Daily Science Fiction, Escape Pod, and Writers of the Future.  Scott himself can be found not fighting crime near Nashville, though showing up unannounced might come across a little creepy, so you’re probably better off finding him at scottwbaker.net