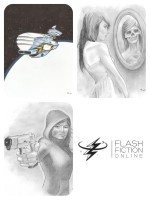 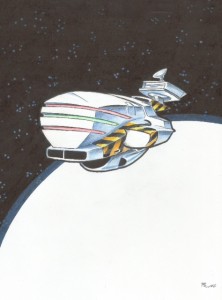 “Lieutenant, as long as I command this vessel, we will recognize everyone’s beliefs, is that clear?”

“That’s the idea! Get everyone together. One big, happy family.”

“Yes, sir. The point is, between the Christmas tree, manger display, incense, sun-tying stone, kites, drums, and gifts, we won’t have room for a reflecting pond.”

“The Cygnians, sir. They celebrate Ar’traacta, the Inner Listening. To do that, they have to reflect.”

“Excellent. They can reflect after the carols and chanting.”

“And cushions to reflect upon.”

“It all sounds delightfully snug and merry. Carry on!”

Engineer Moul was waiting dourly for her. “Well?”

“You need to build the pond.”

Moul slumped; he’d spent the entire shift rewelding furniture so it would fit. “Can it be a small pond?”

“You know,” Moul mused, “we don’t really need tables for the food. We can use shelves.”

“Won’t people bump into them?”

“They’ll bump into the tables.”

“Good. Because the Proxians require a pall of darkness for seven minutes, to symbolize the year’s birth.”

“As long as they don’t require an actual birth.”

“They do. But a Zalga egg doesn’t take much space.”

“How do we douse the lights?”

“That’s your department. Just don’t run the wiring through the pond, okay?”

The Holiday gathering came off much better than Yuwono expected. Moul had suspended the fabricated Christmas tree over the pond, mirroring the lights and other sacred items beautifully. Ganesha’s portrait beamed benevolently through the boughs. Bread and beer, fruit and wine crowded the shelves; the room brimmed with rich scents and costume-bedecked people.

Suddenly Irkshrat stepped forward holding a small cage. The Iridian’s gray skin gleamed in the candlelight as he knelt before the tree, reaching for the latch.

Yuwono dashed forward. “What are you doing?”

“Iridians honor all forms of life. Plants and animals must be represented also. I have chosen mice to fill this role.”

Juntasa turned from where he was arranging the choir. “Yes, Lieutenant?”

“Irkshrat needs to release some mice for the ceremony.”

“Won’t they get into the vents?”

“Where do you think I found them?” the Iridian muttered.

“Well, they can’t run loose. Other considerations aside, someone might step on them.”

Yuwono ventured, “Would it be acceptable if they worship at the feet of baby Jesus?”

Juntasa beamed. “Then release the mice into the manger! Moul, activate a force field to contain them. And remember, choir, in honor of the Pastafarians, we’re ending verse four with ‘R’amen’. Everyone together, on three!”

Marie DesJardin writes fantasy, alternative history, humor, and speculative fiction; every now and again she publishes a story between day jobs. Credits include Analog Science Fiction and Fact, Flash Me, Michael Moorcock’s New Worlds Magazine, Reader’s Digest, and Story Quest Magazine (2012 contest winner). She has published one science fiction novel, For the Time Being, and has another looking for a home. In her day job, Marie develops custom documentation and eLearning for a video surveillance company, which means she never has to ask what anyone else is doing, because she already knows. Marie adores all animals, even pointy or squishy ones, and enjoys hiking in the mountains when they are not on fire. Marie lives in Westminster, Colorado. Her website is www.mariedesjardin.com.