Royce Is Not My Father Audra Kerr Brown

We needed groceries, so we pawned my sister’s leg. Not her leg, but the prosthetic with a steel pylon tibia and detachable foam foot that once belonged to her father, Royce. Royce is also the name of the leg. The leg now hangs above compression socks, enema bulbs, and breast pumps in the medical supply aisle at Kotov’s Pawn.

Pawning the prosthetic was Mom’s idea. She held Jersey’s bucking torso while I pried the leg from her panicked grip. We then spent two days licking our wounds in the empty tool shed while Jersey ripped through the house like a mongoose on speed: smashing windows, punching mirrors, drilling holes in the drywall with a curtain rod. Later she refused to look at us, pulling a curtain of black hair across her face with bruised and bloodied hands.

After buying groceries, Mom handed us the leftover money we made from Royce. Not Royce the father, but Royce the prosthetic leg. The leg was all Jersey had left of her father; she didn’t want to, but she took the money. I’m saving my money for bus fare to an amusement park called Sunshine Palisades. Jersey says Sunshine Palisades sounds like a place where children are turned into donkeys and forced to work in meatpacking plants.

Carameled meatballs and geriatric cage fights are just some of the attractions touted in the Sunshine Palisades tri-fold. I keep the tri-fold between a picture of Moses and a list of Ten Commandments in the back of Mom’s Bible. The Bible’s cover is furred with fungus, its pages falling out like feathers as if it were a living, breathing thing. Mom’s read the thing twice and has placed it in the bathroom with high hopes that Jersey and I will start reading it. I refuse to read it even though “Honor thy father and thy mother” is one of the commandments. There should be a commandment that says, “Thou shall not abandon thy wife and child.”

I’m not a child anymore; I’m fourteen. Fourteen is old enough to know that you can’t save money for Sunshine Palisades when you’re spending every red penny in the foyer of Kotov’s. Kotov’s foyer is a gauntlet of temptation: swirling lights, smoky two-way mirrors, coin-operated games. The games are rigged so that you can never grab a $100 bill in Tycoon Typhoon or pull out a stuffed mongoose with the Claw of Chance. And chances are the chocolates in the plastic eggs will turn to dust when their shells are cracked open.

I open the Bible, pull out the Sunshine Palisades tri-fold, and stare at the pictures. I picture myself in the front car of the roller coaster, arms up, eyes wide with joy. Mom’s green eye peers through the bathroom door, through the hole where the brass knobs had been before they were pawned, her cheek pinched in a smile. She smiles because she thinks I’m reading the Bible. I’m not reading the Bible; I’m thinking that I’ll never make it to Sunshine Palisades, the place that may or may not turn children into donkeys, and I’m also thinking about Royce. Royce the father and Royce the prosthetic leg. The Royces.

Royce the prosthetic leg used to lie in bed between Jersey and me like a third person, the heel resting upon the pillow as a bald head. Jersey would turn her head in her sleep to suck on Royce’s foam toes. Now, without Royce to separate us, if our toes touch at night, Jersey heaves a hissing sort of sigh before pushing my foot away.

We were pushed away by our fathers. Jersey’s father, Royce, snapped off the television when she was three, hobbled out the door on his one good leg, and never came back. I always thought Royce the father would come back for Royce the prosthetic leg, and for Jersey. But Jersey says she doesn’t care anymore about the Royces. Not Royce the leg, not Royce the father.

My father, who is not Royce, is someone I know nearly nothing about. Nothing but two shreds of information—he had copper red eyes and he may or may not have worked at Kotov’s Pawn—not nearly enough detail to stitch together a picture of the truth.

Truth is, I play the coin-operated games in Kotov’s foyer to catch the copper red eyes of a man who may or may not be standing behind the smoky two-way mirrors, and who may or may not actually be my father. My father might not even work at Kotov’s Pawn. He might work as a supervisor in a meatpacking plant, in a place that’s just a bus ride away, in a town called Sunshine Palisades, a town with an amusement park name.

I don’t know my father’s name. For all I know his name could be Moses. But names don’t matter, Mom says. Fathers don’t matter. What matters is that we have food to eat and a mattress to sleep.

Jersey sleeps beside me, her lips pushing in and out like a suckling child. I’m not a child; I’m fourteen. Fourteen is old enough to know that your sister’s prosthetic leg cannot be your father. Fathers are not made of steel and foam, but are living breathing things made of flesh, bone, and hair. Jersey’s black hair covers her face like a closed curtain. The curtains were among the first things we sold to Kotov’s Pawn. Kotov’s will buy nearly anything, even breast pumps and enema bulbs and antique Bibles with loose, yellow pages, but they can’t buy memories. Memories are stories which cannot be taken, stories you can tell yourself over and over again just as easily as flipping through a tri-fold’s glossy photos. I have no photos of my father, no memories, no stories, no name, just eyes like red coins staring back at me in the smoky two-way mirror—two copper pennies—worth next to nothing. 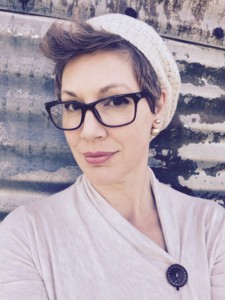 Audra Kerr Brown lives betwixt the corn and soybean fields of southeast Iowa with her husband, two children, and two cats. Her fiction can be found at F(r)iction Online, Cheap Pop, People Holding, Fiction Southeast, and (b)OINK, among others.