For 247 sleep cycles, the safebuoy has been drifting. The only window is a round, pillow-shaped patch of transparent steel. Loocha tells her son, Corvey, there’s nothing to see, and he believes her. Until the giant ice cream cone appears.

From his sleep-sack, Corvey points and asks, “What’s that?”

Since the evacuation of the Oort Colony, this has been their game. He sees something through the glazed window, and Loocha must come up with outlandish answers for whatever happens to be scrolling by outside.

Lately, he has been playing the game without emerging from his bed, a bungeed cocoon of blankets and mats. His voice has grown high and reedy. The medications have increased. The nursing grub no longer provides morning blood counts.

Corvey is pointing at a triangular gleam obscuring the stars. A wide, jagged semicircle fans off one end. Hard edges, nothing natural. A geometric sprouting.

In an instant, Loocha recognizes the object. It’s another safebuoy.

Corvey’s hazy expression reminds Loocha that, for him, ice cream is squeezed from an aluminum bag and gobbled mid-drift. So she explains, again, about the un-seeable force that pulls all things together. Light and stars, planets and moons, asteroids and colonies, ice cream dollops and conical pastries.

He lowers his arm and, looking sideways, smiles. This is what Loocha calls, fondly, his cheeky look. He knows she’s hiding something. He notices the blue flash on the console.

“There’s nothing to see,” she says.

Her signal to let it drop, and he does. Loocha has spent months teaching him that it doesn’t matter what’s outside the window. When she tells him, don’t think about it, he doesn’t. When she says, don’t worry, he talks about something else. Like now.

“Can we play Bullconomy?” he asks.

She has to dig around to find the scrollgame. As she yanks a swing-table loose and smooths the magnetic scrollgame against it, her lower back aches. Gathering decrepitude despite thrice-daily microgravity yoga sessions.

A holographic landscape of colored buildings and busy streets emerges from the scrollgame. They play for three hours. Corvey wins only because Loocha fudges her chances. She cannot stomach handing him a loss. He needs as many wins as she can provide him.

After the game, she coaxes Corvey out for exercise. Pulling himself from one handrail to the next, he manages one circumferential “lap” of the safebuoy’s only living quarters. Cramped and thick with the hum and throb of machinery and the damp stink of their unwashed bodies. The vessel is ninety percent life support mechanics and armor. Its structure is honeycombed with pockets of sand and ice. Shields against radiation.

After his lap, Corvey eats a locust cracker and swaddles himself back into the sleep-sack, complaining in his attenuated, old man’s voice of pain in his limbs, his stomach, his lower back. The back pain is new.

When the complaints become sobs, she uses her curled pinky to nudge the globular tears toward the nearest hazard-vac opening. She then cracks a hot pad to life and traces letters between his shoulder blades, which lately seem more jagged. The absence of crying tells Loocha he’s finally asleep.

This is safe time. When Corvey sleeps, nothing can happen. Another lie, though this one is to herself. Loocha must believe her own lies, at least a little, if she’s to pass them on to her son.

A lot can happen when Corvey sleeps. His cells never sleep. The good ones and the bad. But she needs the chance to rest and not think. Not thinking is almost as good as sleep.

Not thinking about the evacuation. The preposterous luck of reaching a safebuoy. The preposterous misfortune of ionizing radiation, cascading electromagnetic fields and fifty other imperceptible casual factors that lined up against her son in a microburst. Not his fault, not hers, yet the bad cells began to blossom. The grub caught it quickly. There have been complications.

Too soon, a soft whir emanates from the floor. The grub emerges from its shaft and wriggles up a track leading to Corvey’s sleep-sack.

The grub’s metal-mesh body sprouts needles of varying gauges—for drawing away sickened blood, for injecting delicate poisons, for thrashing healthy cells to life. As the grub draws nearer to Corvey, these needles bristle.

With a flex of her fingertips, she pushes away and buckles herself into a cot. The crooked shadows of infusion pumps and intravenous branches reach across the ceiling like shattered limbs. Cylindrical lights wink green or red, sometimes both. Every other second, the lights and shadows are washed away by the persistent pulse of blue.

The giant ice cream cone is trying to talk to them. Two adults, three children, according to the schematic flashing on the holopad.

Already, their safebuoys are drifting apart. Loocha should respond. She should activate the tether cables so they can anchor onto each other.

But Corvey is weakening. If Loocha hails them, what germs might strangers bring? Either way, the situation will change. Maybe better, maybe worse. But she can’t bear the risk. Her life’s landscape must remain stable. Stable means not worse.

There isn’t much more worse for their situation to get before it sinks into the unthinkable.

She studies her sleeping son. The swell of his chest so slight under the hot pad and blankets. She thinks positive thoughts. She visualizes him leaping free with the power of his own laughter and waking everyone far too early.

The grub’s pokes have woken him. His voice, so sudden and clear, alarms Loocha.

“What’s happening to me, Mummy?”

She unbuckles and struggles to his side. “It’s a giant ice cream cone,” she soothes. Though that’s not what he’s asking.

Together, they look through the patch of transparent steel. The cone has diminished to a sliver. The pulsing blue light begins to fade.

“There’s nothing to see.” 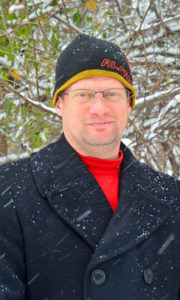 Wes Smiderle has learned to fear ringing phones. He hates hospitals, but loves the people who work and volunteer in them. He knows good luck can be sifted from bad. He abhors waiting.

Smiderle is a writer. Some of his stories have been published in magazines, including On Spec and SubTerrain.

He’s a member of SF Canada, but has written in a variety of genres. His short story “Maisie’s Safehouse” was nominated for the Arthur Ellis Award for Excellence in Canadian Crime Writing, while his story “Alouette” was nominated for an Aurora Award, Canada’s award for national science fiction and fantasy literature.

His short story “Shriek Season,” published in the 2015 Spring edition of On Spec, is set in a world where families resort to living in hovering ‘mag-rez’ houses to avoid catastrophic weather. Tangent Online called it “a fascinating read.”

Smiderle is a former reporter and editor and has written for daily and weekly newspapers. His three-part feature on youth mental health earned an Ontario Community Newspaper Award.

He is currently working on a novelization of “Shriek Season.”

He lives and writes in Ottawa, Ontario with his wife, Amanda, and their three children, Gwendolyn, Samuel and Griffin.

“Safebuoys” is Smiderle’s first published work of flash fiction. An early draft was written in a hospital room in the middle of the night during a lengthy stay while Sam was receiving treatment for cancer.
Sam is back home, back in school and wants to be a nurse when he grows up.