Salt, spices, fat, honey. My favorite moments are when he licks his lips and asks for more. A third roast chicken, a ninth roast potato, another crumbling slab of baklava. I leap up, float to the kitchen, bring more and more and more. Grease coats my fingers as I bring a morsel to his mouth. He smiles as his lips close around my fingers.

After the meal, I bathe him while we talk. His chins are shiny with fat, and baklava crumbs litter his chest, threatening to slip into the smooth folds of his stomach. I wipe him gently with warm water, turn him, oil him, powder him. I tell him about my day, glossing over the boredom of my job at the grocery store, but detailing every step I took in preparing dinner. He hums appreciatively and tells me what he’s seen on the news today, delivers his analysis, thoughtful and moderate. And then we plan tomorrow’s dinner.

He asks me to help him roll over for bedtime and I do. He is sleek and rounded like a walrus. I help him use the bedpan and curl up next to him to read before sleep. I have a new recipe book I’m teasing him with: reading it in bed with him, but literally behind his back.

I wake in the pre-dawn dark to make his breakfast, clean him, roll him onto his back. I leave for work with a head brimming with recipes, plans, a shopping list. Spices, salt, fat, honey. But when I get home, arms laden with groceries, his bed is empty. Panic lances through me before reason reasserts itself: He can’t have gone far. He hasn’t been able to walk in years.

I call his name softly. There’s an answering groan from the bedroom. I hurry over and find him on the floor beside the bed. Awake, he can’t roll himself over, but a nightmare flipped his whole vast self out of bed. I can’t get him back in. His breath is labored, his lovely round face creased with pain. His arm and ribs cracked under his weight when he landed. There’s not even room to roll him onto his back on the floor. I clench my fists in frustration and dial 911.

At the hospital, they move him with slings and machines. The nurses don’t care for him properly. They don’t oil him or powder him, they would let him sit in his bedpan all day. Worst of all, the food is scant and terrible. He doesn’t complain, but I know he’s suffering.

I return home, cook him a proper meal, bring it in. I slip sweetbreads in cream sauce past his lips. He gives me that special, sly smile that’s just for me, and asks if I happen to have brought any more. I am delighted to say that I have.

The next day, I’m met at the door to his room by an earnest woman named Shelley, spelled Chellee. She spells it for me carefully, as though it matters. Shelley is his social worker. She grasps my arm and insists on talking to me, and no, it can’t wait until after dinner.

Shelley steers me to an antiseptic alcove and talks at me while I contemplate the bags of dinner cooling at my feet. She monologues about obesity, codependence, enabling, mortality. Finally, she asks if we have an agreement. I tell her we do not and head back to his room to feed him, clean him, oil him, turn him.

He’s unusually quiet tonight. He turns down thirds, and I feel him watching me as I pack the leftovers up. As I bathe him, he tells me his doctors want him to lose weight. To stay in the hospital for a crash diet. To lose enough weight for surgery, not to heal him but to trim his stomach so he will lose more, more, more. He wants to walk again. He doesn’t want to die.

Of course he won’t die. Apart from the cracked ribs and arm, he’s the healthiest person I know. I soothe my hands over his smooth flesh and tell him he’s beautiful just as he is. I aim his penis into the bedpan and he sighs.

The diet is awful. He’s only allowed to eat what they bring. I spoon grey meat into him, pallid vegetables, meager mouthfuls of rice. Tasteless low-fat fiber biscuits pass for dessert. I can’t help how my lip curls as I wipe the dry crumbs from his chest. His face is grey and drawn with hunger. He tries to tell me about the news, trails off in the middle of a sentence. For the first time, there is silence between us.

I ask Shelley if the food could at least be good. I offer to cook to their specifications. She folds her face into a sympathetic smile as she refuses.

Salt, sugar, fat, spice. I smuggle in garlic powder, smoked salt, truffle oil, honey to doctor the food. It’s like gilding cardboard. He rewards me with the ghost of a smile. I wash him, oil him, turn him, powder him. His once-firm rolls are sagging under my hands. Emptying like an old balloon.

The next night, I wait until the nurses and Shelley are gone before bringing out a tiny golden treasure: a little ball of spun sugar, dusted with chile powder. It’s mostly air, after all. It can hardly hurt.

The fine threads of sugar melt onto his lips like a kiss. He closes his eyes and hums. When he opens them, his gaze is smoky as ancho chiles. He licks the sugar from his lips and asks for more.

Salt, spices, fat, honey. He is mine, mine, mine. We smile sly, secret smiles at each other as we eat. 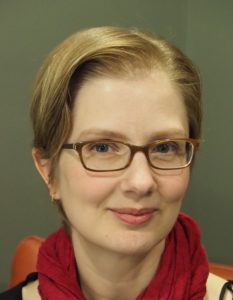 N. R. M. Roshak was a winner of the 34th Writers of the Future contest. The author lives in Ottawa, Ontario, Canada with a small family and a revolving menagerie of Things In Jars. Their fiction has also appeared in On Spec, Daily Science Fiction, and Devolution Z, and can be found via http://nrmroshak.com.