To Fly A Pig in the Dorseny Sky

When Althea opened the sorcerer’s book, a pressed leaf like a tiny green star fell out into her lap. Inside the book, words hand-written in long, loopy scrawl undulated like waves, the ink blue as the deep sea where Althea had seen a boy thrown overboard in sacrifice to the Little God of the finned fishes, when she had sailed to come live in the tutors’ academy. He had been two months younger than she.

She turned the page. In the same blue ink, a sketch of that boy, his wide, frightened eyes and his right hand clutching a blanket of felt that his mother had given him.

So he would not be cold while he Slept.

He had been her friend. She had asked him about the mountains where he grew up, and he had told her stories of white dogs and blue-furred elephants and tea so hot and sweet it unfroze your stiff fingers no matter how long you had been out. Standing on the deck with the priests, everyone staring at the spot in the sea where no sign of a boy remained, she had wished to the Little God of friendship that she could have a cup of tea to pour into the blue depths to warm him, and one had appeared like a sudden storm in her hands, in a cup of pale china as thin as a curving edge of shell.

Later, missing him, she had begun to pray that he would be alive again, and sitting once more in a coil of line on the bright, wide deck, with the wind making haystacks of his hair; but the tutors stopped her, saying if she did that then the ship would surely be sunk, and the finned fishes feast on everyone aboard.

The sorcerer’s book lay heavy in her hands. Carefully, gingerly, she picked up the little leaf to put it back where she had found it. But as careful as she was, one of the delicate tips broke off anyway.

Althea lived in the City of Wind-Angels. A hundred thousand glass bells hung from the eaves of the Palace. She saw these on the page, inked in silver, only instead of the angels being invisible, there they were. They looked like long, sinuous snakes, or like birds with Little God faces, or like shrieking women, their eyes all bulging out in some emotion that Althea couldn’t recognize. Beneath the picture of the wind-angels, tiny rows of letters descended like rain, but they were in some foreign alphabet, and she could not read them.

Soon she learned a trick. Whatever she almost-but-not-quite thought about, the sorcerer’s book found it in ink and brought it to her. The shallow bowl of copper that the academy beggar-man held out to her as she followed the back of her tutor through the bright-shining streets of the City of Wind-Angels; an acorn so glossy her face reflected in it; the tree struck by lightning that stood at the top of the hill where her parents had died.

Althea heard a voice call her name. It took her a few moments to realize it was not calling her from inside the book. It was her tutor’s voice, from the direction of the kitchen, calling, “Dinner, Althea! Dinner!”

She tried to pick up the broken corner of the leaf, but it only broke in two again, and then to dust, so she swept it off the table into her palm and sprinkled it, salt-like, onto the pages.

Then she took a last, long look at the drawing of her friend from the ship, the sacrifice boy. She tried to picture him drinking tea underwater, but how could he drink tea if the Little God of the finned fishes had devoured him? How could he wrap his blanket around his shoulders? The thought worried her, made her draw up her lip for her teeth to chew.

She did not understand, so she asked the book to show her.

When it was done Althea closed the book with only a slight tremor of her hands. She set it very carefully on the table, so the tutors would know she was a good, responsible girl.

Then she prayed very hard to the Little God of all places like her tutor had taught her, and held out her palms like she was scooping up sea water, and the room shimmered all around and the salt air came and whipped her hair into strands, and there was no longer any voice calling her to dinner, only the sound of the sea like giant breaths. And she stood on the rocks looking into the dark water for a long, long time, thinking about death, and what it did to you.

Then she prayed to the Little God of the finned fishes to forgive her for what she was about to do.

The boy from the mountains fell on his face on a barnacle-covered rock, and Althea had to scramble down to the water’s edge to save him from the next incoming wave. She took his head in her hands and she looked into his frightened eyes. She could see that he remembered everything.

Then the finned fishes came. As they flopped up onto the sea-stained rocks they grew legs, and they were great and many and terrible. Althea made a sign like holding her hands over a warm fire. She had not tasted the sweet tea she had poured into the sea, but she imagined that she tasted it, and how warm she would feel, and this time as she prayed she grasped the boy’s elbow in her hand like she was leading him off the gang-plank herself.

It would take a long time for the finned fishes to reach the mountain. If they cared that much about one sacrificed boy. If they wanted him that much. If they had memories that long. 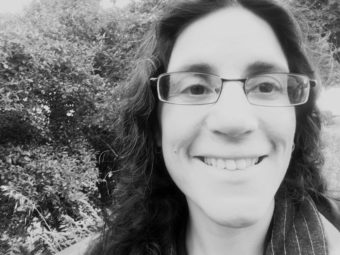 Jennifer Linnaea‘s work has appeared in Strange Horizons, Daily Science Fiction, and Lady Churchill’s Rosebud Wristlet. She lives in Eugene, Oregon, with her partner and cats, and when not writing studies kanji and practices Aikido.