Señor Garcia, the viejo on the third floor, was fussing about how he had never done laundry before and didn’t know what to do. He didn’t even greet me with, “Qué buen día, mijo” as I tugged my laundry sack into the empty laundry room. I told him I just needed one second to put Papa’s and my clothes in, and then I’d help him.

I wrestled my school uniform shirt off and started my piles for whites and colors, just like the viejas who were usually there taught me when Papa started to forget about the laundry. When I told him to give me just a few more seconds, he mumbled something.

I tilted my head, questioning whether he really did curse at me under his breath. But I shook that thought away. Señor Garcia was a squeaky clean viejo with a squeaky clean mouth.

I paused my sorting when I caught a sour stench like bad queso fresco. I didn’t make it obvious when the viejo turned to face me, but I almost scrunched my nose. Instead, I smiled politely at him and then at his soiled undershirt. Yeah, my clothes could wait.

“¿Y qué?” he asked, throwing his hands up, his eyebrows spiking like snowy mountain peaks. How was he supposed to use it?

I showed him where to insert quarters into the washer. He didn’t have any. But I had extras from recycling all of the brown-bagged bottles around the apartment that Papa had forgotten about. “Some people,” I explained, “put their clothes in and then turn on the water, but I like turning on the water first so the soap mixes in.” I told him it was a personal preference and he could do whatever he wanted, but for that demonstration, I was going to turn on the water first. And then I unzipped my lunch bag of detergent and dumped half in because he didn’t have any of that, too.

I asked if he was paying attention and if it made sense because I could go slower. He grumbled and said “Hmph,” so I shrugged and continued.

I lifted his hamper to throw everything in so I didn’t have to touch the viejo’s clothes. I aimed for the opening on the washer. The hamper was heavier than expected, and I missed a little, dumping some on the ground. I apologized, picking up the scattered clothes.

At first, I didn’t understand why the vijeo started to cry—not a bawling cry, but a quiet one, like holding down a sneeze. Then I saw him reach for the pink cooking apron Señora Garcia had worn, and I wondered where she was because we’d always cross paths in the laundry room. She’d offer me a few of the paletas de cajeta stuffed in her apron. Those dulces tasted like dusty air with a sprinkle of stale sugar. They weren’t good candies, but I always thanked her and shoved them into my pocket.

I was going to ask about her. But then he sniffled. And he sniffled again. I stood there waiting, listening as the water flooded down, filling the washer, and as Señor Garcia held the apron, softly crying and clinging onto the last traces of warmth in his heart. That was enough to tell me she was no longer there.

When the washer was ready, I cleared my throat and said this was it because after we closed the lid, the cycle would start and we couldn’t stop it. I asked if he wanted to put the apron in.

He exhaled, “No,” and I told him he could always wash it another time.

As I loaded my clothes into the neighboring washer, I checked each pocket, hoping I’d find a paleta from when I last saw Señora Garcia, but as I placed the last item in, I realized I didn’t even remember when I last saw her. Weeks, or maybe a month, had passed since then. It probably had been that long since Señor Garcia had fresh laundry, too. I felt my own heart lose warmth at the thought of him alone in his apartment, the passing days piling stains onto his clothes until he finally said, “No más” and had to figure out laundry for the first time in his life.

As the washers did their job, I scooted my chair close to him and talked about some of my favorite things, like doing dishes, shopping for groceries at the marketa, and getting the best meat for cocido at Francisco’s Carniceria. They weren’t really my favorites, but maybe there were other things besides laundry he didn’t know about. He didn’t talk, but I didn’t expect him to because listening was all he needed.

I explained how to use the dryer, and when his clothes finished tumbling inside, I unloaded each item, showing him how to fold them. I got one of his button-ups, a white guayabera shirt, and threw it on his lap. It landed on the apron in his hands. I told him to put it on because there was no experience like wearing a fresh-out-of-the-dryer shirt. He was reluctant to put it on, but I started to help him into it and eventually, he swatted me away, saying, “¡Ya! ¡Ya!”—He’d do it himself. He buttoned the shirt, stood up, flattening it against his body, and acknowledged it felt soft and warm. As Señor Garcia ran his hands over the shirt, feeling its heat, there was a moment when he held himself, when he held dearly onto the warmth, and I knew that, for at least a second or two, his heart was a little less cold than when I came in. And that made mine a little less cold, too. 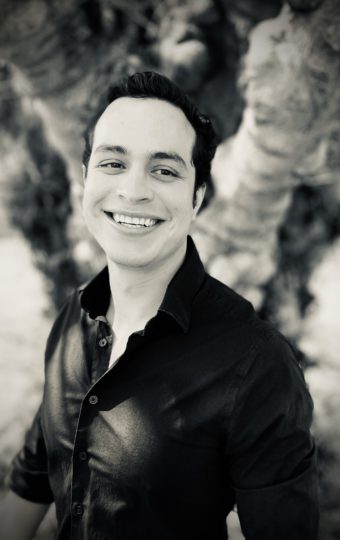 David Urbina is a writer and software developer from the San Gabriel Valley in Los Angeles County. He attended Mt. San Antonio College and graduated from the University of California, Berkeley with a B.A. in English with a minor in Creative Writing. You can find him on Instagram at @windupdurb.