Love Letters on the Nightmare Sea

When the Heart Murmurs

A sister’s heart is a cube, quartz clear, the size of a fist, suspended in the hollow interior of her porcelain chest.

When Sister Margo’s heart began to beat again, she was immediately afraid that the other sisters would hear it and somehow stop it.

It was the baker’s boy’s fault that it began to beat again. He’d laid his hand on the soft leather that upholstered her fingers and looked into the empty spaces where her eyes would have been.

“The flour is very fine quality this week,” he’d murmured, and there inside her chest the crystalline cube began to shudder.

“Thank you,” she’d said, the strings in her slender throat pulled taut, the bow at the back of her mouth caressing them. She had withdrawn her hand from the counter too slowly, and the boy had to know, must have known what he’d done to her.

Sister Margo, when she returned to the convent, left the bread for the novices in the kitchen and excused herself, and in the privacy of her cell packed cotton batting around her heart to deaden the sound of it. She was sixteen, something like sixteen, though she’d lost her birthday long ago. She knew that it was summer when she was born, remembered some early day with her mother, hot and sticky, sweet with pink flowers that grew in tufts on river trees. She’d had a birthday present, long forgotten, but its delicate wrapping lived in her still, framed by the branches and trees and warm peach haze.

It was summer now, too, so perhaps she was seventeen, and in the cool vaults far below her lay the bodies of her sisters, and her body among them, where it had lain since she surrendered it three years ago. There it would remain, unchanged, young and pale in the darkness, empty as a seashell abandoned by the tides.

She wondered, did its heart beat now as well, in sympathy with her sister’s heart? Would it echo through the vault, would it raise an alarm, would her sisters discover her, pluck this heart from her chest and replace it?

The bells tolled, and under cover of their sound she found her way to prayer and lifted her thin voice in song. The novices behind their veils with their still human voices, the mournful strings of her sisters, the clanging of the Mother Superior, all the sisters’ voices lifted up, and she knew, she remembered, how they sounded in the town, like the voices of strangers, otherworldly, inhuman. Within her chest, the heart beat still, and she felt it reverberate within her like the beating of wings.

Sister Margo could not devise a reason to give up her duty buying provisions for the novices who still ate. Could not, did not want to. Once a week she went, once a week the boy, who was the age of her body deep below, looked into her empty eyes, laid a hand upon hers, intimated some mundane secret: the currants were too dry this week, the rye was the freshest baked.

At night when the other sisters slept Sister Margo would throw open the shutters and let in the moonlight, open her chest and unpack her heart and check it all over for the cracks she was sure must form. In its regular beat she now heard, unmistakably, the call and response, Phil-lip, Phil-lip, like the cry of a night bird.

Her sisters knew only that Sister Margo sang more loudly than she once had, that the sound resonated differently behind the featureless porcelain of her face.

Sister Margo had not set foot inside the vault since the day her sisters had parted her from her first body. Stepping into the endless cool, dry night of the vault, she was greeted by the rows of her sisters, their faces and fingers and hearts long cut adrift from their souls. Would she recognize herself, she wondered, the body she’d abandoned? All of the faces looked the same, young women forever in the fullness of youth, lips parted in repose, hands clasped dutifully in prayer.

The leather of her feet shushed the darkness, the beating in her chest kept time, the flame of the rushlight in her hand caressed each face, each body until she saw her own prone self illuminated. Yes, she thought, as she studied the hands, the scar on the pad of her left index finger where she’d cut her embroidery thread too recklessly, the comforting roundness of her stomach, the soft slope of her shoulders. Why had she forsaken herself? Somewhere in the quartz clarity of her heart the tight feeling of tears began to form, though her empty sockets couldn’t weep.

She thought of the novices upstairs, thought of them crying and eating and singing off-key. She tried to remember the taste of bread, the sharp feeling of a wound, the dull ache of cramps. She had given them up, and willingly, how long ago? Suddenly she felt around her the pressure of unlived days, the time lost, in her body and the bodies of her sisters. She could live seventy identical years here, and all she would know is that the baker’s boy had lived and died, that the novices had become sisters, that new novices had come, that in the outside world the currants were sometimes dry, the rye was sometimes fresh.

Their bodies were horrifying, their bodies were timeless, were wretched, were blessed and macabre. She opened her chest and took out the cube that was a sister’s heart, set it on the stone slab beside her human self, raised her inhuman fists and shattered it.

The rushlight burned, burned, went out.

“Which bread is the freshest today?” The girl Margo asked the boy Phillip and laid her hand on his on the counter.

Their eyes met, and Phillip recognized the emptiness there, and smiled, and never told a soul. 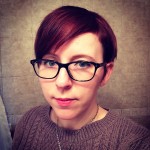 Raven Jakubowski lives in New York City with her spouse and her large, ill-tempered, orange cat. Her work has appeared or is forthcoming in Daily Science Fiction, Freeze Frame Fiction, and Star*Line. She supports her writing habit by working as a tailor and dresser for stage and screen, and she spends her spare time knitting, tatting, sewing, and reading about history, science, and the history of science. Raven is occasionally found on Twitter and other social media (@Quoth_a_Raven).