The Solid Years of My Life Holly Collingwood

Thankfully, the cilia in my nose are frozen solid so I can’t smell myself.

Like drips collecting at the tip of an icicle, my thoughts form at a glacial crawl.

The odor of a body emitting freonic chemicals is rank. The first experiment lasted three days and my stench was lab-clearing, canary-killing noxious. It maxed out the ventilation system.

This experiment is one hundred times longer. The team replaced my blood with freonic compounds at an atomic level when I was cryogenically preserved three hundred days ago.

In layman’s terms, I’m a popsicle. Frozen solid and locked inside a self-contained cucumber-shaped pod with a porthole the size of a cantaloupe. Because galactic travel is too far for raw astronauts, the objective is to launch iced humans into the abyss and defrost them on arrival.

An ice cream headache hammers my brain while I thaw. Diagrams on the monitor light up as my blood replaces the chemicals and each organ nears its functional temperature. Heart, lungs and circulatory system follow the nervous system. The hissing blood warmer near my left ear buzzes like a honey bee. For the next test, I’ll relocate it closer to my feet.

As soon as my legs are able, I kick three times on the pod wall. My lab team knows this means, “start the coffee.” I’m impatient to know who won the Iditarod, the Stanley Cup and if my curling team made the playoffs. Ice is my thing.

The porthole is covered with thick frost. Same problem occurred during the initial test. Defroster malfunction. The tech team wasn’t confident about their alterations, so at the last moment, before closing the pod, Jorgenson ran to her car and returned with a plastic windshield scraper, complete with a $4.99 price tag from Andy’s Auto Body still stuck on the handle.

She attached it to my utility belt with a grin. “I’ll add it to your expense report.”

When I thaw, my bank balance will be huge. Big enough for a beachy Fiji vacation. I negotiated hazard pay for all three hundred days and didn’t spend a penny. Other than the $4.99.

Human Resources wouldn’t let me off the hook for my monthly health insurance premiums, either. “I can’t use it,” I’d argued. No one wins arguments with HR.

I fumble for the scraper and work on the porthole. My fingers, still numb, have the dexterity of fish sticks. Health insurance better cover freezer burn. Finally, a small area is clear. I expect to see Jorgenson’s face peering in with her goofy thumbs-up.

Instead, there are rows of numbers lit on a screen. They blink. Binary. Maybe. My grey matter is thicker than a bowl of tapioca. The numbers disappear. A series of Greek letters replace them.

What the hell? This is a typical Jorgenson joke. Scientists always think they’re funnier than they are.

Other languages appear until I recognize English: TAP THREE TIMES IF THIS IS YOUR HUMAN LANGUAGE.

They’re jealous. This game is their payback. Espinosa’s 6’6” body didn’t fit in the pod. Yenz is a single father. Jorgenson is diabetic. Denial. Blander was five months pregnant. Definite denial. Baby Blander should be due soon.

Everyone remembers the firsts. Galileo. Avogadro. Newton. And Lord Kelvin, of course. All systems point to a successful, yet sluggish, thaw, making me the first cryogenically preserved human. There were dozens of lab rats and a monkey that preceded me, but it is my name and scientific contribution that will grace the pages of history books right after the photos of Armstrong’s flag on the moon. The press release is already saved on my laptop: ‘First Frozen Human – Thaw Successful after 300 Days. Solidifies Future of Space Travel.’

In three hundred days their assholes grew vast. If my brain were fully melted I would crack a Uranus joke. Even the time Jorgenson snuck habanero peppers into Yenz’s yogurt was funnier than this.

Hell no. Couldn’t happen. How would the pod stay charged? Did Luke’s uncle finally let him go to Tosche Station for those power converters? My brain isn’t that frozen. Anymore.

Warmth has finally reached my extremities. My fingers tingle. The monitor flashes, ‘Thaw successful.’ I stretch against the safety harness. Ankles. Hips. Neck. My joints ache, but function.

What if this isn’t a joke? Could Jorgenson have made me portable? Did she convince Andy of Andy’s Auto Body to construct a freaking galactic generator? That’ll be on my expense report, I’m sure.

Can’t do that. Dehydration is imminent unless my stink kills me first.

There is brightness. And vast silence.

I’ll need a new press release because this isn’t the Colorado lab. Not even Earth. 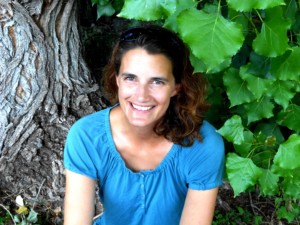 Holly Collingwood is a freelance writer and editor in Colorado. She was raised on wild blueberries and basketball in cold, snowy states: Alaska, Montana and Oregon. Her work has appeared in Mamalode, Sierra Trading Post, Molotov Cocktail, Glimmer Train and local publications. You can find her at CollingwoodWriting.com or on Twitter: @WriteColl.