Songs in the Key of Chamomile Rebecca Birch

Jessica squeezed the keepsake box in her pocket for strength, then stepped through the dangling curtain of finger bone beads that served as a door. A strand caught on the harp case over her shoulder. She plucked it free and waited just inside the dim room while the clattering susurrus faded.

Oil lamps burned fitfully, illuminating walls plastered with posters–Jimi Hendrix, Bob Dylan, the Grateful Dead. The air smelled of patchouli. An old woman’s head appeared from behind a stack of old LPs. Her long, white hair fluffed around her face, and tortoise-rimmed glasses perched halfway down her nose.

She waved a hand at a pair of chairs in the corner, one covered in magazines, the other holding a potted fern. “Come in. Have a seat.”

Jessica hesitated, swallowing against the dryness in her throat.

At Jessica’s nod, the old woman poured a steaming cup from a Delft-patterned pot. She offered Jessica the cup and saucer. “Who’re you grieving?”

Jessica sipped cautiously. The chamomile took the edge off her jitters. “My husband, Rick.”

“Didn’t need to. He’s standing just behind you.”

“Now, dear, no need to be afraid.” The old woman cocked her head, staring at the air over Jessica’s shoulder. “Not a looker, was he? But oh, his eyes when he’s watching you…”

Jessica blinked against the sharp sting of tears. That look in Rick’s eyes had been the world. She’d never really believed he could die–not even when the doctors made it clear as compassionately as they could–until he was gone.

“Brought your harp, I see.”

“The flyer said to bring something I associated with… the deceased.”

It still hurt to say the word.

Jessica had begged the mortician for a relic she could keep, something to make facing life without Rick just the smallest bit less terrifying. Despite his initial resistance, the mortician had finally relented and given her the last bone of Rick’s pinky finger and, with it, a weathered flyer topped with the words, Death doesn’t have to be the end.

Stupid, stupid hope, but Jessica couldn’t put it from her mind. Three months later, she finally got up the nerve to track down the address.

The old woman’s voice shattered Jessica’s reverie. “Finish up that tea, then let’s hear you play.”

Jessica downed the tea in three gulps. She handed over the cup and saucer and glanced at the chairs. “Can I move the fern?”

No matter the oddity of her surroundings, the ritual of tuning the harp was grounding. By the time all the strings were settled, the old woman had cleared off her own chair and sat cross-legged in it, her bare feet sticking out from pink-and-purple harem pants. She smiled encouragingly. “Go on.”

Jessica drew in a breath, set her fingers to strings, and began to play a Celtic tune. Its slow, modal melody was a familiar one she used to play while Rick gave voice to the words, his rich baritone a caress down her spine.

The old woman swayed, eyes closed, hands palms-up on her knees. She began to hum, so low that at first Jessica wasn’t sure it was coming from the old woman at all. The vibrations in the air were almost tangible. For a moment, Jessica thought she felt rough fingertips against the back of her neck.

When the song came to an end, the old woman opened her eyes with a soft exhale. “Oh, yes.  He’s eager to be with you again. But you have to understand, this won’t be like truly having Rick back. You won’t be able to ask questions or hear his words. No affirmations. No love vows. Only the sense of him there beside you. Some folks find that almost-there-ness worse than a soul being lost. If he’s gone, it’s easier for you to move on.”

Jessica’s knees tightened around the soundboard. “I’m not looking to move on.”

“You know the price?”

With hands that trembled only a little, Jessica withdrew the little carved box from her sweater pocket. The soft thud of the bone hitting the side when she tipped it felt heavy. Final. The bone was real. A part of Rick that Jessica could cling to forever. If she gave it up and this woman’s promises were nothing more than wind, would she regret it forever?

“Only if you’re certain, child.”

The fern rustled, despite the lack of a breeze. A frond grazed Jessica’s shin. She shivered and offered the box to the old woman. “Please.”

The old woman stashed the box between her breasts, reached over, and laid her hands over Jessica’s eyes, her voice slow and hypnotic. “Play your memories. Play your dreams. Your wishes and your fears. Play Rick’s voice. His eyes…”

Jessica didn’t need to see to obey. Her fingers danced over the strings. A gentle ballad with the whispered hopes of love new-sprung. The insistent rhythm of spilling passion. A wistful air for the child who would never be. His eyes–oh, his eyes–as they clouded with pain. Tears became lament, pouring from the harp’s belly.

And with each note, a subtle shift in the instrument’s timbre. Warmer, deeper–curling low around the base of Jessica’s spine. Rick–given new life in the voice of the harp. Forever as close as the touch of her hand.

Jessica’s fingers stilled, and she slowly opened her eyes to find a bare room, coated with dust and the lingering scent of patchouli. She licked her lips and packed away the harp with utmost care.

A single set of footprints marked the dusty floor. Jessica followed them wordlessly into the night, solitary, but no longer alone. 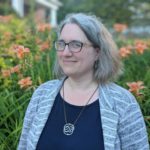