Meditation for the Dead

Make It A Good Lie – Versimilitude

CAPS LOCK and the Ellipsis of Doom

The Sun sucked in her gravity, drawing the planets taut about her waist. It’d taken far too long to bead them all onto her 1-dimensional strings. She wasn’t giving up now. Planets shuddered from the strain, beaded so tightly that they really didn’t fit, bulging on her solar flares.

“I think they’re just too small to wear,” said a random moon. “Perhaps as earrings?”

“Shut up,” said the Sun. She was very conscious about her weight. “I’ve been hitting the elliptical. I’m downright svelte!”

The planets made an extravagant belt, unlike anything else in the cosmos. She’d collected all the flotsam in her solar system, including Saturn, Uranus and Neptune, all of which had their own belts (though those were made of ice and asteroids). The planets shuddered from forced orbit, straining to stay in place.

The moon worried. “Yeah, but you’ve been hitting the fusion more than the fission lately. They might not fit like they used to.”

The Sun rotated until she faced this moon. She did not move often, so it was very intimidating.

“Are you calling me oblate?”

“Absolutely not,” said the moon, shaking its head, not that you could tell since it was spherical. “You’re petite by star standards.”

“Of all the insensitive…”

She yanked harder, trying to clasp the end onto Jupiter. Its red spot would make a spectacular belt buckle. Unfortunately it was only a gas giant, and her hook slipped through. In one terrible moment, the Sun’s grip gave. The planets sprayed across space, only rolling to a stop because of her latent gravity. Seeing the planets fall back into orbit around her enormous mass hurt almost as much as the belt breaking.

The random moon had no choice but to follow its planet. The last thing it saw was the Sun letting out a sulking starburst.

Time passed. We’d say years, but with all the planets wobbling, solar revolutions weren’t exactly reliable markers of time. The Sun left her planets strewn out there, too discouraged to make them fashionable anymore. None dared tidy their own gravitational flotsam into belts, leaving little celestial bodies drifting wherever they wanted.

The moon approached her at the next solar eclipse. It consoled, “Call it an avant garde belt. You’re setting a trend. All the stars are doing it now.”

They both knew better. Most of the cosmic lights were arranging their planets in this fashion now, but the Sun had grown distant from them. They might as well be white dots on her horizon for all she cared. And since the breakage the Sun had put on even more mass, eating out of depression. She’d swollen up into a pudgy yellow star.

“Whatever,” she said, fusing some hydrogen crumbs into helium.

The moon revolved, frowning at its earth. The Sun’s rays poured down over one of its sides, bathing the little blue and brown thing. It was filthy, covered in its own chemical stew. It made no attempt to clean itself up.

“Who knows?” The moon said, pushing the planet’s tides around a little. “Maybe something will pop up down there and take your mind off things.” 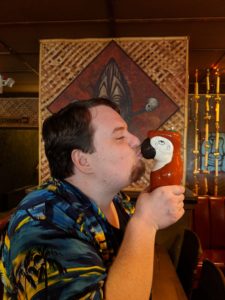