<< Danilo tends to tall, yellow flowers. The sky is pink and clear, with two suns, the big Kabir and the small Saghir, smiling upon the land. Danilo has no trouble breathing and takes large, decadent breaths, filling his chest to capacity. His friend Edwin stands next to him, and Danilo can see his own vacuum-suit-clad reflection in the metallic visor of Edwin’s helmet. Edwin chatters away, but Danilo does not hear Edwin’s soft, crackling voice. The sound is distorted, coming though the inside of the helmet, and the words are not anything Danilo understands. >>

Edwin is sick again and Danilo offers to pick up his shift. The air is filled with red particles of dirt and debris, and just walking from the barracks to the factory makes Danilo’s chest burn. He pulls up his once-white shirt, exposing his indented belly and protruding ribs, and he covers his nose and mouth. Everything Danilo sees before him is red.

Danilo looks up at the sky. It is covered in clouds so thick and gray, Danilo knows they will never clear up. He tries to remember how the sun looks. He fails, but he is certain there is only one sun, not two. He feels relieved, because that means the two suns and the pink skies from his dreams might still exist somewhere. They haven’t been ruined yet, like everything else. Like Danilo’s white shirt. Like Edwin’s lungs.

Edwin’s cough worsens and the factory doctor gives him some tea to brew, some pills to swallow, an inhaler to use when needed, and sends him back home. Danilo is there, too, missing his shift, but the pay cut and the penalty are worth it. Edwin is worth it.

Danilo asks when Edwin will be better and the doctor looks up at him over the taped-up plastic rim of his glasses. He stares for a long moment with blood-shot eyes, wrinkled bags underneath looking like they’ve collected a lifetime of tears. He stares and never says anything.

Danilo nods, thanks the doctor, and makes sure he closes the door as softly as he can.

Danilo sells all of Edwin’s measly possessions. He keeps a dog-eared, red-dirt-covered copy of a children’s book about boys growing up in nature, frolicking in creeks, catching fish and rabbits. Danilo wonders how it is that the rabbits did not eat all the crops.

Danilo wonders if he should sell Edwin’s inhaler. It is almost full and could give someone weeks of relief. But the inhaler is the last thing that touched Edwin’s lips.

<< Danilo tends to tall, yellow flowers. The sky is gray and dim, with two suns, the big Kabir and small Saghir, barely visible through the clouds. Danilo should have no trouble breathing, but his chest feels too heavy to let in air. Danilo sees his own vacuum-suit-clad reflection in the metallic visor of a friend’s helmet. Danilo knows the friend is not Edwin, because Edwin is dead. The friend chatters away, but Danilo misses Edwin’s soft, crackling voice. The sound is distorted, coming though the inside of the helmet, and the words are not anything Danilo understands. >>

Danilo sells Edwin’s copy of the children’s book. He no longer wonders if rabbits would eat all the crops. He has never seen a rabbit because they hadn’t existed in many generations, but he is certain that they deserved to live as much as anyone, and he wishes them all the crops they could possibly eat in rabbit heaven.

The book sells for more than Danilo could imagine. He finally has enough to buy himself a spot on the shuttle.

Danilo tends to tall, yellow flowers. The sky is pink and bright, with two suns, the big Kabir and the small Saghir, emerging on the horizon. Danilo takes large, decadent breaths, filling his chest with the cool, fragrant air of a new morning. His friend Gael stands next to him. Danilo cannot see his own vacuum-suit-clad reflection in the metallic visor of Gael’s helmet, because Gael does not wear a helmet. Gael was born here, on Nebessa. He chatters away, but Danilo still misses Edwin’s soft, crackling voice. Gael’s sound is distorted, coming though the inside of Danilo’s helmet, and Danilo understands almost all the words now.

The atmosphere on Nebessa is different than it had been on Earth centuries ago, before the clouds thickened and the red dirt filled the air, different from what human lungs were made to respire. Like most native-born Nebessa, Gael walks about and breathes without a vacuum suit, his DNA altered by in-utero gene therapy. His skin has a purple tint, but his eyes are brown and twinkling, his teeth thick and white, his smile wide and joyous. He is the same age as Danilo and loves working in the fields, tending to the crops.

Danilo smiles underneath his visor. Edwin would’ve loved it here. Danilo is an adult, so it will take years for his gene therapy to fully take effect, but Danilo is not going anywhere.

The flowers that Danilo tends to are called sunflowers. It is the same kind that used to grow on Earth, and it adapted remarkably well to life on Nebessa, growing taller and stronger on this new world. Danilo reaches up with a gloved hand and touches the petals of the tallest and strongest specimen in the field. No one knows, not even Gael, that Danilo has named the sunflowers after Edwin. One day, Danilo’s hand will be out of the glove, and he will touch the flowers bare, gently, ever so gently, with all the gentleness they deserve. 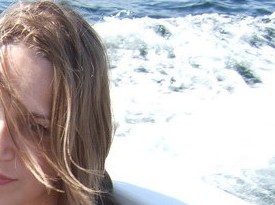 Somewhere in the Midwest, Maura Yzmore writes long equations, weird fiction, and goofy poetry. Her flash can be found in The Arcanist, The Molotov Cocktail, Bending Genres, and elsewhere. She sometimes says long, weird, or goofy things about writing on her website, http://maurayzmore.com, or on Twitter @MauraYzmore.