The windowless theater makes it impossible to keep track of the days, but I am certain that years have passed since Fyodor’s last visit. I fear that he has died while his magic has not, for here I still stand, a swan maiden poised forever on pointe. Forever cursed.

I often wonder how our Swan Lake tableau looks from the seats: a circle of ballerinas in white-feathered skirts, one arm raised, the other swept down and back, the entire body mimicking the curve of a swan’s neck. The other swan maidens are like ghosts lurking in my peripheral vision, hinted at, but never fully seen. My gaze is fixed on the principal dancer at the center of our circle, Roksana in the role of Odette, her hair’s tight, perfect bun partially obscured by a sliver of my outstretched arm. Fyodor froze her in arabesque penchée, with her expression radiating an elegant strength I used to envy. But I’ve come to learn that her strength was as affected and fleeting as any dance pose.

When Fyodor cast the spell, the audience of course gave him a standing ovation. It would have been deemed rude not to applaud a man’s artistry in his own theater.

The parties he threw to celebrate his triumph were maddening. High society flocked around us, ran their hands over us, gushed over the new artistic direction Fyodor’s work had taken. Yet for every stranger’s hand that molested me, I felt nothing. I watched counts and countesses strike lewd poses with Roksana. I heard their laughter, but had no voice of my own with which to object. I never dreamed that I would long for the cold, sticky feel of spilled champagne until some baron admired the way it trickled down my leotard.

“You will never age, never hunger, never thirst,” Fyodor once told us. “You will be forever young, forever dancing.”

What could we say? People like us had no voice, even before Fyodor’s spell ensured that we would never speak again. When the alternative was starvation, you accepted the contracts you were offered, no questions asked.

And so now our fates are like that of Odette in Swan Lake: we are helpless, waiting for someone to rescue us from our curse. Yet in a way, it is poor, pitiable Odette–or Roksana, rather–who has given me enough hope not to go mad. All this time, Roksana’s expression has been changing, the muscles in her face moving in barely perceptible degrees.

Fyodor’s grand parties thinned after time, as did he. His skin grew wrinkled and sallow, and all that remained of his once-dark hair were scattered wisps of gray. He seemed to crumple in on himself, neck and shoulders curved in a mockery of our swan-like poses.

During his last visit, he stroked the curve of my raised arm and admonished me for not holding it as high as the other swan maidens. Then, for the only time that I can recall, he admonished himself as well.

“The perfect spell would have allowed me to correct such a flaw. But magic isn’t perfect, is it?”

That was when I noticed the marks on Fyodor’s arms–the kind of puckered red sores left by a doctor’s leeches.

“You are family,” Fyodor told us before leaving that day. “The only family this forgotten artist has left.”

As more unmarked days pass, I suspect that must be true. The few who come to the theater now speak to each other of plans to purchase, yet they never do. They say the neighborhood is no longer what it was. They say Fyodor’s lingering spells are all that keep the vagrants from piling their filth into the aisles.

What I can see of the theater has fallen into disrepair. The velvet curtains are tattered and thick with dust; fabric that was once the vibrant red of fresh blood is now the tired, mottled brown of a scab. The luster has faded from the proscenium’s golden trim. The theater’s chandelier isn’t visible from where I stand, but I would not be surprised to hear it come crashing down. The vagrants are probably safer outside.

Roksana’s expression has finally finished its slow transformation into a look of madness and despair. Whereas my arm is unchanged, Roksana’s skin, once so smooth and pale, has taken on the cast of stone. And that stone is chipping.

Unlike her, I will not make the ballet heroine’s choice. I will not dive into the lake to drown myself as Odette did, all hope lost. I have begun to move my foot. Every prolonged, infinitesimal motion inspires excruciating pain, pain that demands a scream I cannot release. But before this theater collapses to the ground, I will take my first step in years. 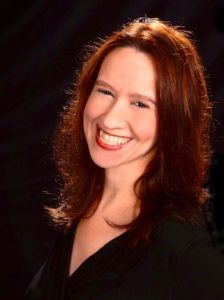 Barbara A. Barnett is a Philadelphia-area writer, musician, orchestra librarian, coffee addict, wine lover, and all-around geek. In addition to previous appearances in Flash Fiction Online, her short stories have appeared in publications such as Lady Churchill’s Rosebud Wristlet, Beneath Ceaseless Skies, Fantasy Magazine, Intergalactic Medicine Show, and Daily Science Fiction. A graduate of the Odyssey Writing Workshop, she is currently managing editor of the workshop’s blog and a critiquer for the Odyssey Critique Service. You can find her online at www.babarnett.com.