Every Chinese family celebrates Ching Ming a little differently.  Not everyone burns paper money at the cemetery like they teach us at Multicultural Day at school.

My family has a barbeque at the beach where we sail paper ships out to sea.  The Pacific Ocean reaches from California to the coast of Canton, so our paper boats are how we let our ancestors know we have not forgotten them.  That’s what Dad told us.

This year Dad and my uncles let us kids put the boats in the water, having us wait until the tide goes out, so the little ships will be pulled out to sea.  My kid brother Paul flails about in the water as he tries to push his boat out faster than mine.

Grandpa is not here to complain.  He is frail with bowed legs that barely carry his weight.  The bags under his eyes have started sagging into his cheeks and he is always muttering in the Chinese my cousins and I barely understand.

Once Uncle Jim gets the firepit going, the aunts crack open the coolers and spread the food.  At sixteen I’m one of the older kids and have to help cook the chicken.  My cousin Keith roasts a fish he caught off the pier.

By the time the food is ready we can’t see our boats any longer, lost beyond the waves.

So I’m surprised when Paul trots back after dinner with a wet paper boat in his hands.  It is his.  He’d colored it when he made it, so the ancestors would know it was from him.

Uncle Jim takes the boat, unfolds it, and we lean close to see what’s inside.

But Uncle Jim has already closed the paper around the ring and he jogs over to Dad and the uncles, calling to them in Chinese.

We scoop them up and shake them apart.  I find a gold chain and an earring; my brother another ring.

“Gifts from the ancestors.”  He grins.  “They haven’t responded in a long time, but I think they know it’s been almost twenty years.”

“Is this some old custom you never told us about?”  I picture the uncles slipping away and packing little boats to wash up for us.  But Paul’s boat had been his.

“You’ll see soon enough.  Roast some marshmallows with your cousins.  It will keep you warm until Uncle Richard comes back with Grandpa.”

“He’ll come to meet the ancestors.”

“This is weird,” I say to my brother.

But we roast marshmallows anyway.  My cousin Dana is a college freshman and says this might be some Buddhist thing.  I don’t think so.  I’ve never seen Grandpa pray to Buddha.  He keeps an idol in his home, but it looks like a weird fish.

Uncle Richard returns and opens the side door to his mini-van.  “Grandpa is here, kids!  Come say ‘good-bye!'”

Shouldn’t it be “Hello?”

Then something pale and squat slides through the door, covered loosely in a fraying bathrobe.  It is Grandpa.  I know from the horrible bags beneath his eyes.  His hair is gone, and his skin slick.  He waddles two steps and raises an emaciated hand to greet us.  His fingers are webbed.

Paul whispers, “What’s wrong with him?”

“Grandpa is getting old and it’s time for him leave us,” says Uncle Richard.  “He will go with the ancestors.”

Go where?  It is dark, and very late.  There is no one on the beach but us.

The bathrobe slips from Grandpa’s shoulders revealing a boney torso and pale, oily skin.  He can no longer stand straight, his legs bent and protruding like a frog’s.  In a gurgling voice he speaks Chinese to his sons and their wives.  My cousins, brother, and I huddle together.

“Something about letting us know,” says my cousin Heather.  “They want to take us to the water.”

I look to the surf, where waves have deposited another five boats on the shore.  Shadows bob in the darkness, just out of reach of the firepit’s light.

“Mom, what’s happening?” I ask, when she comes over to us.

“When your father’s line gets very old, the sea calls to them,” she says.  “I know it’s a little scary, but it’ll be all right.  The ancestors are generous and they’ve allowed your dad and I to have a good life.”

The shapes drift closer, coming in with the tide.  I see pitch-dark eyes, hear the slap of water against webbed hands.  I don’t want them any closer.  I back away and bump into Dad.

“Come on,” he says.  His hand closes around mine, inhumanly strong.  “It’s time to meet the ancestors.”

Previously published in Crossed Genres, 2014. Reprinted here by permission of the author. 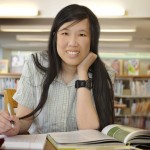 Laurie Tom writes fantasy and science fiction from the comfort of her childhood home.  When not composing stories about things that don’t happen in real life, she enjoys video games and anime.  Her fiction has appeared in venues such as Strange Horizons, Galaxy’s Edge, and the Mammoth Book of Dieselpunk.