I was having an eat-an-entire-pack-of-Oreos type of day because I’d stepped on my glasses getting out of bed, Ernest had accidentally tossed my algebra textbook into a puddle, and the magic toaster was acting up again.

The toaster gleamed menacingly, its dial turned to the burn-everything-to-a-crisp setting.

I slammed a piece of bread inside. “Just give me toast this time,” I said.

A swarm of eggplants popped out, one after another, splattering on the floor. The toaster knows I hate eggplant.

It’s bad enough being the guardian of a magical toaster that no one knows about, but it’s even worse when it spits up random stuff that your mom then blames you for. (Like, I am sorry that a storm cloud rained all over the kitchen and ruined your favorite tea cozy, but it wasn’t me. It was the toaster!)

The toaster spat out melted candy hearts. A bunch got stuck in my hair, and a blue one splattered on my glasses (which were held together by masking tape).

Why had I agreed to look after this infuriating toaster?

“I am going to leave you at the dump,” I muttered. The toaster and I both knew this wasn’t true. If I didn’t give the toaster a weekly supply of bread, it would eat other things—stop signs, endangered animals, headphones that belong to your sister which she then blames you for losing. (Ask me how I know.) I had a moral imperative to keep the world safe from this toaster, which meant not ditching it in the lot behind that restaurant that sells fried fish, which the toaster would have totally deserved.

The doorbell rang. I peeked out the window. Ernest stood on my porch, looking sheepish.

In a panic, I scooped eggplants into the trash and pulled candy goop from my hair. I’ve had a thing for Ernest since the fifth grade, when he climbed a tree to save a kitten. We sit next to each other in band (I’m first clarinet, he plays the oboe), and we had just started to become friends based on a love of rock climbing and our mutual hatred of percussionists who do not know how to tune timpani, and so spend the entire band period changing the pitch of the timpani while quietly saying “oh man.”

I opened the door, and there was Ernest in his button-down shirt and cute glasses looking like a flustered demi-god, whereas I was covered in eggplant.

“I’m sorry about your textbook,” he said in a rush. “Is it ruined?” Until that moment, I had forgotten about my algebra book, which was sulking soggily on the kitchen counter.

I was having trouble forming cogent thoughts, so I shrugged. What I wanted to say was, I would sacrifice any number of textbooks for you. Let’s run away together from this life of drudgery and recalcitrant toasters.

“I was thinking we could try blow-drying it,” said Ernest.

The toaster made a sound like a mix between a screech and a growl. It was still hungry.

“Just our toaster. It acts up a lot. Maybe if I shove it into the cupboard, it will quiet down.”

This was what happened when a magical item imprinted on you. You had to care for it, clean up its messes, and let it ruin your love life.

We went to the kitchen. (Big mistake.) The toaster crashed to the floor and lunged for Ernest’s shoe. I grabbed the bag of bread.

“Not now, toaster,” I said under my breath, but the toaster had no sense of loyalty or self-preservation. The growling continued.

I shoved a piece of bread into the slot.

I was hoping that the toaster wouldn’t do anything weird in front of Ernest. After all, when I’d tried to show my mom our crazy magical toaster that would eat anything when you weren’t looking, even earrings that your daughter definitely had not borrowed, and spit out things like tubas and maps of Switzerland, it had popped up perfectly toasted bread.

However, the toaster hated me, and so a flurry of snowflakes exploded from the slot.

Ernest and I stood there, soaked.

“I can explain,” I said, although I had no idea how I would explain anything. “I am usually not this weird.”

Why was it that when I wanted the toaster to reveal its powers, it stayed distressingly normal, but as soon as a cute guy came over, the toaster went all magical? Did the toaster know something about Ernest that I didn’t?

Ernest blinked and sputtered. He took off his glasses and wiped them on his shirt, then put them back on. When he looked at me and grinned, I almost fell over because his smile is like witnessing one thousand fireworks going off all at once.

“You have a magical appliance, too?” he asked. “I thought I was the only one.” He lowered his voice. “Sometimes, my dishwasher does this weird portal thing, only no one believes me.”

Not only was Ernest the most amazing guy ever (like, I could listen to him play that Prokofiev solo all day), but a magical item had imprinted on him, too. And I never would have known if my toaster hadn’t started acting up. Was the toaster, for once, actually trying to help me?

As Ernest and I cleaned up the snow, he told me about the strange worlds he’d visited through his dishwasher. Ocean worlds with crystal fish, sun-baked deserts sprouting vermillion and crimson cacti with needles that stretched to the sky, forest bubbles floating in a magenta sea. “I could take you to see one,” he said. Melted snow sparkled in his hair. “Want to go now?”

Did I want to frolic in a magical land with the guy I had been crushing on for years?

This was the best day.

Before we left, I whispered to the toaster, “When I get back, I’m giving you infinite bread.”

FFO: What other work of yours would fans of this story most enjoy?
BG: I have a couple of other stories that fall into the same sort of funny, silly, feel-good category. “Murder or a Duck” is another fun story of mine, with time travel, general silliness, and a wife who just wants to find her husband. I also think “Make Your Own Happily Ever After” (appearing in Trenchcoats, Towers, and Trolls in 2022), which is a cyberpunk fairy tale based on Cinderella, has a similar sort of feel, especially for people who enjoy a romance element to their stories. 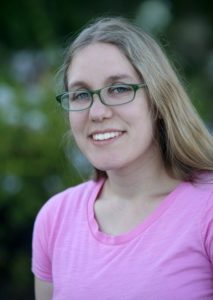 Beth Goder works as an archivist, processing the papers of economists, scientists, and other interesting folks. Her fiction has appeared in venues such as Escape Pod, Analog, Clarkesworld, Nature, and Horton’s The Year’s Best Science Fiction & Fantasy. You can find her online at http://www.bethgoder.com