The Brownies of Death Chuck Rothman

The dark, delicious aroma of brownies filled the kitchen as they cooled. Betty Compton put the kettle on the stove. Cheryl had given her an electric one for Mother’s Day, but Betty preferred the old fashioned way.

The phone beeped. They don’t ring anymore. Betty wished they did. How did you know it was the phone without a good, solid ring?

It was Cheryl. No surprise — Betty got few phone calls. Most were people trying to sell timeshares as if she had a lot of time. But she liked talking to the salesmen, even though she never bought anything.

This call was pleasantries and reports on the grandchildren. Matthew was graduating; Kimberly scored 20 points in basketball. Cheryl and Todd went to see a play Betty had never heard of, though from Cheryl’s voice; it evidently was quite famous.

After a few minutes, Cheryl got to the point of her call.

“But, Mom, you’ve been alone since Dad died.”

“Mom, you know we only want the best for you.”

Betty sighed. She had heard those words before, and they were always an inadvertent lie. “I’m not going to a home,” she said. “And I’m not moving in with you, either. You have your own life and don’t need me to be a burden.”

“Oh, that’s the doorbell,” Betty said. “I’m expecting someone. We can talk later. Love you.” She hung up.

The doorbell rang a second time. Betty was glad of the relief.

She looked out the peephole. It was Death.

Betty smiled and opened the door.

Death smiled back. He looked very little like his pictures. His face was far from gaunt, maybe even a little bit chubby, and he didn’t wear a ridiculous black robe and hood, just a regular business suit. Today, his tie had seagulls on it. “You know I can’t keep away from your brownies, Betty.”

“I have a fresh batch just for you. And the water should be hot for tea. Make yourself at home.” She went into the kitchen just as the kettle began to whistle. In the cupboard were the tea bags. Lipton? No, not today. She found some Assam in the back of the cupboard.

Death had turned on the TV when she returned. “It’s not the same since they took off The Edge of Night,” he said.

Betty agreed. “It’s all talk shows now. I get tired of them.” She placed the brownies and tea on the coffee table in front of him. “How’s your day been going?”

Death shrugged. “The usual. That plane crash in Argentina kept me busy.”

“Was there a crash?” Betty asked. “You know I never watch the news. That’s what old people do.”

Death bit into a brownie. “I’ll tell you. These are the best. How do you get it so fudgy?”

“Were you on the phone when I rang?”

Betty nodded. “Cheryl again. She doesn’t like me living alone. Afraid I’d fall and won’t be able to get up. She’s been watching too much TV.”

“She’s your daughter. She cares about you.”

“I’m sure she does. But she’s hinting I go into a home. And the last thing I want to do is hang around with old people.”

Death finished the last of the brownie and licked the crumbs off his fingers. “That was delightful, Betty. And is this Assam tea?”

“Is that good? I can barely taste the difference.”

“It is, Betty. It’s very good.” Death got up and then put his hand on Betty’s shoulder. “Thanks for all this. I need to get back to work.”

It was the moment that always made her feel low. “Can’t you stay for another cup? I mean, I’m sure people will be happy to wait a bit.”

Death rarely got into the details of his work. Sometimes Betty wondered what it was like. But she had a feeling that if she asked, Death would go quietly and never come back. She had to make do with hints and implications.

“Betty, can I ask a question?”

“That was a question right there,” said Betty, smiling. She loved to use that joke with Tom.

Death gave a slight smile. “Why are you so kind to me? You know it’s not going to change anything. When it’s your time, I will have to come for you.”

“So? You have your family.”

“Cheryl is out in Denver. It would take hours to get to me. No one wants to die alone,” said Betty.

She took his hand from her shoulder and kissed it. Then she looked into his dark eyes. “I know that, whenever I go, I will see the face of my best friend.”

“I need to go, Betty,” he said, mumbling like a teenage boy after a girl said she liked him. “Keep in touch. Text me.”

She got up and led him to the door. “You know I don’t have a cell phone.”

Death smiled. “Next Wednesday, then?”

Betty nodded. “See you next Wednesday.” She watched as he turned down the hallway.

The door in the apartment 3B across the hall opened, and Mrs. Rodriguez poked her head out. “Was that Death?” she asked.

“Yes,” said Betty. “Sometimes he visits. He likes my brownies.”

Mrs. Rodriguez thought for a moment. “Do you think he likes cheesecake?” she asked. 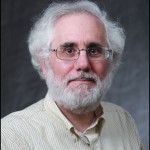 Chuck Rothman has been writing and publishing science fiction and fantasy for over 30 years, with stories in Asimov’s, F&SF, Analog, Daily SF, Strange Horizons, Digital SF Short Stories and in the recent anthologies Temporally Out of Order , Triangulation: Parch, and Futuredaze.  His novels Staromer’s Fate and its sequel Syron’s Fate are available from Fantastic Books. He lives in Schenectady with his wife, poet Susan Noe Rothman.