The Philosophy of Composition

The smell of wet ash slicked her throat. Jo felt the new skin stretching on her thighs and stomach as she stumbled past pools of plastic that might have been patio furniture. Blackened beams poked out of the rubble and the dead lawn crunched under her slippers. Nothing had survived that heat. Only Jo herself, strangely whole, scabbed and oozing under layers of bandages, still limped into the future.

After the muggy warmth of the ward, the cool morning air burned her lungs. Coughing softly, she checked her pockets, just to be sure. She had the fabric softener. She had the cinnamon broom from above the bedroom door. She just didn’t have the door itself.

But thank God it was still in one piece, mounted in its own stretch of soot blackened wall, hanging twenty feet above the rubble. Sunlit stairs led past the door, absurdly climbing to an attic that no longer existed. The rest of the house had slumped, bulged, and burst over the lawn, blazing as it shattered into breezeblocks and flaming spars.

She had seen it collapse, would have run back into the flames, but strong arms had held her down, apparently. She didn’t remember anything after the living room ceiling collapsed in a whirlwind of scalding plaster shards.

As she shuffled through the rubble, she was disappointed to hear voices. She’d hoped to get here before the bulldozers, but already a work crew swigged coffee at the far end of the garden. Jo wondered if any of her own mugs had survived. Would she need a mug? No, the fabric softener and cinnamon broom should be enough.

She ducked behind a mound of bricks and blackened tiles, trying to work out sight lines. No, the men would notice her climbing the stairs. She thought about distracting them, throwing a brick maybe, but she needed more time than that. The stairs jutted out over the rubble until only half way. Above that, concrete stubs poked from the wall, ending at a crumbled slab.

They used to kiss, her and Tino, outside that door, on the carpet, above the floorboards, perched on that shelf of cement. And she had felt the ground so solid under her feet, with his lips on hers. In the house they had built together.

Her legs cramped suddenly and she had to stand, hissing through clenched teeth to vent the pain. At that moment a man in a yellow hard hat looked up and saw her.

“Hey!” he shouted, setting his cup on her old wheel barrow.

Jo didn’t wait to see if he followed. She turned and scrambled over the rubble, pulling herself up a tilted slab of kitchen wall, ignoring the shouts and the pain, until she reached the stairs. There she stopped.

The charred treads emerged from a nightmare of broken glass and shattered crockery. Jo realized she had lost a slipper but she couldn’t stop now. As the shouts neared, she jumped to the first step, and amazingly her legs didn’t collapse, nor did the stairs.

She made it halfway before the demolition guys reached the steps. There they milled, unwilling to try their weight.

“Come down, love,” they called. “It’s not safe. There’s nothing supporting that wall.”

But Jo ignored them. There were no more steps. The concrete pegs seemed hardly wide enough to climb. Bracing herself against the blackened wallpaper, she leant out into space. Beyond the workmen, above their shouts, a siren swelled. She hadn’t bothered to hide the car and it wouldn’t be hard to track her down.

The pegs held. Hugging the smut-furred wall, she climbed, ignoring the pain in her thighs, in her trembling hands. As she made it to the shelf, a police car swooped into the drive.

Quickly, she turned back to the door. It was so scorched and warped. Maybe it wouldn’t even open. She hung the cinnamon broom on the nail above the door frame. The only thing she had saved, it looked absurd against the velvety, soot-caked brickwork. But it smelled and it would work. It had to.

“Miss Barker. Johanna. Come down. You shouldn’t have left the hospital.”

Jo didn’t answer. She pulled the pillow case from her pocket. Lying in her bed on the ward, the smell had seemed an insult. How dare they use Tino’s favorite scent? The smell of fabric softener wrenched Jo back to their bedroom hourly. There, Tino’s hairs still dusted the pillow, his slippers still held the warm shape of his feet. There the bed lay, rumpled, full of smells of its own, each taking her to far more private rooms.

Somewhere in the haze of painkillers and agonizing changes of bandages, the idea was born. It grew during silent visiting hours, swelling in the spaces between the ticking clock.

The smells would take her back.

Holding the cloth to her face, she breathed in deeply. The flowery scent filled her lungs. With it came the ghosts of cooking smells, the sound of Tino typing. The creak of the stairs.

Someone was coming up after her. She had only seconds to make this work. Reaching up, nearly falling out into the morning air, she brushed the cinnamon broom with her palm. Tino always complained. He was too tall, she said in return, but secretly she loved the smell of cinnamon in his hair.

The scent reached her, and inside, the need writhed like a child. As the policeman’s shadow fell over the burnt doorway, she clutched the handle. For an instant it stuck then with a lurch, the door swung wide. Eyes closed, she saw the bloom of light as sunshine through the muslin drapes they had chosen one rainy Sunday. She smelled the bedclothes and Tino’s musky body. She lifted her foot and stepped through into the light. 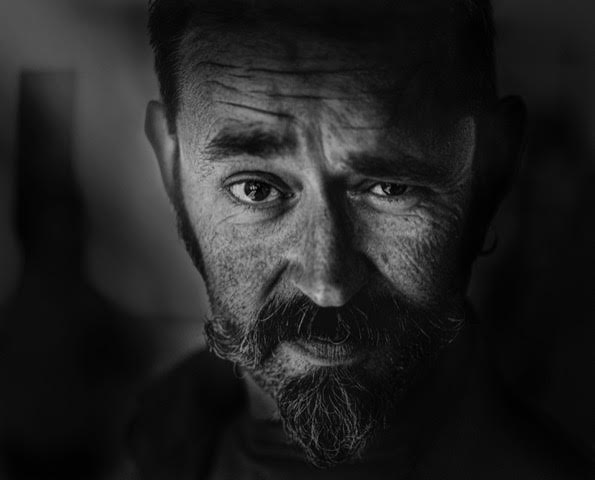 Damon Shaw is a writer and carpenter living in the Canary Isles with his husband and a menagerie of animals from peafowl to goats. When he can fit it in around puppet-making, classical singing, earning a living, and caring for ducklings, he writes.  His work can be found in various anthologies from Lethe Press, where Seven Lovers and the Sea was reprinted in best-of anthology, Wilde Stories; in Daily Science Fiction, even here in Flash Fiction Online, way back in 2009 with The Door. He has podcasts with the Drabblecast and the Dunesteef. Currently, he is staring at the sprawling mess of what was a short story but is now *coughs* a novella, or perhaps even *trembles* a novel, about polar-bear aliens with one nostril murdering each other before the long night falls… He is cautiously optimistic about the outcome.”