The Order Taker B. Pladek

Because they will never see it again, they always ask, cook me something from home.

Today it’s a human woman condemned for killing a policeman after he beat her Klanthi spouse to death. They had the nerve to kiss in public. “A Klanthi mossfry,” she whispers with her swollen, rebel mouth. “Please.”

Though Klanthi moss is as illegal as interspecies marriage, I have my sources. Like most galaxy-grade chefs, my restaurant shuttered under FreeCorp’s Patriot Consumption Act. Centaury was targeted early, since it specialized in multi-species cocktails, mixed from a barshelf of intoxicants I’d spent years researching. With a digestif of hermgrass I could send a human into rapturous delirium; with an aperitif of plinblood I could numb adventurous Iyaii who insisted on ordering dishes mildly corrosive to their stomachs. My recipes were trade secrets: I was proud of them, and of the interspecies clientele they attracted.

Then the Act came, and ninety percent of my menu was outlawed overnight.

Ingredients I’d sourced from twenty systems burned in ugly heaps whose pyres lit up the newsfeeds. I saved what I could, but not too much, or too openly. Chefs caught skirting the Act joined their ingredients.

My dealer on Klanth says she’ll have me fresh moss in three weeks. “That’s not enough time,” I say. “Do you have any dried?”

It’s ironic. The only place FreeCorp is willing to overlook non-human food is Death Row, where they hire galaxy-grade chefs to prepare it. We’re the only cooks who are trained to know what’s delicious to a Pneeb or deadly to a Haqr; our skill ensures FreeCorp’s condemned don’t die before they’re scheduled. And we’re mostly too cowardly to resist. Chefs don’t resist. We spend our lives taking orders.

At our interview, I tell the doomed woman, “I recommend eating your mossfry immediately beforehand. Immediately, do you see? It goes down easier that way.” I hold her eyes until she understands.

Some can’t understand, or won’t. I lie awake at night thinking about them.

There was the Pneebian journalist condemned for questioning FreeCorp’s labor policies. They submitted their meal request in writing, so I never had the chance to speak with them. Or the Haqr artisan for whom I could not find a translator, though I cooked him a decent roast before he went to the Cliff.

The Cliff is the great symbol of FreeCorp’s frugality. Lethal poisons are expensive, and with so many species with so many distinct chemistries, onerous to research and administer. But blunt-force trauma kills most things. During the freefall, the newsfeeds scroll the numbers: Life in Prison = $2,349,211.23 of YOUR Tax Credits. Gravity = Free. FreeCorp Saves! They ensure the scroll never obscures the impact. When Earth-1 gravity is insufficient, they tie weights to the convict’s neck.

I always watch the ones I cook for. I can’t help it.

Of my failures, the worst was the Iyaii from Xanthus Colony—formerly Iyniir’aiini—who blew up seven FreeCorp buildings whose construction had bulldozed sacred Iyaii land. She asked for a charred sandelk’s heart, to be eaten as custom demanded, three days before death.

I pleaded with her. “One hour. Goes down easier, do you understand?”

She leapt from the Cliff singing.

It’s true, I think as I dice the dried Klanthi moss and soak it in jus. I’m a chef, which is to say, a coward. I don’t know if I can call what I do resistance.

When the oil spits I slide the moss in, dusting it with pepper and fivespice. Behind the wire cage the doomed woman watches, her eyes red.

Chefs don’t firebomb buildings or stage rebellions. We sweeten life. We make it a little easier. I don’t know if I’m different now that I ease death, instead.

Glancing over my shoulder, I reach behind the spice-rack to a row of small, unmarked bottles, the last remnants of Centaury’s barshelf.

What I do know is this: as a chef, my task has grown from giving diners what they want to giving them what they need.

Over the sizzling pan, I uncork the bottle and shake loose a single drop.

With a last aromatic flip, the stirfy is finished. I turn it onto a plate.

When I slide the dish in front of her, the woman draws a deep breath. Her face trembles in the steam. “Oh Soui,” she whispers, “My love.”

I check the clock. A half-hour to the Cliff. “It will taste best if you let it cool first. When you’re finished, get up slowly. Don’t speak, and try to walk straight.”

She nods. Her eyes are brave. “Thank you, chef. It smells delicious. Like home.”

Hermgrass, I silently correct her. Then I bow, and turn away.

On the way down she smiles, like a woman savoring love, or death, or the best meal of her life. 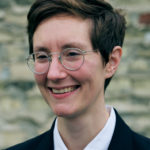 B. Pladek is a literature professor and writer of speculative fiction based in Wisconsin. She is a graduate of Clarion West 2018 and has fiction published or forthcoming in PodCastle, Lackington’s, and Bourbon Penn. She tweets @bpladek and blogs occasionally at https://thecalloo.com/writings-brittany.