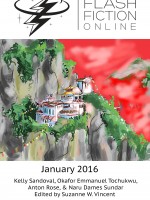 A Revolution in Four Courses

The Retelling of Jeremiah

The Power of Contemplation

The Retelling of Jeremiah Kelly Sandoval

There wasn’t much left to pack. The final box, only half full, had the last of the comics and journals from Jeremiah’s childhood. There was the inventory, of course, but he’d hired movers for that.

So many dreams being stored away. Jeremiah stroked the cover of a Conan comic, and it ripped under his touch. The greens and browns poured onto his skin, wrapping his forearm in a patchwork of jungle vines, while the letters clustered at his wrist. He could hear birds and the tinny music of his cell phone.

He pulled away from the comic, and the colors spilled out between his fingers, the letters splashing back into place like tiny stones.

“Hi, Dad. So, you’re signing today, right?” she asked, in that breathless, exhausted way she had. With two daughters, and a third on the way, she had no time for an old man’s foolish grief.

“I said I would.” Even still, the words tasted bitter. “You used to love this place.”

“When I was eight. When you’re eight, it’s fun to have a dad who pretends to be Gollum.”

Not so amusing, when you’re twelve. And she’d never had the knack of it; the books didn’t wake to her touch.

“Don’t I? You’ve been failing for years. They’re offering a lot of money. You need to think of your future.”

He needed to think of her future. Of his grandchildren’s future.

“I was thinking of coming down for Christmas.” He picked up his pen from where it rested on the first of his journals and wrote “Tanya” on the box. His granddaughters liked comics.

“Not this year,” Tanya said. “With the new baby, I just won’t have the energy.”

He believed her. But there was always a reason. He’d tried after her mother left them. But she’d wanted him, and he’d wanted to be anyone else. He’d been, at best, a distracted parent.

He heard distant shouting from her end. “You have to go?”

“Another disaster.” She sighed heavily, and he pictured the face she’d made as a child while arguing for more dessert. “Dad–“

“You’ll be glad you did.” She was smiling. He could hear it. “Maybe we’ll come visit next summer.”

They said their goodbyes, and Jeremiah turned his attention back to the empty bookstore. Most days, he only got one or two customers. When he’d first opened the store, it’d been different. He’d taken joy in matching the books to his clients. This one for a dirt-smudged child, that one for a lonely businessman, another for a heart-hurt teen. Books knew how to reach those hurts.

But he’d collected his own pain. Margaret, who’d grown tired of a husband who was always half-caught by some other world. Jacob, who’d enjoyed having a lover who spoke of Mars and Middle Earth like real places. Jacob, in a hospital gown. The long years of treatment, remission, return. Goodbyes.

And Tanya? Well. Children were meant to move on.

Which left the books. He walked down the aisles, saying his goodbyes. He touched a worn red paperback, tracing the B in Bradbury. The spine rippled, and the words crawled up his index finger, pooled in his palm, then looped themselves around his wrist.

His hands took on a golden warmth. A sixth finger extended itself as his broad wrists slimmed. He smelled dust and wine trees.

He remembered what it meant to be a woman of Mars. The long empty days. The husband who no longer cared. The dreams of blue-eyed strangers. Gently, so not to break subject from predicate or interrupt the flow of adjective to noun, he pulled himself free of the magic. His fingers grew plump as the smell of dust became the smell of old books.

He could not afford to drift, yet. The contract needed signing. He thought of the woman’s husband, hunting earth men in the green valley of Mars. Jeremiah understood. Tall, blue-eyed white men, with their ships, with their money, with their talk of opportunity.

He returned to his desk, where the contract waited. He was careful not to touch it, all too aware of the story it told. So many words to say so little. You can’t stop us, it’s over, take this and be grateful. But Tanya was right. It was a lot of money. She had the girls to care for.

He signed, dated, initialed by the x until it was done. The pen, he fiddled with, testing its weight. One left a note, for journeys and suicides both. It was the polite thing to do. But there were stories that couldn’t be told, only experienced. She wouldn’t forgive him, not in this narrative. He accepted that.

He walked to the door and flipped the sign from Open to Closed. As he made his way back to his desk, he traced the spines of his books. Fragments of selves left inky kisses on his fingertips and faded away. He had dreamed so many lives.

He picked up the journal on his desk and touched the first page.

Today, Aunt Grace showed me what we could make the books do.

His fingers shortened, thinned. The words climbed with a child’s eagerness, carrying the smells of asphalt and sunlight. They poured across his chest, encircled his shoulders, touched his neck. There was a knack to holding them there. To visiting a story, without inhabiting it.

Could you change a story from the inside? Be more attentive? Catch cancer in time? Show a young girl that she meant more to you than a universe of other selves?

Jeremiah let the words climb, filling his senses with the smog and humidity of a Chicago summer. His mother was calling his name. 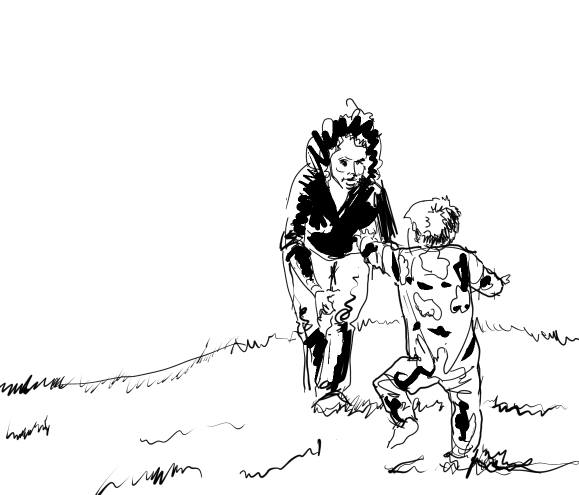