“Cut out her heart and bring it to me,” the queen said, and so the huntsman did.

He brought no deer’s heart in its place, for the huntsman was loyal to his queen. He brought her the heart, and she ate it, and the blood stained her lips like dye. Her wrinkled skin grew pale and smooth, her greying hair blackened, and she laughed as she finished the last bite.

Now, in the cold darkness of the wood, the princess’ mutilated body lies waiting for the wolves. The stench of putrefaction draws scavengers of all kinds. Ants devour the flesh of her lips; birds steal strands of her dark hair; her pale skin grows sickly and bloated. Ravens peck out her dull, dead eyes.

But others find her body before the wolves. They mutter amongst themselves in the shadows of the wood, and argue, and agree, and carry the corpse to their home, trailing blood as they go.

They are master craftsmen. They slaughter ravens for their feathers, and fashion the feathers into hair. From fresh, red meat they cut new lips. Sapphires from the depths of their mines form new eyes, glittering like frost in the lifeless face. They lay the body on a bier, and last they craft a heart and place it in the empty, gaping hole the huntsman cut. No heart of flesh, this; their magic is of a colder sort. The heart they place within her is formed of pure, freshly-fallen snow.

They chant as they work, incantations to the dark powers of the wood. And as they put the heart of snow in place, the flesh closes and knits together. It becomes white as the snow inside, cold as winter’s touch.

Their servant rises to do her work.

Through the long months of winter she works, doing whatever task her craftsmen-masters set for her. She rises at night and rests at dawn, returning to the bier where her body was restored, sleeping in the thin winter sunlight that pierces the leaves of the trees.

They are careful not to feed her.

But rumor spreads of the beauty in the woods, a woman of sculptured perfection. They say she sleeps without waking, for who would come to the dark wood at night? Who would venture close enough to see the empty bier? Some risks, even the most foolhardy of princes would not venture.

Princes are bolder by daylight, though, even the thin, starved light of the winter sun. One comes at last in search of the beauty in the woods, and finds her.

Drunk on the wine of tales, he does not heed the signs of warning. The twisted symbols carved into the sides of the bier escape his notice. The chill of her flesh, he attributes to nothing more than the bitter air. The tales say that the creatures of the forest keep her company, and they are right — but these are no innocent songbirds, making music for the sleeper. The eyes that watch from the trees are yellow and cruel, and their music is laughter, dark whispers, malice.

The prince, seeing none of this, bends to kiss her.

The fire of his touch burns her frozen flesh. She awakes with a scream, sees daylight for the first time. It drives her mad with its brilliance. Sapphire eyes blinded, she lashes out with an animal’s instinct, finds sustenance, feeds.

Bones and bloody scraps of cloth are the only sign of the prince, when she is done.

Hot blood seethes through her cold, dead flesh. It flows over the stone of the bier, coats the symbols carved into its sides. In their cavern home, her masters wake and realize what has happened. They hasten to their work, barricading the entrance, chanting spells to keep her from their door.

She does not seek them, though — not yet. Another target draws her thoughts.

Her entourage of creatures follows her through the wood, whispering and laughing to themselves. Ravens, wolves, scavengers of all kinds trail at her heels, while around them the winter vegetation withers into true death at her passing.

At the castle, her approach is felt as a freezing wind, that knifes through even the most tightly-barred window, the warmest cloak.

The fire in the queen’s chamber has been built to a roaring blaze, but even that is not enough. The queen huddles and shivers before it, calling desperately for more wood. Her stolen beauty is haggard in the struggling light, and the fire dies ever downward, flames shrinking to nothingness at the killing pressure of the cold.

The door opens at last, but the visitor is not a servant bringing wood.

The last flicker of flame shrivels into ash.

In the near-darkness of the chamber, the princess shines with an icy light. The queen cannot look away as she approaches. Her beauty has become an unearthly thing, greater than ever it was in life. But cold, so cold . . . .

The princess’ lips curve in a smile, gleaming with the redness of the bloody flesh that forms them. A moment later, the color fades from the queen’s mouth, leaving her blue and shaking. Next the skin, growing wrinkled and spotted once more. Then the hair, withering into brittle greyness. Strands of it drift to the floor like dying leaves.

Then the pain begins.

Her screams echo through the frozen darkness of the castle, where the servants huddle in fear. The huntsman hears his queen, but does not move; his loyalty cannot make him face the horror that has come.

Alone now in the upstairs chamber, with only the shadows and the remnants of what was once the queen for company, the princess raises the bloody heart to her lips. Her sharp teeth tear into it, blood staining her snow-white skin, and then it is gone. She licks her flesh clean, and smiles once more.

No blood, however hot, can remove the coldness from her now. But she hungers for it, and goes in search of more. 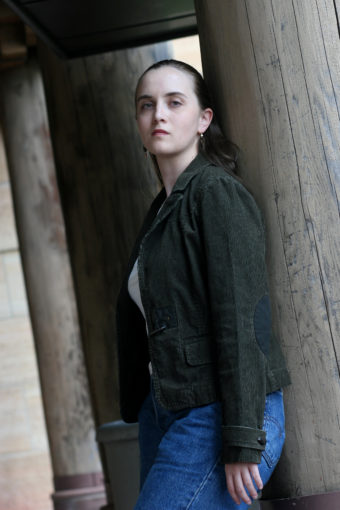 Marie Brennan is a former anthropologist and folklorist who shamelessly pillages her academic fields for material. She most recently misapplied her professors’ hard work to the short novel Driftwood and Turning Darkness Into Light, a sequel to the Hugo Award-nominated Victorian adventure series The Memoirs of Lady Trent. The first book of that series, A Natural History of Dragons, was a finalist for the World Fantasy Award. Her other works include the Doppelganger duology, the urban fantasy Wilders series, the Onyx Court historical fantasies, the Varekai novellas, and nearly sixty short stories, as well as the New Worlds series of worldbuilding guides. Together with Alyc Helms as M.A. Carrick, she is the author of the upcoming Rook and Rose epic fantasy trilogy, beginning with The Mask of Mirrors in January 2021. For more information, visit swantower.com, Twitter @swan_tower, or her Patreon. For more information, visit www.swantower.com or her Patreon at https://www.patreon.com/swan_tower.