The Stars and the Rain Emily McCosh

It rains the day my brother arrives. He steps onto Junian soil with a limp less prominent than the one I remember from childhood. And he just stands there, for a long moment, looking simultaneously lost and found. Getting soaked through.

The rain here is clear as anywhere but likes to awaken the dormant algae growing invisible on every surface. The shuttle-pad is already shimmering purple when my baby brother gets his boots wet. I stand inside the shuttleport, watching Isaac slosh about like the ten-year-old he was when I left. He uses his cane to swirl the water while I try a little not to laugh, and mostly not to cry.

I jumped star systems when I was nineteen. Jun was exotic and licking its wounds from the recent ending of a war. When my girlfriends convinced me to go, I hugged little Isaac goodbye as he stood on shaky legs, smiling up at me. Waved to my parents and escaped my own personal war. My friends stayed a week. I stayed much longer.

Armed with my camera and a splinter of high-school journalism experience, I traveled every mile of the little planet I could. I talked face-to-face with Isaac almost every day on my tablet, then our parents would get on and talk. They’d tell me what the doctors were saying. That he wouldn’t last more than a few more months.

They kept saying this every couple of months.

When the largest news organization on Jun saw my collection of post-war photos and offered me a job, just me and my camera, I took it.

The first picture I took was in a bathroom stall. Someone had scratched words into the faux wood grains of the door. Some quote about love. I had to look it up—to find it was by some long-dead Earthling author—then sent the picture to Isaac.

I didn’t ask my parent’s permission before I took the job. But I asked my brother’s.

We started communicating in this way. A picture sent across the stars. Sometimes with a note scribbled electronically along the bottom. I printed his on precious, rare paper, so I could touch something he gave me. Tacked my wall with his pictures. Not the ones I took that won me awards.

We never discussed them when we spoke face-to-face, those times when our parents would give the doctor’s verdicts. I was steadily starting to believe the people who thought they knew the most really knew the least.

I was steadily starting to fear I never went home because I was afraid I’d see him die.

When he was fourteen, he sent me a photo of his doctor’s framed M.D.

Scribbled along the bottom: When do you think they’ll give up and just tell me they don’t know anything? That I’ll live as long as I damn well want to?

At fifteen, he sent his perfect grades in school.

On the bottom: I am the god of wisdom.

When I was twenty-four, I sent a picture of my boyfriend, posed atop a mountain after a day-long hike.

What do you think?

His returning picture was of our parents together, cooking a familiar meal.

He’s not good enough for you.

I rolled my eyes when I got it. Printed and tacked it on my wall.

A few months later, it turned out he was right.

When he was seventeen (I was twenty-five), I sent him three. First: a sunset over Jun’s sun-orange-tinted turquoise sea. Second: a ghost-town left by the war, with shattered stone buildings and roughened decrepit wood houses. Third: a ten-year-old boy from the most secluded village on the planet, dressed in blue-dyed papery pants, dripping with rain that puddled purple around his bare feet.

On the bottom of the third, I wrote: Bet you aren’t this little anymore.

On the second: Not our family. Not you and me.

On the first: You need to be here.

When he was nineteen, a picture of our childhood house where he still lived. It was twilight, and hardly visible. My memories of that place weren’t strong as they should’ve been.

Yes, come be with me. I wrote on what I sent in return. A copy of the oldest photo I had of him—when he was four-years-old.

Why? Because if this war-torn planet I’ve lived on these years can be so brave, then so can I. Because I thought I ran away the first time. Because I thought I was so afraid of watching you die I didn’t watch you grow up. Because I miss you every day. And I’m still afraid, but I need you here. And I am so, so sorry.

Instead, I wrote a piece of that quote I first sent him off a trashy bathroom wall: “Love is a growing up.”

Isaac sees me when I leave the shuttleport, getting my sandals wet with purple-algae-rainwater. We stand, awkward, grinning like idiots, him leaning on the cane that helps his twenty-year-old self walk, me with my fingers wringing my shirt.

“I don’t actually remember saying you could grow this much,” I say because he’s tall. He is so tall. My head reaches his chest. Lanky too, like a cheetah pup growing into itself. He smiles and blushes. Swishes the water at his feet.

He says, “You’re pretty as I remember.”

I laugh and hug him tightly though it still rains, steadying him when he wobbles. “I’m sorry,” I tell him and feel some of the fear in me ease as he clings tighter, showing me the strength in his arms.

When he leans back, he’s smiling brighter than I’ve ever seen.

I take up my camera and snap his picture in the rain. 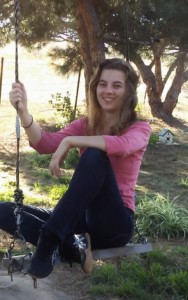 Emily McCosh is a dedicated daydreamer (read: storywriter), and has no self-control when it comes to graphic design, cheesy action movies, and the smell of new books. The stories she writes mainly consist of outer space or high fantasy, and her characters need to learn some manners. She is pleasantly surprised to say that her other daydreams can be found in such places as Abyss & Apex (forthcoming), Galaxy’s Edge, Nature: Futures, and Daily Science Fiction, among others.

She occasionally chatters about writing on her blog, makes snarky remarks and posts too many GIFs on Facebook and Twitter, and wouldn’t mind a wave hello on any of these.