When Irina says for the gazillionth time that she’s going to escape, we coax her away from the barred window. We smooth her hair and shush her, but we don’t touch the shiny laminate that coats her arms.

We don’t know if Irina can feel anything underneath that brittle gloss like a nail-polish top coat. If we asked, she’d say Eso no es de la incumbencia de ustedes, which basically means, nunya.

With Irina, we’ve learned to wait and see. For three months we thought she was a crybaby, until we overheard the Bulgarian nurse telling the nurse with a Texas-shaped birthmark on her cheek that Irina can only sweat from her eyes.

Rajesh peers up at Irina like she’s a card castle about to topple. “Iron bars, Irina.”

Irina gets in his face, and Rajesh backs up. “You think they’ll let us out, hermanito? You like our little cage?”

Rajesh is silent as Irina turns to the rest of us. “You’re really just going to wait.”

“Not fair,” Rachel calls in a faint underwater voice from the window onto her special room. “Hitomi can’t even move. You’d just leave us?”

Hitomi is trying to sit up in bed, but her eyes squinch tight and her skin ripples frantically over the second brain growing next to her heart.

The door rattles, opens, and a high-heeled foot appears in the gap, followed by Bulgaria, grunting as she swings herself inside with our lunch trays.

When we’re eating, we’re almost normal. The sparks from Rajesh’s fingers retreat to a soft glow in his fingernail moons. Hitomi’s rippling skin dies down like water recovering from a breeze as Bulgaria spoons hot pozole into her mouth. When Rachel bends to say her mealtime prayer, her many-threaded green iris disappears from the window. When she eats and no one’s watching, Rachel isn’t a giantess. She’s just a hungry thirteen-year-old girl.

Irina will now lie in her bed, staring at the gauzy curtains as she crunches her chicharron chips. The food is good here. We don’t give a shit. We’re four of hundreds Big Agro has stashed all over the world.

After lunch we usually play checkers and trade stories until Bulgaria comes again to ask us the questions: How tired are you, on a scale from 1-10? Do you have any control over what makes you different today? Any vomiting in the last 24 hours?

Today is different. After Bulgaria leaves, the streets outside begin to boil with farty brass music. A pleasant hysteria made of children’s squealing and vendors’ long call builds until the party might as well be in our room. No checkers today, no stories. Eyes closed we recline in our beds, listening to the children beating their drums in the heat for the Virgin of Guadalupe.

At three, Irina jumps up. Her billowing gown transforms her for a moment into a Strawberry Queen, the girl chosen to ride in the Irapuato parade every year. Irina says she was the favorite to be Irapuato’s next queen, until her skin started flaking scales like micah the winter before she turned fifteen. When she got into a car crash with her boyfriend outside of Nogales, the policeman made a call. Before I could even try on the elbow length gloves, Irina said.

“I love you all,” Irina says, watching Hitomi, who stares calmly back. “I do. But I’m going to trick that guard who can’t grow a mustache.”

“I bet he’d like to know if I’m glossed all over,” Irina hisses. Hitomi tches, but Rachel snorts her milk, spattering her window. Irina minces a funny dance, letting the sun catch her prismatic skin.

“I told you,” Rajesh pleads, turning to of each of us, fixing our eyes. “The last time the suits came they were thinking, PR campaign. I had a headstorm; I heard. Poster children, they thought! I’m close to pyrokinesis–”

“Pyrokinesis?” Irina laughs. “You’re full of shit, puta madre.” Back in her bed with her knees pulled up, Irina turns away. “I have to know,” she mutters, “if I’m special, or if I’m just sick.”

We have nothing to say to that. We all want to know the same thing. After all. Hitomi has known the cold stars over Fukushima. Rachel shot up until she towered above her father’s Iowa fields of Ready Gro Grain, and Rajesh swam with his brothers in the stinging brown waters of Agra. Irina has picked in the toxic Irapuato strawberry fields, but was never the Strawberry Queen.

We fall asleep in the blue night to the streetlamps pooling on the floor below the window and the wanton children beating their drums into the dark.

The next morning, they wake us: Bulgaria, Birthmark, a brick-jawed doctor, and three nurses we’ve never seen. They shriek and skitter around the room while the doctor glares. Rouged lips open and shut. They grab us by the fronts of our gowns, demanding answers.

At the window, the sunrise spreads a grin along Rajesh’s cheeks. He stares at the pavement below, covered in streamers from the Virgin’s celebration like a plate of painted noodles. Over them is a spray of gold powder in the outline of a girl.

Maybe our differences will gradually weaken and fade, as Irina’s must have done until she could shatter her patina with one good jump. Maybe Hitomi’s second brain will shrink. Rachel will not, but she’ll play pro ball somewhere. Rajesh’s useless amperage will quiver and die, all of this just a phase, like acne or poltergeists.

Deep in our winded hearts, we know that even if we become normal again, they’ll never let us go.

Until the nurses come back, we’ll tell each other that Irina’s red cheeks under their gloss made her look like a wooden angel in a basilica painting. Now, somewhere out there, Irina just looks like a girl. 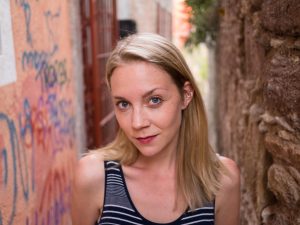 Sarah Beaudette is a graduate of Wellesley College, a Pacific Northwest native, and a nomad currently based in Mexico. She spends most of her time procrastinating on The Novel by mispronouncing bakery orders, swilling scalding coffee, and exploring enchanted alleys with her husband and two small sons. Her family loves the neighborhood stray cats and dogs–they take turns warning each other to “watchoutforthatpoop” faster than John Wayne could draw his gun. Read more of her at http://www.sarahbeaudette.com and in places like The Arcanist, Monkeybicycle, and NewMyths.com.