The Truffles of Mars Jeremy Lichtman

“We cannot make an omelet without mushrooms,” said Anton Antov.

Down in the bazaar, there were locally grown staples, stacked alongside pricey imports. Eggs were plentiful, there being no shortage of chickens on Mars. Herbs, of two dozen varieties, grown in a little greenhouse on the other side of the atmospheric plant. Tiny, shrink-wrapped, fearfully expensive packages of dill, parsley and basil, hauled all the way across the inner solar system, losing much of their natural flavor along the way. No mushrooms.

“I can order them for you,” said the manager. They sat in his office, which was cantilevered above the ground level of the market dome. Large picture windows provided an exquisite view of the produce section. “The current transport is already on its way, so we’re talking about the one after that, if it isn’t full already. I can get you a small package of mushrooms in about two years.”

The sous chef, a patient, and normally genial man named Raul, winced. “Sardar,” he said, “I can’t tell him that.” He scratched at his thinning hair with his hand.

“I don’t understand why you still work for that tyrant,” said Sardar. Similar occurrences happened regularly, and the two were well-acquainted. “Why don’t you quit?”

“He’s not that bad. He just has high standards. Which I happen to appreciate,” said Raul. “Where else can a person learn cooking here? He studied in Europe.”

This was true, both literally and figuratively. There was only one Anton Antov on Mars, and few options for the hungry aside from making their own meals, eating the invariably tasteless cafeteria food, or reducing their teeth on surplus MREs. The petty tyranny of the sole formally-trained chef on Mars was just part of the astronomical price to be paid.

In the tunnels near the atmospheric plant, an assistant chef named Nisha, had an idea. She had obtained a small electronic hygrometer, used for measuring humidity, and had cajoled a friend at the municipal planning office into providing her with a list of recently repaired leaks.

The atmospheric plant, a sprawling industrial complex that produced oxygen from a variety of source materials, and stripped excess carbon dioxide from the air, also had equipment to keep humidity at equilibrium, and a complicated network of insulated ducts, carrying air and water in both directions, branched out through underground tunnels to the rest of the settlement.

At each of the locations on her list, Nisha wiped a finger, delicately, on the piping to check for moisture, took a quick reading on the monitor, and then crouched down to check for fungi. This was, as one might imagine, a dirty, sweaty job.

“I’m going to send you a snapshot,” she said.

“Nope,” said Anton, glancing at the screen of his phone.

“Ewww,” said Anton. “Really? Behind that filthy pipe? You need to tell maintenance about that.”

She sighed. “I’ll try something else,” she said.

“No,” said the farmer. He wore a neatly pressed white lab coat, rather than denim overalls, and had a surgical mask hanging loosely around his neck.

“Do we really need to get into this?” said the farmer. “No, just no. And don’t look at me like that.”

“You are not borrowing a pig,” said the farmer.

“I’ll owe you a big favor,” said Raul, with a wheedling tone.

“For one thing, they need to be specially trained for that,” said the farmer. “Neither of us know how to do that.”

Raul opened his mouth to speak, but the farmer held up a finger.

“They like to dig,” said the farmer. “Do you really want a pig rooting around, making holes in things? The air out there isn’t exactly breathable, if you know what I mean? You enjoy sniffing carbon dioxide?”

Anton Antov weighed the truffle in his hand. “How?” he asked. “How did you obtain this?”

“There’s an experimental hazel grove,” said Raul. He checked off carefully memorized points on his fingers. “They grow them in imported lime, in order to keep the soil alkali, and then coppice them–“

“That means cut them down to stumps every year,” said Nisha. “So they don’t get too big for the greenhouse.”

“Yes,” said Raul. “It turns out that truffles can potentially grow in the roots of hazelnut trees. The spores must have been accidentally imported a few years ago.”

“How did you find it?” asked Anton.

“I borrowed a friend’s dog,” said Nisha. “Training it turned out to be easier than expected. There was one tiny bottle of synthetic truffle oil for sale down in the market, and apparently the smell is almost exactly the same.”

Anton sniffed the truffle deeply, and smiled, grimly. “This will do for the pasta salad, and the eggs.”

His tired assistants began to relax.

“However,” Anton said, “We are running low on olive oil.” 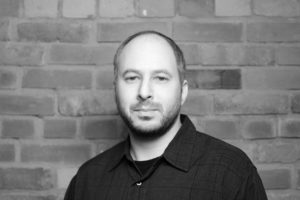 Jeremy’s stories have been featured in several anthologies, including “Visions of the Future” from the Lifeboat Foundation. He was a round-of-ten finalist for the Amazing Stories inaugural Gernsback Contest. He writes from somewhere vaguely in the vicinity of Toronto, Canada. You can find more of his stories at www.jeremylichtman.com.