This is the Duke’s fifth wedding.  All within the last three months, all to the same woman, Larian den Combasta.  Yes, those Combastas.  Marrying into a wealthy banking family is a smart move for Duke Diere, my boss.  Add in the fact that she’s beautiful, sweet-tempered, and well-read, and the match is a win for everybody.

Now if they could just complete the stupid ceremony without her up and vanishing.

They’re at that part now, the troublesome bit.  They’re holding hands, a brocaded ribbon wrapped around their wrists to bind them together.  The bishop has finished all his chants, filled the air with sweet incense, brought forth the rings, and it’s vowing time.  Larian has such a lovely voice.  She was trained for the opera, you know.  She played the lead in Dal Rosien for His Holiness himself when she was only fourteen; blew the lid off the place.

“…through grace and malice,” she’s saying, the traditional vows, “through storm and stillness, I swear to hold myself for you and your house alone.”

And just like that, she’s gone.  Diere is left holding empty air, the fasting ribbon hanging limp around his wrist alone.  Only a slight popping sound signals her disappearance.

The crowd groans, such as it is; the basilica isn’t even a quarter full.  The guests lost most of their enthusiasm after a few false starts.  The only people who showed this time are those who are desperate for favor with the Dieres or Combastas.

“Damn!” the Duke explodes.  He turns to find me standing at the back of the room.  “Michalio…”

I don’t need more order than that; I’m the commodat for a reason.  I salute him and stalk from the room.

It’s a long, hard ride to the mountaintop castle of Quesson Yvoire, sorcerus intrepidus and former flame of – you guessed it – Larian den Combasta.  The way I heard it, Larian saw Quesson use his magic to heal a three-legged dog years ago and fell for him instantly, wooed by a big raw heart.  No one knows why she left him; poor taste in music, maybe?

I find him in the library, sheepishly sipping on a snifter of brandy while Larian stares daggers at him from across the room.  A shout dies on Larian’s lips as the creak of the door announces me.

“I know, I know,” Quesson demures. “I really thought I had it this time.” Larian rolls her eyes.

“Five times, sorcerer,” I grate.  “You remain un-hanged only because the Duke believes you are wrestling with a troublesome enchantment.  That belief is running out.”

“As is my patience,” Larian adds.  “I have begged my betrothed to spare you for my fond memories, and yet this frustration persists.”

“What am I to do?” Quesson refills his brandy.  “I designed the charm of recall to be unbreakable beyond even the grave.  Its triggers are quite firm as stone, I’m afraid.  Swearing yourself to another being chief among them.”

“I know exactly how great a magician you are, Quesson.”  Larian’s gesture takes in the library: books and scrolls by the hundred, a half-finished manuscript of pulsing glyphs, a trio of crystal orbs that circle slowly overhead, filled with starlight.  “I have seen you end ‘unbreakable’ enchantments before.”

A smirk creeps over his face.  “So you have.  You remember that summer, in the Tiger Hills…”

“I will not reminisce about romance long past while my future husband waits upon the altar.  Have you no sense?”

“Our good times need not linger in the past.”  He looks half a child, his eyes cast sullen to the floor.

Larian glides to Quesson’s chair in one smooth motion, her skirts blustering around her.  “Quesson, look at me,” she kneels.  “I am not some imp that can be leashed to your service with clever potions.”

“Perhaps I only need to find the right potion.”  Quesson’s bitter tone brings a lemon grimace to my face.  “If my magic can bring your body here, who is to say that your heart cannot be conjured as well?”

My hand tightens on the hilt of my sword.  Larian reels back, and for a moment she looks to slap Quesson.  “You would poison my heart with compulsion?  What vileness!  You placed your charm of recall on my brow for my protection, but now my greatest danger is you.”

Quesson recoils, the brandy forgotten in his hand.  “I would never bring you to harm.”

Larian clasps his hand in hers, the fullness of her gentle spirit hammering him into compassion.  “You have ripped me from my home, from my family, threatened the freedom of my own mind.  What am I to feel for you, if not fear?  Let me go, and you may yet love another.  Keep me leashed, and your charms will wither on the vine.”

Quesson stills himself for a moment, then stands, bringing Larian to her feet as well.  One of the glowing crystals overhead descends into his outstretched hand.  I draw my sword, fearful of some treachery, but Larian stills me with a wave.  I hold my charge, my steel still bare.

The room pulses. Phantom birds sing sweetly in the distance.  Man and woman both grasp the power crystal, glowing as Quesson intones in the ancient language of magic.  I’m struck by the tableaux, filled with the memory of the church I left behind; all we need is a priest to complete the image.

There is a sound like a broken bell, and the glow around Larian shatters.  The crystal in their hands is gone, the room dimmer for it.

Larian takes an experimental breath, smiles.  “Thank you, Quesson.”  I’ve never heard anyone sound as genuine.  “I promise, you are not doomed to a life of pining.  You will find another.”

“Such a feat would truly be magic,” she smiles.  “If only you knew a good sorcerer.” 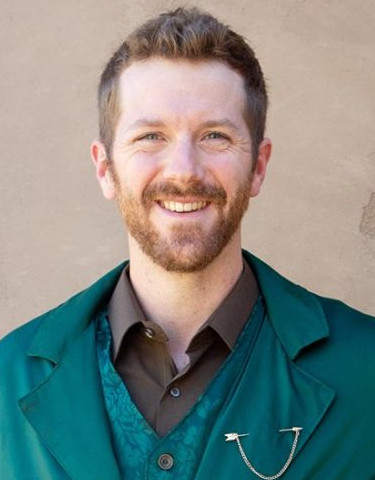 William Paul Jones is either a sci-fi and fantasy author or two golden retrievers wearing a fedora and overcoat so they can get into R-rated movies, it’s hard to say which. He is a graduate of UNC Chapel Hill and currently lives in Los Angeles where he works various movie production jobs. He is attended by one hilarious wife, a pair of insane dogs, and whichever new best friend he happens to run into at Burning Man. He likes wizardry a great deal, plays the guitar passably well, and is usually filled with roasted chicken and quinoa.