“It’s hot,” the saxophone player says with a shrug. “Right?”

The bass player nods. He showed up in a Metallica t-shirt.

The saxophone player wears short sleeves under a jacket with the lining cut out. He told me so. I’m wearing what we always wore to wedding gigs: a tuxedo jacket with velvet lapels over a long sleeve white shirt with a pleated front. Even though I’m a girl.

Marvin comes back to the bandstand with four perspiring bottles of water.

Marvin and I are the only ones left from the original band, but he shed his tuxedo jacket the moment he got here.

Sure, it’s hot. But it’s not Fever hot like it was last year.

We play ‘C Jam Blues’ quietly to warm up the crowd, but we play it in the key of F, not C like it says in the name, because of the saxophone kid. Just out of school, he’s not much younger than me, at least in years. He’s pale and has no Fever scars, and he plays like someone will steal any notes he doesn’t use during this song. The bass player is blissfully workmanlike, steady. I’m still out of shape, so I play reserved and small like I prefer it that way.

Playing small, I don’t get noticed as much. I always got looks, a girl playing trumpet in a jazz combo, even before Fever. They wanted to watch what I could do, and I would show them, command their attention with a huge sound over long phrases. Nowadays, they watch the dark scars on the backs of my hands disappear into my sleeves and clap with forced enthusiasm for the poor girl with the tiny sound who lived through Fever.

When we finish, the saxophone kid sucks on his mouthpiece and winks at me.

“Cut that out right now,” I say. I don’t even want him to be here, so leering at me is out.

We get a request for ‘St. Thomas,’ but saxophone kid doesn’t know it. He knows who Sonny Rollins is, the saxophone player who wrote it, but that’s all. Just a name, nothing more.

I miss the old band. We were tight. Together. Always surprising each other. So when Brandon got Fever, Joe and I got it—and Marvin kept clear like he was making a point. Brandon and Joe died days apart. If they’d lived another three weeks, they could have had the retroviral drug that saved the rest of us. They’d be scarred like me, but they’d be alive.

Two women with corsages as big as their faces come over. One tells us, “The bride will be here any moment.” Then they linger behind their corsages in front of the bandstand. The other says, “You know, I actually liked her dress.”

“I know. It’s like nothing happened, like bridal shops just brought out Fever dresses because it was just the in thing this year.”

Fever dresses? I can imagine. Thick and heavy, with gloves. And a heavy veil, of course, to hide a bride’s scars. I hope she’s miserable under all that in this heat.

My own scars run up my arms, but not like an addict’s angry blood vessels. They follow no discernible anatomical course as they wind over my body like dark vines—like Fever, which spread in no discernible pattern. One day you were fine, the next day your brain was boiling in your head. If you survived, you were marked, always starting with your hands, then arms, shoulders. The longer Fever had you, the more you were changed. My scars climb past my shoulders, wrap across my chest between my breasts, snake around my ribs on the left side and reach for the small of my back.

A murmur passes through the crowd, and folks jockey for a view of the bride. Now that I know no one is looking at me, I want to leave.

Before I can move, the saxophone kid says, “Here comes the bride.”

I want to hit him.

Then I see her, and she doesn’t look like any bride I’ve ever seen. Her scars are worse than mine. Hands, arms, shoulders, chest, neck, face and up into her hair—and probably everywhere her dress covers, too. How she survived Fever that long is its own miracle. But while her dress covers her scars, it doesn’t conceal them. It’s white, and it’s covered in lace—but dark lace in Fever scars’ green-black color.

It’s hard to know where Fever scars stop and lace starts. Dark lines flow up her arms and spill down the bodice, into the skirt where they spread out like roots. Her hair is down, and her scars climb her face and onto her scalp, where they disappear into wavy brown hair streaked with dark green-black.
Fever has made her exquisite. She has their attention, wants it like any bride.

I can’t play. The saxophone kid does a decent solo “Stardust” over Marvin and the bass player with the Metallica t-shirt, while I sit in a folding chair beside the bass amp and watch the bride smile at her husband.

When the first dance is done, a corsage lady comes back and asks the saxophone kid to play something happy while they get pictures of the cake being cut. I take off my jacket and roll up my sleeves, then I dig in my gig bag, find my fake book and turn to the page with ‘St. Thomas.’ I put it on the stand for the saxophone kid.

He nods, looking from me to the music and back. I have his attention, and for the first time today, I don’t want to hit him. 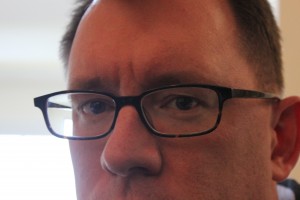 John League holds two degrees in music performance, an impressive financial professional credential and (probably) the record for most visits to the Pohick Regional Branch of the Fairfax County Library in a single year—though the three gentlemen who gather there to play Go almost every morning are a constant threat. “The Wedding Gig” is his first published work of fiction.