The Yankee at the Sitting-Up Clayton Kroh

The Yankee comes in the back, brushing by my casket in his creased wool, smelling like he’d just swum in his leather-and-pine cologne.  He fishes his way through the mourners who stand around fanning away the July heat and takes up a spot, nonchalant-like, along the back wall, opposite where my body’s laid out.  Next to him, our big mantle mirror faces the wall as do the other mirrors in the house.  Catching sight of a coffin in a mirror bodes nothing but ill for the looker.

The Yankee draws narrow-eyed glances.  At a Southern man’s funeral he can’t pass without notice, particularly by the dead man.

Auda, my wife, moves quick to close the door to the kitchen before Clovis, her favorite calico and my enemy in life, can get into the main room.  Cats are Satan’s minions.  Given half a chance, they’ll jump in a casket and steal the soul of the recently departed.  I imagine old Clovis sitting on the other side of the door, full of sneak and waiting for a chance at payback for all the swift kicks I’ve given him with my brogans when Auda’s back was turned.

Auda’s jaw is set, her mouth pulled sour-serious and straight as a plumb line across her face.  She’s holding in her misery.  I feel for her.  After the hullabaloo of my sitting-up, and then the funeral, she’ll be all by herself.

Dutiful Auda.  She was pretty in her day.  The first time ever I saw her, on my way to pull corn on the Johnson’s farm, I’d been moved to whistle in appreciation.  Her red hair danced like a brushfire above her mamma’s wash as she hung it on the line to dry.  She’d scowled at first, but then winked at me, her eye sharp and shiny like a needle in a haystack, her grin sharp like one, too.  There’s no blessing greater than the love of a Southern woman.  Ain’t no man worthy of it, neither.  You got to be regularly thankful, but in the end, you always fall short of living up.  And I’ll be the first to hold my hand up there.

Folks move up and peek into my casket, then depart to the left where the kitchen table has been drug out into the living room.  On it sits a slew of casseroles, biscuits, some slaw, ham, mashed taters, and redeye gravy.  A sweet potato pie sets in amongst it all.

One of Auda’s friends sits at the head of the casket, flyflap at the ready.  Her lips are sucked in on account of her dingy false teeth soaking in a glass under her folding chair.  I look down at myself for the first time.  The casket is draped in yellow veils to keep away the summer flies.  A fat black housefly hangs by its entrails from the veil above my ripening form.

I don’t appear nothing like how I remember.  It’s like someone pulled a plug out of me and I deflated down to my bones.  Two heavy buffalo nickels sit atop my closed eyes.

I got to admit, I never reckoned sitting-ups was much good for anything.  I figured the spirit woulda took off by this point.  Truth be told, I’m a bit fidgety standing around here waiting for something–I don’t know what–to happen.

Thinking of death puts me in the mind of the Yankee again, so I glance about for him.  He’s still in the back, now standing next to my empty rocking chair, an idle hand tipping it back and forth.  Folks have shied away from him.  Rocking an empty rocking chair is some serious bad luck, like spinning a chair on one leg or opening your pocket knife and letting someone else close it.

All of a sudden, a racket busts out from over near the buffet, and who do I see but Delma Maynor.  She’s half on the floor, legs buckled under her, her face a beet and temples flaring with veins, just a wailing.  “Wilbur!” she hollers.  “Oh Wilbur, why?  Why?”

Delma is my sister-in-law, wife to my recently deceased brother Percy.  A fine woman with long legs that you can work like oars.  Ol’ Percy never truly appreciated her.  Delma didn’t make half this much of a fuss at Percy’s sitting-up.  Amongst the mourners whispers spout like air leaks from a doodlebug tire.

Quick as a shot, Auda is behind her, her strong arms hooked underneath Delma’s.  She roughly puts Delma on her feet, who promptly starts in on another wail.  The woman with the flyflap smacks her lips and says what I figure everyone’s thinking:  “Lord, she’s just the sister-in-law.”

Before I know what’s what, the Yankee is there behind Auda to help.  His pale hand slides its way all-too familiarly to the small of my wife’s back.  She arches into it, just for a second, making a curve I ain’t seen in many years.  The plumb line snaps, and a smile whips across her lips.  Auda’s eyes shine like the needles I once knew, but they pierce everything I thought I’d known.

The Yankee lifts blubbering Delma and kicks the kitchen door open to carry her out the back.  At that moment, Clovis sees his chance and bolts.  The cat leaps, pulling down the veils over my body and lands in my casket.  He knocks the coins off my eyes and they fly open, and from those assembled come gasps and much uncomfortable shuffling. 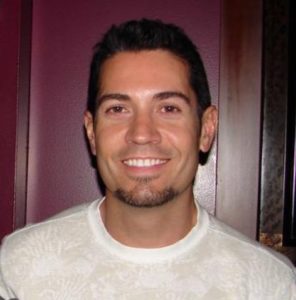 Clayton Kroh is a writer and freelance editor living near Seattle. A gaming industry veteran, he has written for titles such as EverQuest, Star Wars Galaxies, PlanetSide, and Magic: The Gathering. His short fiction has appeared in Weird Tales Magazine, Penumbra, and DailyMTG.com. You can find him online at claytonkroh.com, and on Twitter as @claytonkroh.