An Editorial About Mothers

Things That Could Go Wrong in Idaho

Things Not to Forget

Things That Could Go Wrong in Idaho Kaely Horton

By the time they crossed the state line, Deb Burkett’s daughter, Linnea, had just about perfected her list of Things That Could Go Wrong in Wyoming. This was not to be confused with her list of Things That Could Go Wrong in North Dakota (car keys fallen down drop toilet, car died after crunching across gravel road) or Things That Could Go Wrong in Montana (rogue bison attack, car flown off switchback, tent chomped in half by bear hunting for the Jolly Rancher in Nathan’s coat pocket). When they spent the afternoon in Yellowstone, Linnea’s list suddenly got a lot longer. As eight-year-old Nathan clomped across the boardwalks, ten-year-old Linnea hung back, staring at the electric green rimming the bubbling pools of the hot springs.

“Linnea,” Deb said, holding up the camera, “how about a smile?”

Linnea shook her head slowly. She never took her eyes off the pools.

“Ah—that’s a no,” she said quickly. Nathan had tried to stand on the bottom rung of the fence. Linnea eyed her brother with nostril-flaring dismay.

“The fence could collapse,” Linnea said. “A hot geyser could shoot up really high. The boards under our feet could break and then our shoes would melt and we would die.”

“Well, aren’t you cheery today,” Deb said. Linnea pressed chapped lips together and stared at her with raised eyebrows. Deb got the distinct feeling her daughter thought she was hopelessly irresponsible. She softened her tone, realizing a change in strategy was needed. “It’s okay, sweetie. Those things aren’t going to happen.”

Linnea ignored her. She stood near the back of the boardwalk as if rooted, blocking traffic, hands stuffed in denim pockets, brown tendrils curled around her ears. Every part of her looked solid except her eyes, which were shallow and distracted as she stared ahead.

Several yards beyond the boardwalk, water bubbled thickly from a rust-stained slope. Steam billowed like cotton up the hillside, milky white obscuring the green. Deb wasn’t convinced Linnea could even see it.

“You can come a little closer. You might not get to see this again.”

“If I get too close, it’ll be the last thing I’ll ever see.”

Which was exactly what Deb wanted to say as well. Her daughter seemed to have become afraid of everything overnight, and Deb was at a loss as to how to handle it. She’d tried comforting, she’d tried downplaying, she’d tried taking seriously and making light of. Most recently, she’d tried joking with Linnea, which had gotten her exactly nowhere. In every situation, Linnea surveyed her surroundings and immediately identified the dangers, and she lost no time in sharing them with everyone around her, describing the family’s impending doom with deadpan relentless calm. If she had to listen to her daughter’s grim prophecies for four more days, Deb felt liable to lose her mind.

“This whole boardwalk could fall apart,” Linnea announced, as if she were a contractor at a construction site.

“Yeah, it will,” Linnea said. “Everything falls apart sometime.”

Deb opened her mouth to answer, then closed it. The geyser gurgled behind her, a warning, an otherworldly lament, and she felt a sudden stab of dismay. There was no Band-Aid, no platitude, no lullaby that could soothe a ten-year-old who understood that things fell apart.

She wasn’t equipped to deal with this—but there was Linnea with feet planted on the boardwalk, waiting for an answer. Deb was the parent. She had to find the right thing to say.

She moved closer to her daughter until they were standing side by side, arms almost touching. “I’m sorry,” Deb said. “You’re right. Things do fall apart.”

Nearby, Nathan blew raspberries in quick succession, as if imitating the sound of the mud pots.

“But not this boardwalk. Not today.”

Linnea’s eyes met Deb’s. Deb forced herself not to look away. There could be no making light of this, no hint of sarcasm or humor in her face. She’d pushed aside Linnea’s fear long enough, pretended not to know where it came from. It was time to be brave.

Linnea moved forward—one, two, three steps. She craned her neck to see the white drifting up the slope.

“Okay,” she whispered, and backed away.

It occurred to Deb that okay was a word that could mean many things. She didn’t know what it meant to Linnea. What she did know was that they made it into Idaho that evening and out of it the next day, and if Linnea made a list of Things That Could Go Wrong in Idaho, Deb never heard about it. She dared to hope that she might still get a picture of Linnea Smiling. She wouldn’t even need an entire photo series. As a starting point, just one picture would do. 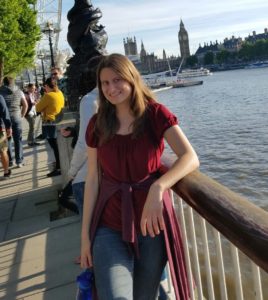 Kaely Horton got hooked on craft classes at Oregon State University and received her MFA from the University of New Hampshire. Her work has appeared in Smokelong Quarterly, Stonecoast Review, Isthmus, Citron Review, Fourth River: Tributaries, and others. This is her second time publishing with Flash Fiction Online. A Utah native and chronic nomad, she divides her time between the mountains of Salt Lake and the fog of the Oregon Coast. You can find her on Twitter @kaely_horton.