K’loth bends his face to the basin and washes. The first washing of the day is for the Gods. One is the Goddess. Two is the God. Three is the Shadow. The water drips from pale blue tentacles above his mouth that move in the motions of prayers he has said every day since attaining his majority.

Three is a sacred number.

K’loth bends a second time. The second washing is for family. One is the ancestors. Two is the family of today, though they are long dead. Three is the descendants he will never have. He prays they find peace. And forgive him.

Three is a sacred number.

K’loth reaches into the basin the third time. The third washing is for self. Past, future, present. He says no prayer for himself. There is nothing left to hope for.

He does not reach for a towel. The water of prayer must dry in its own time.

K’loth stands at the cell door, awaiting the signal. Above the cell door hang nine large black markers and nine small white markers. They show his victories. Nine and ninety wins. Nine and ninety times the God and Goddess have granted him life, and The Shadow has taken his opponents. He is the longest survivor in many seasons.

Nine is a sacred number. Three threes. Nine and Ninety is the convergence of all sacred numbers. Holy. Complete.

All know the tradition of one hundred. One hundred wins to be free. Many speak K’loth’s name in the same breath with that of Slamon of Ceti who survived one hundred bouts and became an Overlord. He now owns the lives of a dozen competitors and sits among the elite.

One hundred is not a sacred number.

At one hundred kills, K’loth would be free. At nine and ninety, he is content, but it is not his choice to fight or quit. His life belongs to his Overlord. Like the scores of other competitors in cells beside, above, and below him, the Overlords came to his homeworld many seasons past with their slim silver ships and their guns and chains. So far as K’loth knows, he is the very last of his kind. He fights when told. Sleeps and eats when allowed. Prays daily.

The cell doors open. Some competitors push and shove. Some hang their heads in despair. K’loth stands tall, sacred water still dripping from his mouth tentacles. A gang of Avids push to the front of the ration line, their red feathers bristling at the slightest touch. Others give way, letting the Avids pass. Their beaks are strong enough to crack bone, and they are quick to anger. No one wishes to be in their path.

No one but K’loth. He stands in his place and will not be moved. The Avids stop their advance. Even they do not challenge K’loth.

K’loth takes his ration to the side. White-fur is waiting for him there. K’loth has no way to make the sounds of White-fur’s language, and White-fur cannot speak the language of K’loth’s people, but they make do. They are an unusual pair. K’loth, dizzyingly tall, with blue skin and mouth tentacles, long fingers and thick, muscled legs. White-fur, half K’loth’s size, covered with thick hair. His tail and long retractable claws enable him to climb and swing. That, and the quick-acting paralytic poison in his spit, have allowed White-fur to survive two and twenty bouts in the arena.

“Last fight today,” White-fur says to K’loth in his native tongue. White-fur’s voice is high and his speech very fast. It takes K’loth a few seconds to understand each statement. “You are happy to be free, no?”

K’loth shakes his head. He holds up three fingers, then folds two of them in and hangs his head low.

“Is not three, I know. But is freedom. When free, you will be Overlord. Own three competitors. Nine competitors. More. Like my Overlord, Slamon of Ceti. Big hero.”

K’loth’s tentacle bristle at the mention of Slamon’s name. He has grown tired of the comparison. He does not understand the compulsion to own others and force them to fight, but he has no way to make White-fur comprehend his meaning, so he only eats.

After rations, it is time to prepare for the day’s battle. K’loth has been told he will fight one of the Avids today. It will be a good show. He allows the Supervisors to wash and oil his skin and dress him in armor. He chooses spear, knife, and net. Three weapons. Always three.

The gates open and K’loth steps onto the field. Sun shines on his oiled face-tentacles and glints from the metal tip of his spear. The Overlords cheer. K’loth sees Slamon of Ceti in the place of honor. Though he is seated high above the arena, K’loth sees the hatred on Slamon’s face. He has long been a unique fixture. The only competitor to survive one hundred bouts. He does not want K’loth to win.

The crowd is beyond capacity. All wait to see if K’loth will achieve his freedom.

The opposite gate opens, and K’loth prepares to face his Avid foe. But it is no Avid that steps onto the field of battle. K’loth looks again to Slamon and sees the smug satisfaction on the former slave’s face. He knows. He has manipulated the draw to put his own slave, White-fur, into this battle. Even from such a distance, K’loth can almost hear his victorious laughter.

White-fur is scared. K’loth does not have the words to comfort him, nor would he know what to say if he did.

K’loth signals that he is ready for battle to begin.

Previously published in Daily Science Fiction, 2013. Reprinted here by permission of the author. 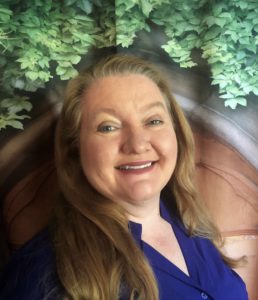 Carrie wrote her first book, about an elf named Snickerdoodle, at the age of nine, and has never stopped writing. She recently finished the first novel in a planned four-books series and hopes to have it published soon. She spends her days in the “exciting” world of corporate finance, where she uses her creative talents in more mundane pursuits.

Carrie is a Colorado native who lives near Denver with her husband, two sons, an unreasonably intelligent Siamese cat and the world’s most timid German Shepherd.