Rule #1: Don’t ask them how they died

Mandy died young but it wasn’t truly tragic. It was in the sense that she was ten years old and would never learn to drive, sure. However, when you looked at how she was being raised (parents in and out of jail, drugs, etc.) she was almost certainly better off hovering above the ground, a spectral little thing giving high-fives and fist-bumps to a lonely guy like me (that’s not, as you’ll see, as creepy as it sounds).

We were having fun until I made the mistake of asking her what had happened. She vanished for three weeks. Truth is, I didn’t notice at first. My partner Jason and I had been arguing a lot. He wasn’t staying at the house anymore and, every other night he was out at a bar with his other friends. I had lost interest in dance floors and collared shirts with nothing underneath, but part of him hadn’t.

Netflix became a regular thing for me, with Jason only coming over on nights that he was too tired from previous jaunts with his trashy, club-kid friends. I should have taken his key, but I didn’t. So we argued, which led him into a three-day bender that he would later blame on me. It was during those three days that I had noticed Mandy’s absence. Define irony: a ghost who haunts you by not being there.

She came back eventually. I woke up one day and there she was, sitting at my kitchen table all bluish and translucent, eating a bowl of Cheerios. I think I was more amazed at the fact that she was actually eating cereal and there weren’t droplets of milk forming a puddle on my floor. I could even hear the soft little clang when her teeth hit the spoon.

I made some toast and sat across from her while she finished her breakfast. After she slurped the last of the milk from the bowl and backhanded the dribble from her lips she said, “Nice words or no words.” I wondered if all children were eternally bratty.

Rule #2: Don’t Introduce Them to Anyone

Befriending a ghost is the equivalent to winning the lottery. You buy tickets (do grave rubbings), buy more tickets (use a Ouija board), buy even more tickets (take nighttime cemetery photos), and hope that someday your numbers will appear. When they finally do it will come with a massive amount of pure excitement and splendor. The first thing you’ll want to do is to tell someone. Don’t!

Like other little ghostly people, Mandy trusted me to not tell the world about her. To let her just exist in her state of purgatory until she was either ready to see someone else or ready to move on completely.

That worked until Jason came over unannounced. Mandy and I were out back on the wooden porch swing laughing and talking. Her feet were hanging just above the ground, and anytime she would get close to her toes touching I would kick off and start swinging.

“Alan?” I heard my name through the screen door and turned to see Jason standing there. “Who are you talking to?”

I took a quick look, but I knew she’d be gone. Indeed, there was no little ghost-body next to me, just a vacant seat on a porch swing.

“We need to have a conversation,” he said. I looked up at him, still swinging back and forth, the creaking sounds of the chains providing punctuation between each of his words. “You don’t call me anymore. I’ve been over a few times and heard you upstairs laughing with someone.”

I pursed my lips and continued rocking, disengaged from the conversation entirely, wondering where Mandy was hiding.

“Greg,” I said instantly, surprising even myself.

“Your friend from the bar. Oh, I’m sorry, you wanted to know who I’ve been seeing. Well, the honest answer is no one.”

“You wouldn’t believe me if I told you.”

“Stop screwin’ around and tell me, Alan.”

“Fine.” I exhaled sharply. “You want to know what’s been going on.“

And like that, like I summoned her from nowhere, Mandy appeared behind him, shaking her head furiously from side-to-side with a pleading look on her face. All my anger deflated in a second.

I raised my arms and shrugged, exaggerating the motion like a petulant child. The disbelief on his face only lasted a second. He snapped something crude at me, but I let it roll off and waited for him to storm out. When she was sure he was gone, Mandy rushed forward and hugged my legs with an intensity I imagined only living things could have.

Rule #3: Let Them Win At Monopoly

Yes. Even a ten-year old will pound her small spectral fists on the table when you put a hotel on Boardwalk.  Flippin’ Monopoly, man. 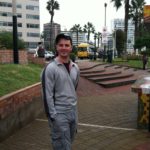 Benjamin Thomas writes from New England where he unequally balances time between hiking, concerts and quoting seemingly random movies. His stories have appeared in several print and electronic publications over the past few years. Get in touch at bthomas7.weebly.com or on Twitter @jigsawkid7.