To the Sirens Michael Patrick Brady

The wind picked up just as my father wrenched the weathervane from its perch atop the barn, and for a split second I thought the mottled, metal rooster might work itself up into enough of a spin to tip him off balance and send him tumbling to the ground below. But he was too cautious and too careful and braced himself against the ridgeline until what little momentum the bird had petered out. I was disappointed. I was sixteen.

It was all so stupid. I didn’t need a weathervane to know which way the wind was blowing. I could watch it tearing though the leaves of the two colossal oak trees that stood astride the house or take my shoes off and let the parched, yellow blades of grass tickle the sides of my feet as they bowed. I could roll up the sleeves of my shirt and let it course over my bare skin in teasing gusts until I broke out in goosebumps all over. He’d have to fell the trees and pave the grass or sew my cuffs shut and knot the long tendrils of my hair together in a thick, French braid. He just might—he was getting desperate.

I’d run off three times already. The last time, I’d made it about two miles in the driving rain before he caught up to me in the pickup truck. He’d been watching the weather reports, hoping to anticipate my next breakout, but it was no use. I could feel the pressure drop long before the first clusters of tall, dark clouds bloomed out on the far horizon and smell the ozone in the air, the sweet, burning smell of the sky ripping itself apart. When I slipped out the back door, my bed sheets were hanging limply from the clothesline, with nary a ripple to be seen. I had a good head start before the tornado sirens began to sound and he realized I was gone.

When he caught me, I was soaking wet and had torn my jeans from ankle to thigh on the barbed wire fence that separated the homestead from the hay meadow.

“Where did you think you were going?” he asked.

I wasn’t sure how to explain.

It had been a hard summer, with long stretches of wearying heat punctuated by violent storms that seemed to materialize at will all over the county. Whip cracks of rolling thunder and vivid streaks of lightning that set the brush alight; hail that fell like icy fists and rattled the beams. My father worried but I marveled. The storms cut across the landscape with an imperious grandeur unlike anything I’d ever seen. Something had awakened in me. I was smitten.

The newspaper was full of lurid descriptions of the destruction, and I read them over and over. When a burly cyclone toppled the coal silo in Ponkapoag, the haze that hung over the town was so inky black the photo on the front page bled all the way through to the other side, spoiling the letters to the editor. I stuck it to my headboard with Scotch tape.

In school, we drilled first thing every morning, thirty-two teenagers huddled together against the cinder block wall of the classroom, all sharp elbows, knobby knees and wandering hands tugging and poking at one another while the teacher vainly tried to maintain order. After that, I could barely focus, instead spending most of my time in class doodling funnel clouds in the margins of my notebooks. In my darker moods, I’d lean into the pencil, crushing the tip of the lead till it cracked and blunted, giving my whirlwinds a bolder, more malevolent appearance. But most days I favored more graceful cyclones, with gently curving arcs and wide, welcoming bands of negative space. I liked the way my name looked all tangled up in the midst of the gyre and I’d sign each one, embellishing the letters with little cursive curlicues.

The night after the weathervane came down, the wind licked at my window with short, sharp taps. I put my cheek to the pane, to feel the reverberations through the cool glass and each little ping sent a shiver ringing through my bones. When I found sleep, I dreamed I had fallen into an ocean of tall ryegrass and fescue that rose up to my shoulders and enveloped me, tousling my hair with bits of hay and grassy florets. Purplish panicles fluttered as the wind moved over the meadow in great waves, and I was lifted from the ground, my bare toes skimming the prickly tips of the grass as I floated weightless on the breeze.

My father left the television on over breakfast, and we sat together listening to the weatherman describe the vivid Doppler swirl that showed the projected path of the latest storm. It cut across the map in a bloody red streak, the color denoting its intensity. My cheeks flushed to match. The storm’s long arms stretched outward. I felt butterflies in my stomach.

My father shifted in his seat, and without looking up, said: “You’d better not.”

As I glared at him, I imagined static electricity crackling furiously between the ends of my eyelashes. I took long, deep breaths, and each time I let one go, I wished that it would knock out the flimsy walls of the house, exploding them into a billion little splinters. I struggled to keep my composure and harness the turbulence I felt roiling within. I began to understand that what I’d been looking for wasn’t out there, among the storms. It was building up inside of me, threatening to emerge. It was a blazing force of swirling energy, a spinning dynamo ready to lay waste to everything that stood in its way. An eerie calm suddenly came over me.

When my father looked up at me, I smiled. Because I knew that the next time the sirens rang out, they would ring for me. 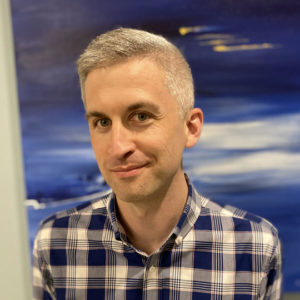 Michael Patrick Brady is a writer from Boston. His short fiction has appeared in Smokelong Quarterly, CHEAP POP, Ink In Thirds, Akashic Books, and McSweeney’s Internet Tendency, and for many years he served as a book critic for the Boston Globe. His work can be found at www.michaelpatrickbrady.com.