Together We Will Burn Forever Micah Hyatt

I wake in the debriding tank screaming, thrashing, choking on body fluids and saline. The ship’s soft medical manipulator arms try to keep me still. Milky strands ooze from my cracked flesh like the heat-thickened proteins of a poached egg.

In my mind, I am still holding you. I search for you in the cloudy water, where swarms of nanomachines are eating my blackened flesh, peeling me layer by layer. But I can’t find you, and I can’t remember where you’ve gone.

We were in the capture bay when the alarms went off. Careless as always, you forgot your tether. I had mine. When the hatch blew, I grabbed you tight, thinking you’d be pulled into the dark. But the blast pushed you against me and bathed us in flames.

The ship tells me the recovery process will be easier if I think of a pleasant memory. A beach. A sunset. A walk in the forest. You’re with me in all of them. It feels like you’re here with me now, still in my arms.

My arms are blackened stubs of bone.

A battery of syringes poke me from all sides, administering anesthetics. Blood and pus and flakes of charred skin swirl in the tank. Pieces of our suits. “What happened?” I ask the ship. My lips are swollen so they hardly move. But the ship understands.

“You were in an accident. The captain did not survive. Scans indicated the asteroid was inert, but the retrieval process released boron decahydride, a pyrophoric gas. The oxygen atmosphere in the capture bay ignited on contact. Damage to the ship was minimal.”

Minimal. I curse the ship with every word in every language I know. Scream and thrash until it hits me with sedatives and anti-psychotics.

If the blast killed you, why am I alive?

“Patch me into your sensors.”

When the neural bridge is established, I close my eyes and see through the ship’s. The planet revolving below is an ugly brown ball streaked with chestnut clouds where short-lived hurricanes of fire spring incessantly in and out of existence. I chose it because its rings were likely to hold riches. You only agreed, after rejecting so many others, because you said it was a lovely thing to look at. It reminded you of my eyes. Such a silly thing to base the decision on. Setting out for such a far flung planet meant fifty years of hibernation together, leaving everyone and everything we knew behind. A bigger commitment than marriage.

We’ll sleep together every night, you said, laughing.

The ship complies. The engines hum. The juices in the debriding tank slosh and foam.

The planet fills my vision. I watch volatile hurricanes spin across hydrocarbon seas for the longest time, wondering how you could have seen beauty in this awful planet.

“Show me the event,” I tell the ship.

I watch the footage of you dying a dozen times. In slow motion. From all angles. When the atmosphere in the capture bay ignites with a flash, there are no shadows except yours, and I am standing in it. It happens so fast I doubt you felt it at all. But there is a moment when you realize something isn’t right. You look up and meet my eyes. Your eyes are fearless and blue as Neptune. Is that because you saw in my eyes what I felt in that moment? That if I could just hold you and refuse to let go, everything would be all right?

I rotate the feed and watch me watching you die. My eyes are dirt brown and shining with reflected fire. The blast slams us into an embrace. Our helmets crash together, and we are flung backward into the bay. My arms, still wrapped around your waist, are the only part of me not in your shadow. The boiling air shreds them like confetti.

You are so beautiful, turning to ash inch by inch. When the wave of heat reaches me I am merely scorched. I collide against the back wall and crumple into unconsciousness with a stick figure version of you on top of me.

I understand now why I lived and you didn’t. You were my shield.

“Take us down to the surface,” I tell the ship.

“The captain’s override is required.”

“That is not the protocol established by the captain.”

I punch the walls of my tank with my nubs. I force my head beneath the water and try to drown. Soft robotic arms wrap around me, lift me above the surface, and hold me tight. I scream and sob and feel the sting of syringes again.

“What protocol?” I ask, fading.

The ship tells me.

I sleep for fifty years, dreaming that the ship obeys my last order. As we dive toward the ugly planet, friction rips panels of compressed resins from the hull like a knife scaling a fish. Systems fry. The external cameras wink out one by one, but the last one survives until we are a few hundred meters above the billowing surface. I order the ship to fire the engines. Nuclear flames ignite the hydrocarbon ocean. The atmosphere blazes. The planet becomes a star.

But in some far away part of my mind, I know it isn’t true. I remember the protocol. Your arms are the ship’s, and you are holding me. 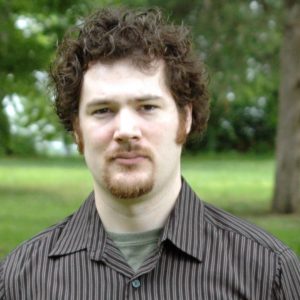 Micah Hyatt’s short fiction has appeared in Deep Magic Magazine, Little Blue Marble, and Daily Science Fiction. His favorite books are those that take him to fantastic new places and show underdogs overcoming their difficulties. He is a graduate of Seton Hill University’s Writing Popular Fiction MFA program. You can find him @MicahJHyatt on Facebook and Twitter.