The day after the Russians launch their satellite into space, Jacqueline and I skip school and hide in her attic. We spend hours looking through all the junk her mother keeps up here, chew Turkish taffy and cherry lumps until we feel sick, and tell each other all of the worst jokes we know—including the ones Frank learned when he was in the army and made me and Martin swear up and down we’d never repeat to anyone before he told them to us. Of course, I tell them to Jacqueline anyways, and the sound of her laugh is like a tickling feather until I can’t help but laugh too.

“Ssh, ssh!” she whispers, afraid that someone’ll hear us, but I can’t stop, and finally she claps her cherry-scented hand over my mouth to muffle the sound. It’s as if the feeling of it steals all of the air from my body all at once, and for a moment, as we lay still in the hushed, sunlit attic, her fingers warm against my lips, there’s nothing else to the world but this lack of space between us. If the Soviets drop an atom bomb right now, our whole town will disappear, and we’ll still be right here, Jacqueline and Stella and a bag of cherry lumps.

“Stella Elaine Collins,” Jacqueline says, sitting up and shaking her head at me.  I blink and sit up too, surprised by my own foolishness. If the Soviets really do drop a bomb, we’ll be very, very dead. Besides, I don’t want to think about that now. That’s the whole reason we’re not at school, the whole reason we’re eating candy in the attic and not discussing Shakespeare in some windowless classroom. The Sputnik launch and the Soviets are all anyone can talk about, and we don’t want to talk about it.

“Jacqueline Jane Bryant,” I say, and she wrinkles her nose at me. She hates her middle name—apparently it’s ‘plain’ and the two Js are ‘ridiculous.’ But I like it.

“If Margaret Collins knew the sort of jokes her daughter’s been telling,” she says, “she’d wash out your mouth with soap.”

“And if Dianne Bryant knew the sort of jokes I’ve been telling, she’d never let me near you again,” I say.

“Which would be tragic, of course.”

Jacqueline grins and pops a piece of taffy into her mouth. Talking around it, she says, “I still can’t believe Frank taught you those.”

“Martin begged him for weeks,” I say, reaching for a piece of taffy—not because I want one, but because I don’t know what else to do with my hands. My brother Martin is just two years older than me, eighteen now, but my brother Frank was grown when Martin was still knobbly-kneed and I was missing my two front teeth. Martin worshipped him back then, of course: his strong, clever, funny older brother. Sometimes I think he still does, at least a little.

“Martin,” Jacqueline repeats, smiling that smile, that one I’m not so sure I like. “Martin’s grown up since he went to college, don’t you think?”

I shrug. “He still seems like Martin to me.” That’s not quite true—he’s certainly not knobbly-kneed anymore. But something about her tone of voice makes me want to be belligerent on purpose, as though I’m talking to my mother and not my best friend.

“He doesn’t call me Jackie anymore,” she says, and I swear she’s not really talking to me, but someone invisible standing behind me, someone who exists only in her own thoughts. “And he looks so much older now, with his shorter hair …”

“Do you think he likes me?” she says, and I close my eyes and try to find my way back to childhood, back to blue skies that didn’t threaten to crack open at any moment, back to Martin teasing Jackie and her saying that she hated him, back to a time when cherry candy tasted like summer instead of all the things I’m not allowed to want.

“Do you think a bomb is really coming?” I say, instead of answering, and I can feel her frown even if I can’t see it.

I’m expecting her to say once again that she doesn’t want to talk about it, but when she answers, her voice is summer-breeze-soft, violet-petals-soft, and her answer is almost, almost, almost what I want it to be.

There’s a smile in her voice when she says, “Go see An Affair to Remember even though my mother thinks it’s scandalous … Wear a short red skirt even though my mother thinks it’s scandalous. Eat a whole chocolate cake all by myself. Jump into the downtown swimming pool in nothing but my nightgown.” She pauses. “Kiss someone.” My stomach twists. “What would you do, Stella?”

It’s so quiet here, quiet enough to hear the difference between my shaky breathing and hers, and as I sit with her question echoing in my ears, with the smell of cherry candy in the air and the sunlight on my skin, with her sitting so close to me, asking me what I would do at the end of the world, all I can think is this, this, this. 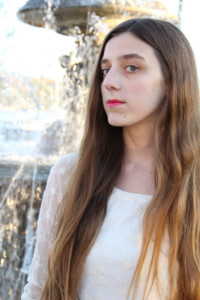 Lillian Ward-Packard is a student, barista, and public library enthusiast from small-town Wisconsin. She loves murder mysteries, thunderstorms, and YA fiction, and when she’s not working on one of her novels, she can be found obsessively trying to make the perfect cappuccino. If a book involves mermaids, she’s probably interested. Her sporadic blog posts can be found at https://lcwoodbury.wordpress.com/, where she writes under a pen name in hopes of avoiding people from Real Life. Tomorrow and Tomorrow and Tomorrow is her first published work of fiction.