When the ship’s captain and the fat man who brought us all here stood together on the dock, talking low, I should have taken it as a sign. Their hands jabbed the night air in anger, and a murmur passed through me that my husband and I had made a mistake. The shuffling crowd propelled us forward. There was no choice but to move with them.

Glints of uncertainty passed among the crew as we all boarded. Instinct compelled me to step back, remain on land. I glanced at my husband for his agreement, but he set a grim smile, tugged my hand, and gave a subtle yet sharp nod of his head. We’ll risk it.

And so we squeezed in with all the others—backs, shoulders and knees touching. Touching strangers.

Once the morning had paled the night waters, my husband took out the postcard from his inside pocket and held it in his lap. His thumb caressed its creases. Neither of us had slept—my stomach was too bunched with worry. If the vessel capsized, I wanted to be ready to swim. He put his arm around me, and we stared in silence at the picture: a lake in Java with a beach. A small flock of tourist huts skirted that side of the shore, and mist lingered amid the trees on the surrounding mountain slopes. An empty deckchair sat alone in the middle of the sand.

My seat, my husband had written back late one night. He’d sent the letter by clandestine post. That’s where I’ll live out my days. Be sure it is empty when we arrive.

That’s where we were headed, to live with our son. He said he could find us work, if we could escape.

I put my arms around my husband and hugged him tightly.

Weeks passed and we clung to that postcard, even though the tropical sun paled the image and darkened our skins until they peeled like the paper bark of a cajuput tree. The hope that we might make it to Sumatra faded too, trapped on this craft as we were—weak, rations low. For us passengers, at least. The crew seemed strong, able. But we were too old to fight our way through the young men who dived upon and snatched up our daily provisions and could only scavenge what little we found overlooked on the floor. If we were quick.

People were dying, dehydrated, sick, starved. We’d stopped covering our noses when they relieved themselves overboard, barely glanced when their bodies were rolled into the sea. More food for us—we recognised the cogs turning in our neighbours’ eyes, to our shame. What little good it did us.

Our ‘liberators’ honed the same mean glare as the military slavers of home. They were not going to share. And especially not the man in charge, whose heteroclite bulk amid this kettle of scarecrows no doubt came from years of feasting on misery and fear. Smugness mooned from his fat face—as did the shine on his chicken greased lips. Belu.

One day, tensions whipped into a tempest, snapping what tenuous tethers were left. The usual melee of arms over rice and hacking voices for water became a scuffle, fists flying. Men toppled onto us and sprang back up only to tumble down the other end of the boat, a roll of tangled brown limbs and snagged t-shirts thumping the planks.

There was shouting, so much shouting.

Blood slapped onto the wood, our backs, our knees.

Belu hacked and hacked at a young man’s back with a machete, its blade wide, silver catching sunlight while crimson arched wet and thick in the air.

Other crew members, they slashed and sliced too.

People were jumping out of the ship—women, children, grandmothers, fathers. My husband dragged me by the shoulder, the cloth of my dress bunched firmly in his fist. We scrambled as far to the bow as we could, ready to bail out ourselves. But they stopped. They glowered. Their eyes said no more but they never said a word.

At the edge of the boat, a child screamed for her parents, her arms outstretched to the V of foam and blood speeding away behind us. Belu stroked his thumb on the knife’s handle, his attention tugging from us to her.

I grabbed her, brought her down to us before he decided to push her over. It took just minutes until we could no longer see the silhouettes of heads bobbing above water.

The child cried until I thought she had died. I kept her to my chest, stroking her head. No more than nine and already seen more than was fit. She sat in between us, our arms tightly embracing our trio, even though emptiness swelled in the spaces around us.

In the following days, we showed her our postcard and told her over and over of the beach and the bungalow where we would live. She would have her own boat to go fishing on the lake and bring us all supper in the evenings.

‘Could I have a cat?’ she once asked, the first thing she’d spoken.

I kissed her and said, ‘Of course.’

Every day for a week we talked of our lake, until one night when the siren came and the big boat pulled up beside us.

‘Be sure to tell them you’re our daughter!’ I whispered. ‘Remember, or they’ll take you away from us.’

When we arrived at the refuge, their brows insinuated our lie by our age, but they accepted it nonetheless. And so now we must wait.

Our postcard is pinned to the wooden chair—the only furniture we have by our beds. My husband took a pen and redrew some of the details. He also added a boat.

Somehow, we’ll make it to the lake, the chair, and the cat, us three. Strangers. 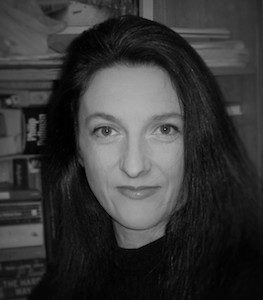 C E Aylett is a British author living in France, in servitude to two kids and a cat. A progeny of the 1990s UK rave culture, she traveled much of the world before settling back in Europe to renovate a house and start a family. Starved of the house and trance music scene, and of music that generally doesn’t involve an accordion, she was bludgeoned with nappies, meal planning, and ABC, plus an enormous amount of cuteness. A compulsion for writing fiction soon emerged to keep her entertained and on the ball. Her tastes are eclectic, and she is just as likely found performing air guitar in the kitchen to Iron Maiden, or caterwauling to Arctic Monkeys, as she is curled up on the sofa reading Her fiction often explores the grayer areas of human nature, varying between dark realism, wry humor and a fascination with the fantastical. Her first published work Feet is available on Kindle.

Links to her work can be found on her website at http://francespauli.com