Her first gift was palm-sized and heavy, wrapped in black silk and tucked into my hand as she passed. I’d seen her before, her face always hidden behind cheap sunglasses, and she’d ignored me the way everyone ignores overweight, anxious men having a cigarette before work. As though they might catch my appearance like a disease. But she wasn’t wearing her sunglasses that day, and her eyes looked puffy and red, as though she’d been crying or drinking or both. I was too surprised to speak, and she didn’t say a word. Her hood rose from her jacket in piled layers, like a hive of bees, and as she turned the corner it was the colour I was left with. It was the purple of a chemical spill, lightning behind a poisonous cloud. It seemed viscous and fluid in the gloom of the alley.

I check my phone. Eight-thirty. Not long to go. Out on the street, past the scalpel-edge marker where the sun reaches the ground, people pass on their way to work. My office is in the building beside me, and I keep myself against the wall, invisible. I called in sick an hour ago. My cigarette’s the third of the day; it burns my throat and my fingers are yellow again.

When I opened her gift I found a pocket-watch, its silver tarnished with age. There was an inscription on the back; I couldn’t read it. The spindled hands were translucent and watery, like spun glass, and I should have known then that something was up, for they were moving backwards.

I saw her again a few days later, and stopped her. Her eyes were very dark beneath the hood, like spilled ink.

“It’s for you,” she said, when I held out the watch, and her voice tore something in my stomach. Why? I wanted to ask, but my tongue was dry and then she was gone.

I was given a raise that day, for the success of a project I’d all but forgotten. There’s more about you than meets the eye, Tom, Big Rob said and squeezed my shoulder.

The gifts came frequently after that. Sometimes she would give them to me herself, place them in my hand without a word, drop them in my pocket as she passed. Sometimes they would be waiting for me when I arrived, a neat little parcel beside the storm drain, never stolen. I wanted to give them back, but when I saw her, my arguments died in my throat; I wanted to leave them there, let her take the hint that way, but I always took them.

A pocket-book, filled with pages of handwritten French, with dates and dried flowers.

A coin in a scarlet purse, bronze with a hole in the middle, that turned to tar on the kitchen counter.

Half a photograph, once, of a girl in a yellow sundress, that was creased and stained as though it had been carried in a wallet or thrown out with the trash.

A dog toy that had lost its squeak.

A child’s palm-print, inked on white paper, which grew and spread and faded, turning to dust before a week was out.

Twenty to nine. I light another cigarette. My hands are shaking a little.

I have never trusted the neatness of stories, nor do I believe that correlation is causation. Umbrellas do not cause the rain. When I won an award for my work, prestigious and with a tidy cash bump, I told myself I’d earned it. A promotion came, and then another. My sister found a publisher for her novel. My father’s cancer went into remission. The eczema on my stomach disappeared, the stubborn pounds shifted themselves from my gut with barely an effort. I felt good, better than good, and it made me nervous. Umbrellas may not cause the rain—but, in a way, rain does cause the umbrellas.

The gifts began to pile and collect in the corners of my apartment, my coffee table, my kitchen counters. Friends would ask questions that I had no answers to. I brought home a packing box one day, intending to store them all at the back of my wardrobe or leave them out on the street. I never did. They littered my windowsills and my dressing table; my books went into the box and gifts filled the shelves.

Like a museum, my friends said. A mausoleum. I stopped inviting them round.

Ten to nine. I light my last cigarette.

The rest seemed inevitable, unsurprising, extra minutes when the game has finished. They started speaking to me, of course, and each of them told a story. Small lives and forgotten moments, lingerings for people who have moved on. It was difficult to sleep, with that murmuring in my ears, so I drank coffee. It was hard to eat, and food made them envious, so I smoked instead. I burnt one, once, the French diary and flowers, and my sister’s book deal fell through. When the hand-mirror (black pewter, ringed with black stones) showed me a face that was not my own, I raised it up to smash it on the corner of the table, like killing a venomous snake, but then I thought of my father, his PET scans and his oncologist’s confusion, and I placed it down with care.

I began to study the hours on that first gift, and it would stop the voices, for a little while. The hands held their own pattern, ticking backwards, but never coming together. And with the ticking came a suggestion, a suggestion that became a certainty—I’d had my blessing, and it was soon the time to pay for it. To pay it forward.

I pull it out now. The hands are all at twelve. Almost. A few seconds to go.

I should have called my father.

As I hear the footsteps approaching I stamp out my cigarette, wonder what gift I’ll provide, who I’ll be given to. 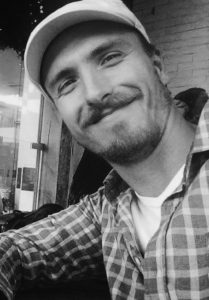 Joe Parker was born in Thailand and spent his childhood on the road, traveling with his family’s voluntary group to refugee camps and schools across Europe and southern Africa. He has lived in the UK, South Africa, Italy, and Australia, and is now based in Wellington, New Zealand, with his partner and a cat with far too much personality. His guilty pleasures include bad horror movies, writing down stories, and drinking far too much coffee.