Freedom Lies in Being Bold

If We Live to Be Giants

The first is a boy of only twelve summers. He smells like rotting fruit, his shirt bruised with blood and bile, and I know from the look in his eyes he intends to kill me. I put an end to his suffering as quickly as I can. A mercy, I tell myself.

Afterward, I smooth over the earth where he dragged the ax behind him, too weak to carry it.

Some claim whole cities wither where I walk, and I have indeed seen the sick laid out in the street, their bodies curling in pain like the legs of a dying spider. But I am not responsible for those events of mass plague. My touch infects, but does not always kill, and whatever else is said about me, I do not spread myself like poisoned cream for others to choke on.

I stay within the forest where it is safe, keeping away from towns and roadside inns, any place I might encounter others. My presence does not harm the trees, though early into my exile, before I learned how to properly wrap myself for sleep, I often woke to some woodland creature dead at my feet, punished for sniffing my cheek in the night. It was a fox the first time. I buried it, unable to meet its black, empty eyes as I dug. And the next animal after that—a squirrel, if I remember.

That is how the bereaved hunter finds me, tracking me by the graves I leave behind. Earlier in the month, I ate a poisonous mushroom by mistake and grew so sick I could barely move. Unable to forage but unwilling to die, I staggered into the nearest village, where the man’s brother, a kindly physician, and his wife cared for me. As soon as I was well enough, I left, but by that time the couple were already sick.

The hunter holds me at knifepoint, telling me all the gruesome details of how they died. I wish I could shut my ears to his ranting, but it would do no good. Death has followed me since infancy, and it manifests unpredictably. One day the sickness sprouts boils on the skin, the next it fills the lungs with blood.

“Why do you think I live alone in the forest!” I scream. They are the first words I have spoken in a long time, and it feels good to have a voice again, even if I sound like peeling bark.

He hesitates to kill me because I am a woman, and I hesitate to stop him because I am tired of being the only one who walks away. But in the end I have soaked in too much of the forest; its strength has become my strength, and I share its desire to live. Before the hunter finalizes his decision, I grab his arm and turn his blade back on him.

When the warmth of the day finally thaws the ground, I bury him, too.

The sun is high, but the wood wet and dark when I meet a young man fighting his way through the brush. With a shy smile, he tells me he is a baker’s apprentice, sent into the wood to fetch fruit for a pie; might I be able to point him in the direction of some blackberry bushes?

He is handsome, and I have been alone a long time. I let him get too close, and as I point out the blackberries, he brushes some hair from my face, countering the wind. His fingers linger on my cheek, his expression hopeful, and the damage is done.

I should run, but instead I lead him to my blood-red mouth, and let him take me there on the ground, the grass slashing my thighs. After, when he is struggling to thank me, I start to ask him his name, but he raises his arm, coughing brutally into it, and I flee as he is begging pardon.

I never knew my mother.

All the stories agree she was very beautiful, but stories always say that about queens. I think she must have been very stupid. She laid this curse upon me unwittingly while I was still in her womb, half-formed and vulnerable to dreams purchased at needlepoint. Three drops of blood. That was all it took. Give me a daughter of unapproachable beauty. Her lips crowd with blood, her hair grow raven-black, and let no one ever harm her.

The forces of magic in my kingdom are not the same as they are in other lands. Here, magic only rots. My mother should have known better than to say such a prayer, knowing how easily spells fall from royal lips.

Within a week of my birth, my mother died, and although my father always maintained that she reached out to me in her final moments, I have never shared his conviction that it was in longing. Far more likely, she meant to smother me.

Unfortunately, the sickness took her first.

I know I have made a terrible error in judgment, just like my mother, but I make it again with the next man whose knife-sharp eyes catch me alone, trading on his ignorance to save my life. I barely understand my growing need for company, and certainly fail to anticipate what it might mean to have someone to love, that revelation coming months later.

The labor is long and hard, but I am determined to do it alone, unwilling to sacrifice any more innocent lives, even if it means my own survival. At labor’s end, I lie back against a damp patch of earth, holding the first life I have ever created, my mind still scabbed in doubt.

I dare not speak my hope for this child aloud. The magic is too close. Listening.

My daughter takes her first breath, and I wait, holding my own, to see whether she will scream or choke. 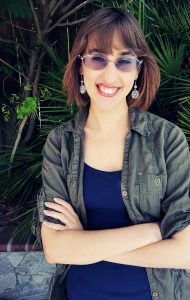 Hayley Stone is a writer, editor, and poet from California. She is the author of the sci-fi novel, Machinations, which was chosen as an Amazon Best Sci-fi & Fantasy Book of the Year for 2016. Her short fiction and poetry have appeared in Fireside Magazine, New Myths Magazine, Factor Four, and various anthologies. She has a forthcoming story in Sword & Sonnet: An Anthology of Battle Poets, and new poetry coming out in Wild Musette and Star*Line later in the year. Find her at www.hnstoneauthor.com and on Twitter @hayley_stone.