The violin had curves like his mother. Electric guitars hung from wires as if dropped by angels, while trumpets blasted from all four corners of the display window. In pride of place, a glossy red drum kit crouched, motionless, like a heart waiting to beat. Struan pressed his hand-knitted, lumpy mittens to the icy glass, drinking in the view. The wind slid frosty fingers under his thin clothes—a threadbare Ramones t-shirt which had once belonged to his da, and charity shop jeans, neither thick enough to stave off the chilled air—while his little brother swung a scuffed and torn backpack around in a circle, eyes on the darkening heavens, ignoring the loud tuts of passersby who were forced to step into the road to avoid an accidental belting.

Everything in the shop window was out of reach; the black flute with the white tip, bursting from the left like an unlit firework. The fanned-out, pristine music books—not a single dog-ear or crumpled cover among the lot. Individually, he coveted each beautiful instrument, but what he desired most of all was to hear them join together in harmony. Cooperation towards a single perfect goal was an unattainable concept at home, but in an orchestra, amidst the gleaming music stands and the soft hush of turned pages, fusion would be a palpable thing. Incontrovertible proof that unity and stability existed, somewhere.

He stayed as long as he dared before Declan, bored of the familiar display, hammered the pedestrian button at the traffic lights. Hatless, they walked home; Rudolph noses glowing, cheap trainers sticking to rimy pavements. Ma cut up a single Granny Smith in rough strokes without taking her eyes off the soaps on the television. The knife slipped a couple of times. Flecks of blood spattered Struan’s apple slices, but he ate them anyway because if he said anything, she was likely to shift the entire lot into the bin or hand them over to Declan, who would eat off the floor in a mineshaft without complaint. Besides, a conductor was like silent glue, holding the orchestra together. Never complaining, never causing any fissures or ripples, smoothing the passage from one brassy instrument to the next.

Da was on the nightshift again, so they had to sit quietly and do their homework. Even the TV was down as low as possible; the subtitles were on, even though Ma didn’t like to read. When Da finally emerged from the bedroom, a waft of hot, greasy sleep billowing from his open robe, Ma got up from her armchair. In the hallway, his parents sidled past each other like undecided rams; chins down, heads tilted, weighing up the odds of injury. Sometimes fights ended in rutting, but more often than not, someone bled. He craned through the open door and chirped a greeting, deflecting attention onto himself, and breathed a sigh when his parents passed into different rooms.

Declan kicked at invisible enemies, making the couch jiggle, and whined about missing his cartoons. Struan passed over the remote and slid off the sticky leather, snuck past the doorway leading into the kitchen, where Da sliced the heads off fish and tossed them into the sink. A callous executioner. A big pot of peeled potatoes were boiling—it smelled better than the eye-watering stench of the fryer. Chips often came out too-skinny and too-tanned, like the teen dragons who guarded the salon on the high street. Long, turquoise claws, to match their painted eyelids.

He crept along the hallway, fingers strumming the wall, until he reached his tiny bedroom. Little more than a cupboard, really, but he’d crammed it full of invisible music; soft skeins of clarinet solos, swinging from hole to hole in the patchwork ceiling. Plastic building blocks of double bass notes piled high on the flaking windowsill. Liquid glass pooling in a chipped mug, poured sparingly by a harp duo in long glissandos. He sprawled out on the bare mattress, hands conducting in sharp, defined strokes.

Brass coming in here, strings rising just so. Percussion to the right. The space around him contracted into a single portal, shimmering like a blown bubble. Beyond, a wide wooden stage, whispering his name. Struan stepped through onto the boards without hesitation, rolled his shoulders. His old clothes were gone; now he was swathed in a black suit and a white shirt, gleaming brighter than anything his ma had ever bleached. The captive audience of fish heads stared up at him, bug-eyed and awestruck. A baton in his hand, sturdy and powerful, as if it had always been there.

The music rose around him, painting the air in colour. A yellow C, repeated twice, followed by a minor chord in burgundy. A thin pink melody swelled through the cerulean fog. One deep breath. Through the portal, his name resounded; a bass note, wrapped in salted steam. His cheeks were wet; his small chest heaved with the effort of keeping the desire contained, of keeping reality at bay. A building crescendo waxed, soaring high above his head, into the rafters and through the terracotta tiles of the theatre. Final notes fluttered down like plucked feathers. His lungs ripened in rose petals, drowned in cloaks. Fish heads cheered wildly, applause bleeding from invisible fins. He held the baton high to extend the last exquisite moment before the lights blinked out.

One day the orchestra would be in his hands and not just his head. An artist without a canvas, his music teacher had promised, is no less of an artist. 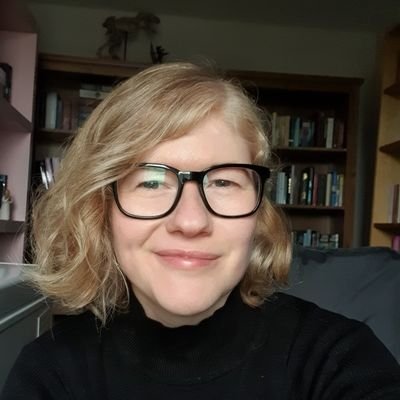 Lindz McLeod is a queer, working-class, Scottish writer who frequently dabbles in the surreal. Her prose has been published by the New Guard, Cossmass Infinities, and more. She is a member of the SFWA and is represented by Headwater Literary Management. Visit her website at lindzmcleod.co.uk